One Small Step for Film, One Giant Leap for Diversity?

With the immense success of films such as Black Panther paving the way, the film industry is given an opportunity to explore stories of people of colour.

There has been more diversity in films than we have seen in a long time. The path to diversity appeared to be off to a rocky start in 2017 when live-action films Ghost in the Shell and Death Note were both criticised for white-washing, but the film industry seems to be more aware of the prevalent diversity issues, as well as the growing support for racial inclusivity.

Films with people of colour in lead roles have not always been successful, but movies such as Black Panther have shown otherwise, raking in $1.2 billon USD. Not only does it portray the story of the first ever Black superhero in mainstream American comics, but it allows people of colour and minorities to feel as though their stories are being represented and told.

Charmaine Bingwa, a Zimbabwean actress born and raised in Australia, talks about what Black Panther means to her, as well as the importance of racial representation within film. 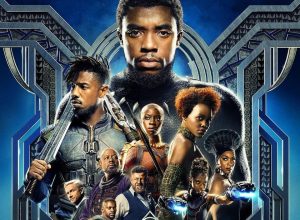 (The theatrical poster for Black Panther. Supplied by Marvel)

“I was blown away… seeing my people on screen like that, I was so proud and encouraged,” She says. “[Black Panther is] sending a message to the future generation about what is possible… I feel like the growth of community and the growth of our voices [lead] us to feel more engaged [with the movie], and celebrate it…I feel like, movies prior to that you’d have [actors of colour] playing a supporting role, and now you have an entire cast in a film—that’s so powerful.”

Wenlei Ma, film and TV critic at news.com.au, comments on the influence of film, especially for the younger generation who are still forming their views on the world.

“What they see reflected back on them normalises what they think the world should look like,” Ma says. “If you take something like Black Panther, which features a majority black cast in positions of power, that’s going to empower the kids sitting in cinemas who see that people other than the white cultural majority can be in a dominant position. It not only gives kids who aren’t white characters they can relate to; it reinforces to white kids that they’re not the only ones who are entitled to be represented.”

Kayla Sutton, of the website Black Girl Nerds started the hashtag #WhatBlackPantherMeansToMe as a way of voicing her opinion, but the hashtag trended worldwide, making clear that to many, Black Panther is more than just a film. 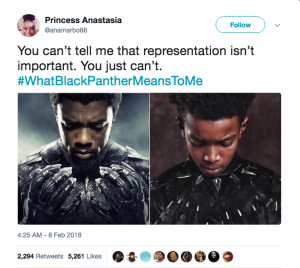 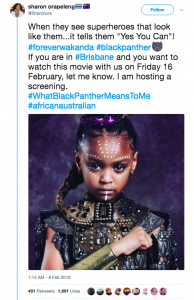 (Both photos utilising the #WhatBlackPantherMeansToMe hashtag. Photo supplied by Twitter.)

“How you represent somebody, how society represents somebody… media is such a leading force in that, so if you just sell that races are invisible, or if you don’t give them… a voice, that’s how it will be in the real world,” Bingwa says in regards to the role media plays in perpetuating stereotypes, “Media is on the forefront of creating stereotypes or creating visibility.”

And this seems to be the case, especially for those of a younger audience. Yilian Liu, a twenty-year-old student at the University of New South Wales states that as a Chinese person growing up in a predominately Caucasian community, she somewhat felt ostracised at times. 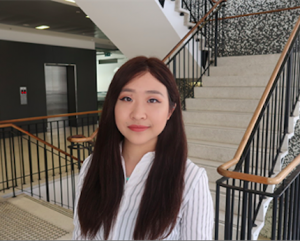 “I think [there was] a level of unconsciousness… [In movies], Asian characters were never people that reflected me,” She says. “I mean, it’s not like people were outright racist [to my face], but it was something subconscious. Ideas of self worth, or how people might perceive you based on appearance.”

The study ‘Inclusion or Invisibility? Comprehensive Annenberg Report on Diversity in Entertainment’ conducted by researched at the University of Southern California reveals that just 28.3 per cent of characters with dialogue were from non-white/ethnic groups, though such groups make up nearly 40 per cent of the U.S population in 2016. 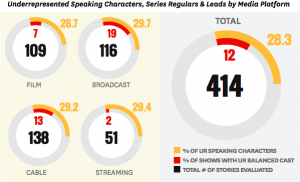 (Inclusion or Invisibility? Comprehensive Annenberg Report on Diversity in Entertainment)

However, the lack of diversity that was prevalent in film even just two years ago seems to be changing. Nick Dent, the film editor of Time Out Australia and former Sunday film reviewer for News Corp explains that it boils down to the audience wanting something ‘fresh’.

“…What we’re seeing at the moment is an emergence of more people of diverse races coming through and creating cinematic work that is reaching bigger audiences and garnering critical acclaim,” he says. “I think there’s a bit of boredom with Hollywood at the moment because… Hollywood has been seriously dumbed down in the last 30 years in order to focus on blockbusters… People don’t want to see stereotypical stories about stereotypical people.”

Many, including Bingwa, feel hopeful that movies such as Black Panther will act as a gateway for more stories of minority groups to be told.

“I think there needs to be a pathway or appetite for people who aren’t the majority telling stories,” She says. “When people are able to tell those stories, I think it’s important that people listen to those stories, so we need to be telling them…I think it’s always going to be a bit of a [challenge]. It’s hard, if it’s just one film here and one film there.”

Ultimately, the film industry still has a while to go, but the film industry and Hollywood in particular is making steady progress including a diverse range of ethnicities and portraying stories that haven’t yet been told. Though there are still many bumps and hiccups yet to be encountered, upcoming films such as Crazy, Rich Asians and A Wrinkle in Time are steering the film industry towards a bright future.

As Bingwa puts it:

“It’s not a racial superiority fight, it’s just sending a message that there’s space for all of us. It’s inclusion…It’s been a long, hard struggle, but you give your culture a reason to celebrate and it’s a powerful, powerful thing.”

By Cindy Yu Chinese international students express frustration of having to take up the double role of the victim from racial discrimination and the threat to Australian Universities. Since the middle of last year, Chinese international students have been the target of racial discrimination in schools and universities. Insulting incidents such as racist flyers towards […]