Activism is all the rage and social consciousness is the requisite.

In an age that values online activism, indifference is practically fashion suicide. From politically-motivated Instagram snaps and TED Talks, to working with NGOs and visiting refugee camps, online blogger culture has tapped into activism, eager to promote positive change.

Fuelled by technology that keeps us relentlessly connected and informed, this movement has been embraced by various industries, linking some of the biggest consumer brands, NGOs and online influencers together in campaigns. But one cannot help but wonder if blogger-activism serves a greater purpose apart from self-curation and brand-building, and begs the question: should we leave activism to the professionals, or is it open to everyone?

According to Jessica Kahawaty, law-educated Lebanese-Australian model and philanthropist with a considerable online following, the desire to inspire change is open to all.

“I definitely do see myself as an activist… I think every person is sort of an activist,” she said.

The former Miss Australia is using the success of her platform cultivated in the fashion industry to generate greater responsiveness in regards to issues that she is passionate about, such as children’s rights. One week she’s walking the red carpet with Cate Blanchett, and the next she’s on an official emergency UNHCR mission visiting some of the 625,000 Rohingya refugees in Cox’s Bazar, Bangladesh.

“There was such an educational process there where I took people through this journey with me of learning about who these people are, why they’re being marginalised and what we can do to help…When you see that you are creating positive change, I definitely do feel a social responsibility to continue.”

“It was from the heart, it wasn’t filtered…It wasn’t a polished, corporate message,” she said. 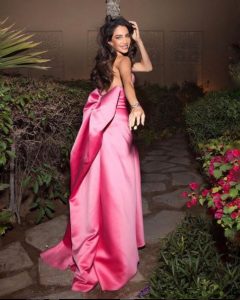 For Kahawaty, who visited the Za’taari refugee camp in Jordan for UNICEF and Louis Vuitton’s ‘Make A Promise’ campaign which raised $2.5 million, it’s about more than just promoting a brand.

‘I’ve been a friend of the brand Louis Vuitton for many years…It was always so important for me…to love the brand. I think this is why I also do have this credibility with my followers because I’ve never promoted something that wasn’t from the heart.”

“So when…I went to the Syrian refugee camp with Louis Vuitton…they were the supporting role in all this. This was about the Syrian refugees, this was…about bringing awareness to these people who are suffering and… trying not to have a lost generation,” she said.

This is not altogether an unfamiliar sight. A beautiful celebrity or model visits a refugee camp, and is photographed interacting with refugees, such as Angelina Jolie’s recent visit to Jordan’s camp.

But according to Suha Tutunji, Director of Refugee Education program for Jusoor Syria, an NGO that’s been supporting refugees in Lebanon since 2013, this is far from reality.

“People like Angelina Jolie…I don’t call them activists. They’re importance is shedding light because all the media is going to follow them…and they kind of bring back people to the reality of things.”

“They take them to the schools that are running very well…We have 335 schools running for the Syrian refugees. Maybe a handful of them are what they show on TV; child-friendly, decorated and the children are tidy.  The majority are not. They’re sending the wrong image,” said Tutunji.

Tutunji, a Lebanese native, who has over 25 years of experience in education, is an advocate of education during crises.

“I was 10 when the war started in Lebanon so I was educated in the crisis context and I know how difficult it is.”

“I’ve taken the Lebanese curriculum and I’ve…contextualised it with our particular situation…It’s not just teaching them how to read and write, it’s also teaching them physical responses, activities, games so that they are learning, and at the same time, we are looking into their psychosocial wellbeing,” she said.

As an activist who works with refugees daily in Jusoor’s centres, Tutunji implemented an ‘Identity Program’ to teach refugee children about the significance of Syrian culture.

“I started it because… if we want them to go back and rebuild Syria, they should have pride in their country…When I used to ask them, ‘where are you from?’ they didn’t know. They would say ‘I’m from Beirut…They’ve been here all here lives,” said Tutunji.

Whilst this differs to Kahawaty’s activism, she echoes Tutunji’s sentiment which is that there is an interdependency between NGOs, brands and high-profile influencers when it comes to humanitarian crisis response.

“The aid workers and the organisations need your help. They’re not saying, ‘leave it up to us’. When I went to Bangladesh, I saw the aid workers…They don’t have any days off, some of them have been working for 40 days straight…So we are all activists, whether we’re officially aid workers or volunteers or working with these organisations.”

“There are so many parts to activism…they all work hand in hand together and without one, the other cannot function,” said Kahawaty.

Social media, according to Tutunji, plays a significant role in raising funds which has become increasingly difficult.

Social media is a significant tool, according to Tutunji, particularly as it has become harder to raise funds.

“We are facing what is known in the NGO world as donor fatigue. They’ve been giving for 7 years and its going on and there are other crises going on in the world…So we have newsletters that we send…Every year, Jusoor has one big gala dinner…to keep the people remembering that they still need to help these kids. But we are finding it, as time passes more and more, difficult to raise funds”

“We get a lot of our attention from social media. We’re very active because this is how we reach out. Even when I want to hire a teacher…we just put it on Facebook and get have like hundreds of applications,” she said.

For Kahawaty, her role lies in effectively communicating information to followers who are inundated with noise online.

“I was shocked with the amount of people that responded so well…They were watching nothing but my page, waiting for the next story, how to donate, calls to action on how to help.”

“Ninety percent of the people I was speaking to online did not know who the Rohingya refugees were and…didn’t know how to help. So, if it wasn’t for me educating them on this situation… you would assume that they don’t care,” said Kahawaty.

“Why is marketing so successful for fashion brands? It’s because you have all these people promoting a handbag, a trend…and people learn about it and then they go and buy it. With activism, If I’m not going to put it in people’s feeds, then they’re not going to know about it.

Encouraging this online activism and developing it into active engagement is one of Jusoor’s beliefs which is manifested through their annual three-week volunteer program.

“We recruit 30 or 40 volunteers to come to our schools and they teach the children…because we want them to become actively involved. I designed this program especially for that,” said Tutunji.

The development of the relationship between contemporary activism and social media is perhaps symptomatic of a growing culture that intends to effect positive change. But this current trend can also allow exploitative and potentially regressive band-wagoning for the sake of likes.

“I would say to models or bloggers or influencers… is to educate yourself…It’s important for people know that you are committed to a certain cause…activism is a state of mind, it’s not a profession, you do not get paid for this. You do this because you care and you want to,” said Kahawaty.

BREAKING THE CYCLE OF DISADVANTAGE

Over the last decade the New South Wales prison population has surged by 35%, prisoners on remand have doubled. Is the increase in the number of people with disabilities in prisons a sign the current policies for dealing with disadvantage are wrong? STEPHEN HILL reports.   The lack of adequate disability support services is driving […]

Is Australia prepared for the demand of apartments?

Over the past 25 years, there has been a 78% increase in apartment living, according to the 2016 Census of population and housing.   This shift has become a choice for many families due to affordability, convenience and lifestyle.   But as this cultural shift occurs, there is a stronger demand for apartments in […]

By Emily Van Arendonk and Natalie Akle | March 2018 | Intended for the UNSW Publication/Frankie Magazine Sitting with a smile Naomi McCarthy is the picture of an artist, blonde curls swirling brazenly around her delicate face with no hint of tire after her busy seven-hour Saturday. The mother-of-two takes her time out of her […]