When the whistle blows

When Ellia Green shattered her knee in Japan last year, she wasn’t sure if she would ever play again. Now, the successful Rugby Seven’s star and former Olympic gold medallist has been selected to compete in the Commonwealth Games. We sat down with her to talk about life, injury, and her passion for the game. 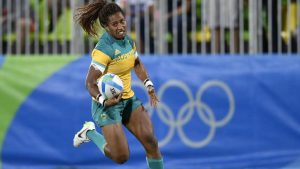 Sitting in Ellia Green’s beach-side Bronte apartment, there is no mistaking that she is a passionate and successful athlete. She sports a yellow jersey embroidered with all manner of advertisement and sits on a small couch whilst a tiny dog lovingly jumps on her knees. This as it were, you would never think that just few months ago she had suffered a near-career-ending knee injury.

Green began her career as a track and field athlete and started playing Rugby Seven’s around the time that she turned nineteen. At this time, she didn’t even really know the rules.

“My cousin asked me to go to a Rugby Seven’s trial when I was nineteen and basically long story short from there it was basically the luck of being in the right place at the right time,” she said.

“The transition from track to field to rugby seven was a very hard decision that I had to make, and it was one that I was unsure of. The only reason I did pursue it was because of my mum.”

From there, it was only a matter of months before Green was playing for Australia in Houston on the world series.

“Playing for Australia for the first time ever in the green and gold was a very special experience, I didn’t think I deserved to be there because I didn’t know the rules very well and I didn’t think that I had the experience for that trip,” Green said.

The ensuing career bought her a gold medal at the 2016 Rio De Janeiro Olympics, success on the World Series, and entrance into the upcoming Commonwealth Games.

It was in Kitakyushu, Japan, that she ruptured her ACL. The nine months thereafter proved a trying time for the young athlete who only a few months earlier had undergone a major shoulder reconstruction following the Rio Olympics.

“When I tore my ACL, I didn’t know straight away. I did hear my leg snap but I thought I might have broken my leg,” she said.

The accident came as a shock to Green’s career because it put her into rehabilitation for the following nine months. This was an experience that Green struggled with as it resulted in a number of both physical, and mental challenges.

“Months down the track, when it got to the three or four-month mark, my head really started to go down-hill. You can only be on that high for so long until it starts to wear off and you think wow I am actually in this for quite a long time.”

“Commonwealth Games is fast approaching. It is only three weeks away until our team enters the village,” she said.

At the time of our interview with Green, the Australian team for the Commonwealth Games had not been announced yet, thus Green was quite cagey about her potential selection for the team. Despite this, she shed light on her ambition to play.

A few days later, Ellia Green was selected to play at the Commonwealth Games. We reached out to her for a comment.

“It’s huge and it’s a privilege to be a part of it. There are not many opportunities were we get to play rugby on a world stage and on home soil,” she said.

“We won’t be taking any team lightly. Yes, Rio was a very exciting time, but that was two years ago now, and teams have got a lot better since then.

“I know New Zealand will be chasing us down and will be wanting to take out the Commonwealth Games. Also, Canada and Fiji who are always competitive.”

Selection for the Commonwealth Games comes as a huge achievement for a sports star who has battled health issues since she was nineteen years old, and her mother’s cancer diagnosis a little under three years ago.

“I would say one of the two biggest challenges throughout my career has been dealing with my mum’s illness. She has been battling cancer for the last two and a half years now, and that has been extremely challenging,” Green said.

Green often returns home to be with her mother for treatment sessions, which poses difficult when it comes to training and preparation for upcoming matches.

Considering the health and family issues Green struggles with, being a woman in a largely male-dominated sport is also a significant challenge. She has a very positive outlook on this, however.

“Females in sport are excelling so much at the moment, and it is amazing. Not just in Australia, but all around the world,” she said.

“We are seeing women playing sevens in Mexico, in Israel, in India and this is really amazing to see. So many countries are now playing this sport and it is just going to grow from there.”

Women’s sport has been growing over the past couple of years, with women being featured at major world sporting events, such as the Olympics and upcoming Commonwealth Games.

Rugby Seven’s featured at the Rio De Janeiro Olympics in 2016 and was heralded as a significantly important moment for the sport.

Green said that having Rugby Seven’s featured so heavily in the Olympics was a real turning point for the sport, which is not as well known as other forms of Rugby.

“It gives us an opportunity for it to get streamed on free-to-air television and that makes a huge difference for our families here in Australia and around the world,” Green said.

Whilst Green expects to continue her career in Rugby Seven’s for a number of years to come, her long-term goal is to work as a peacekeeper for the United Nation’s when she retires from Rugby Seven’s.

This article was jointly written by Evan Williams and Tanisha Stanton.

For more on Ellia Green and her experiences as an Australian Rugby Seven’s athlete, check out a snippet of our conversation with her, linked below.

No Dogs, Cats or Wheelchairs

By Jasmin Abbott   Your daughter is graduating today after 5 long years of study. You’ve watched her grow and this is the most important moment of her life so far. The graduation is at 2 pm and you’re already running late because getting ready isn’t exactly easy. You get to the train station […]