Sitting with a smile Naomi McCarthy is the picture of an artist, blonde curls swirling brazenly around her delicate face with no hint of tire after her busy seven-hour Saturday. The mother-of-two takes her time out of her weekend to teach kids of all ages whilst working as the managing director of education at the Penrith Regional Galleries during the week. McCarthy is the furthest from the idea of a High School dropout. After a tumultuous childhood, McCarthy left school to work full time before marrying and having a family. Not returning to education until she was thirty. Now over twenty years later she is trying to bridge the gap in our education for kids interested in art. 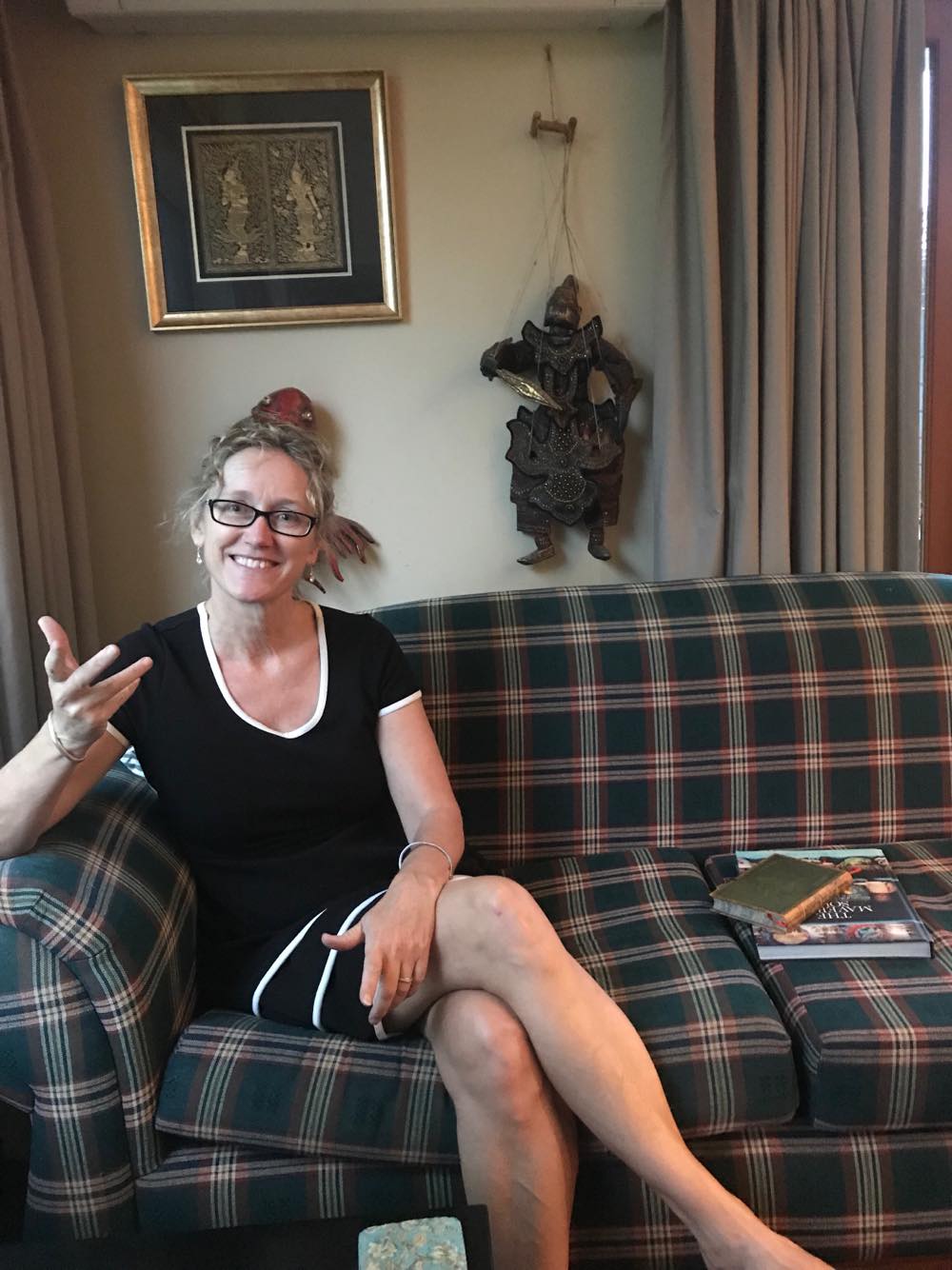 Naomi McCarthy in her Penrith home

“I could always draw as a child,” she says.

“I was always the arty one, always used to hang around in art galleries and was naturally interested…I was actually a high school drop out, I was very bright, always in the top 10% of the state but life was complex so I went off and got a job and got married…then once I had a family I had the privilege really of rethinking what I wanted to do with my life.” 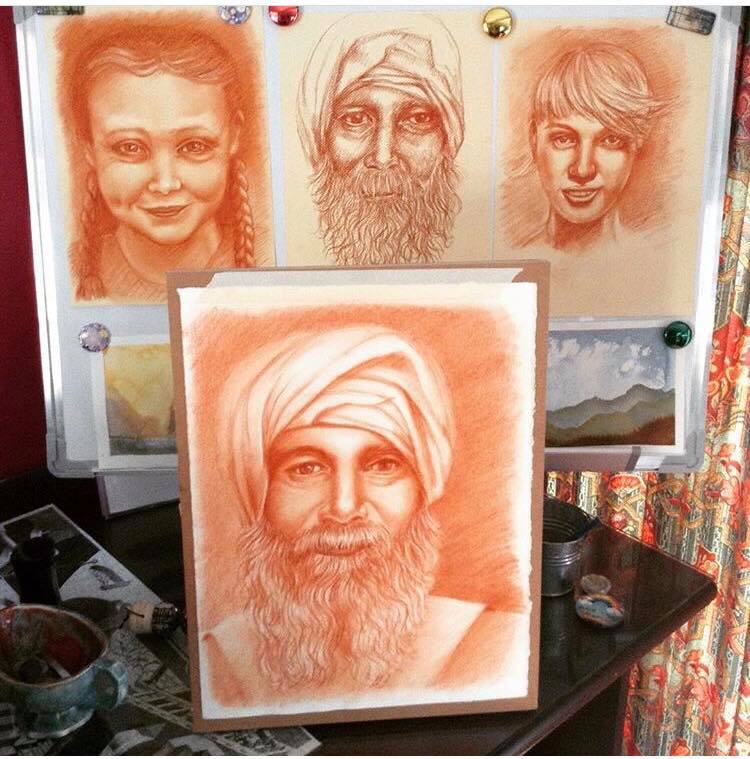 McCarthy grew up on the road in the seventies, travelling with her father’s band around Europe. While stability is deemed to be crucial to a child’s development today, McCarthy’s unstable childhood is not viewed as futile in her eyes, but rather the catalyst to her creative mind. 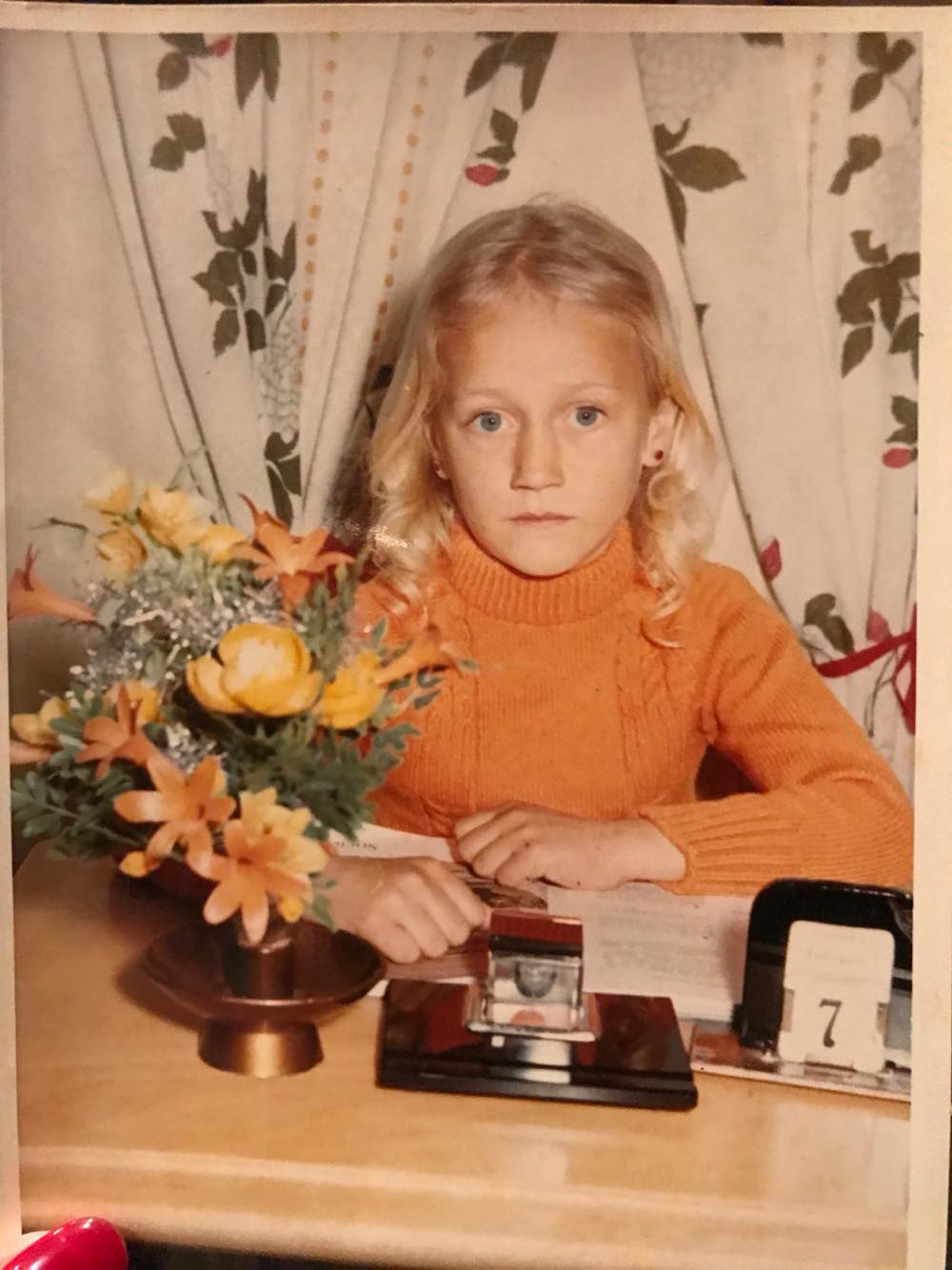 Naomi McCarthy pictured 1972 at her temporary home in Spain.

“I would say both my mum and dad informed my creativity,” said McCarthy .

“I am the daughter of a cross cultural-marriage, [I have a] kind of south-end of London ‘working class girl’ mother and a bohemian musician father, so I have both a work ethic and a creative intellectual curiosity,” the artist dotes on her unique upbringing.

McCarthy lived a life full of culture and foreign influence having lived in five different countries before settling in Australia as a teenager.

“The only ones I actually remember really are France, Spain, one end of England to the other,”McCarthy says.

“I know stories of living in Sicily and I know stories of living in India but I don’t actually remember them. So they’re part of my…kind of the fabric of my memory because they’ve been constructed by my family… It’s probably made me an outsider to some extent, I think it’s an usual position for an artist, for a creative person to have. [To] be not so part of the homogenous group.” 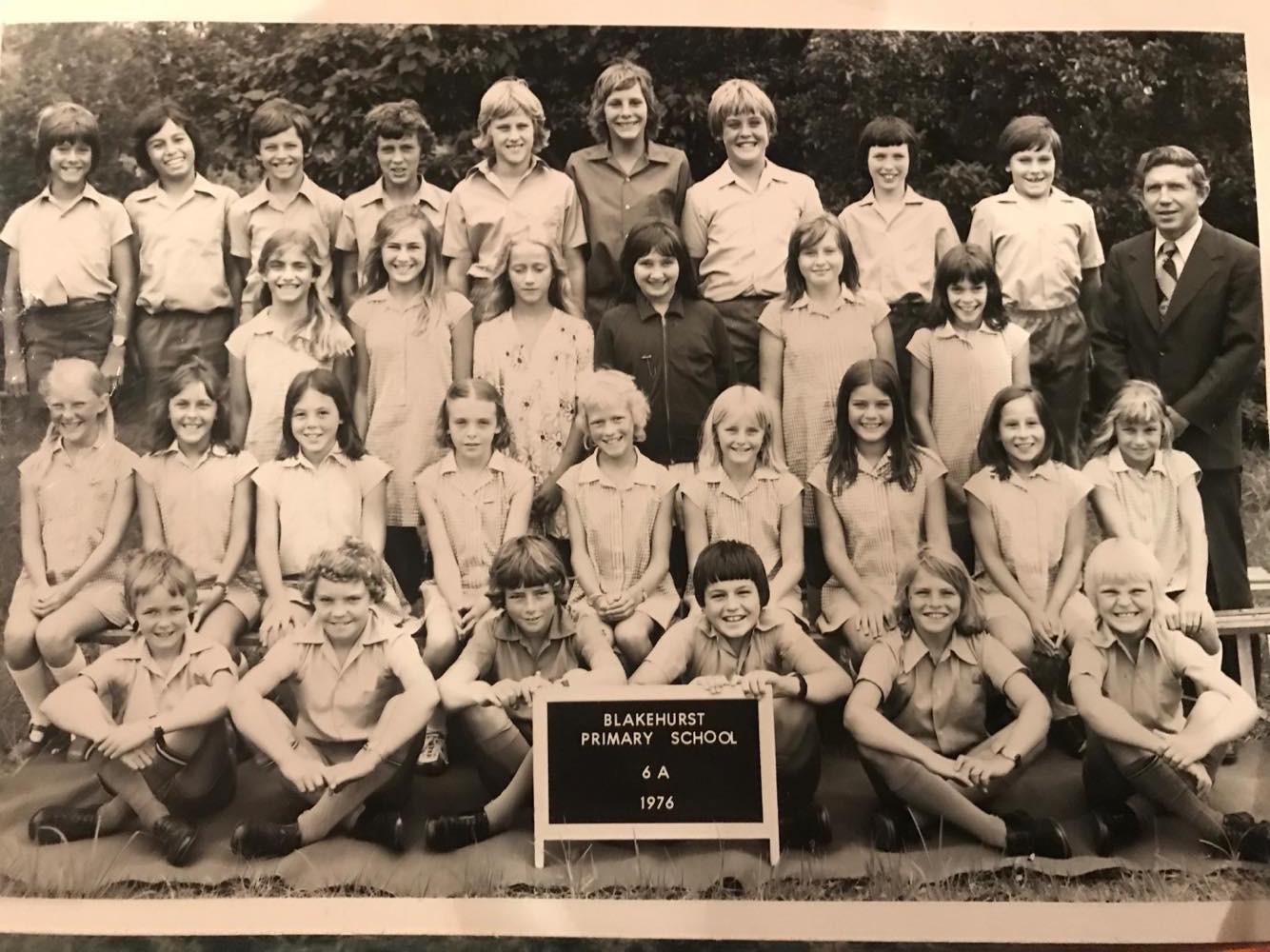 McCarthy says she doesn’t regret dropping out of high school. She believes her time away from education is what coaxed her back to university as a mature aged student,

“When I went back to university I was desperate to be back at university, intellectually hungry for it, as opposed to pushed into it straight after school,” she said.

“I was bitter and twisted before I went back to university, going back as a mature aged student was the perfect path for me, if I had never gone back to arts school, I would’ve regretted being a teenage dropout.”

McCarthy’s situation is a perfect example of an alternate pathway to success, she believes that education is a natural progression and shouldn’t be forced,

“I think there are many different paths to success…we are sending too many kids to uni and I think the idea that uni is the only pathway to success is a very narrow understanding.”

Her passion for art is a formidable defence against what some are calling the death of art appreciation. Having a diploma, post graduate diploma and Masters all surrounding art and the artistic world McCarthy has developed strong beliefs in what art can offer the world and those that live in it.

“There’s an idea that any great civilisation where the arts start to falter, its actually the start of the demise of that civilisation,” She simply says with a matter-of-fact tone.

“If art dies out humanity dies out.” 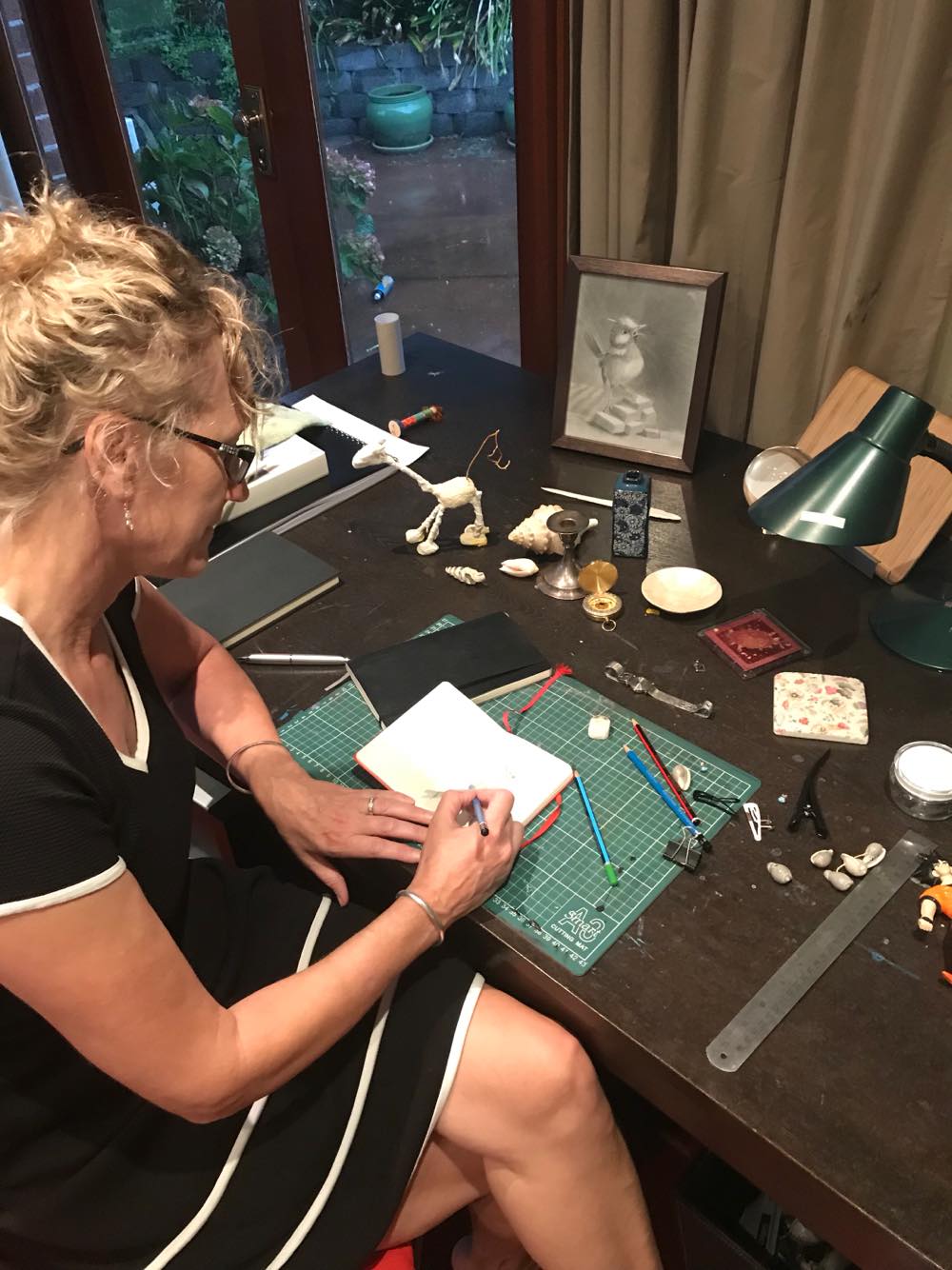 Naomi McCarthy drawing at her desk in her Penrith home.

When looking to the future McCarthy is adamant in the necessity for Arts in society.

“I think that our museums and galleries are bridging some of that [art education] gap,” She says.

“As arts people we have to really make sure that we don’t lose the humanities, in a very economic rationalist world. But I think people want it, people are hungry for poetry, for film, for visual arts and people are hungry for experience that includes elements of surprise and social engagement, so you know that arts surely has to be a part of that.”

Although formed through a disconnected lifestyle, McCarthy’s identity has been shaped by her alternate upbringing as a bohemian child. One could ask, would her passion for art be as robust if she had followed today’s homogenous education path?

We asked her ourselves,

“I think today we are being sold a con. The arts are how we build a civil society, because they are founded on curiosity and curiosity makes you a more moral person,” she said,

“You can’t judge as quickly, you must investigate the reason behind why an art work is what it is. I believe art it’s good for us all!”

As the art landscape in society changes and moves with the times it is apparent that the old practices of teaching art is fading. The idea of mentorship to teach and enable the understanding of art within society is dying as the new generation moves forward into multi-modal disciplines. McCarthy herself is a mentor and finds that the humility of mentorship is able to create and shape the ideas of art and the influence of the art world.

“In my particular world, we value mentorship and I am recognised as an industry mentor,” She says.

“I guess in the current landscape, I think humility is good, it’s good to know you don’t know everything.”

The future for McCarthy as an artist is filled with continued education as she looks to complete her PhD as well as focus on her work and influence in society.

“They’re my ambitions for the year and I have almost ticked off all of those with the opportunity to publish, so my ambition will be to continue… If you want to influence a platform, then a PhD will do that, but ask me at the end of the year and we will see.”

In a world where high school dropouts are considered to lead futile lives, one woman is challenging the stereotype through promoting the need to follow your passion.  The director of education at Penrith Regional Galleries, Naomi McCarthy, speaks to us on her relationship with the education of art. The high school dropout was able to find a developed and mature understanding of the role of art in society as a mature age student. McCarthy challenged societal understandings of the progression of education going back as not only a wife but a mother of two.

“I could always draw as a child. I was always the arty one, always used to hang around in art galleries and was naturally interested. But I didn’t return to a sort of formal relationship to art until I was about 27 and I went back to study. So I had two small children and I went back and I did fine arts certificate at TAFE and really realised that (not?) everyone can learn to draw and realised how much I loved it. also realised how good I was at it or at least had the potential to be good. You know when you do something and you’re like I could get really good at this. So I ended up going back to full time uni at 30.”

We asked her about the necessity of art in society and how it is able to form humanity itself. She drew particular interest in her pessimistic view of a world without art.

“I definitely think art is a positive part of society. There’s an idea that any great civilisation where the arts start to falter, its actually the start of the demise of that civilisation. So when you have a artistic and philosophic life then your civilisation is robust but if you get a militarised civilisation like Rome, then eventually it denotes the fall of that, because it’s the glue and fabric that makes the society stronger.”

She leaves us to question the idealised understanding of education and how it should be pursued. Enabling us to consider the role of both education and art in creating a peaceful and working society.

CONFRONTING VISIONS 1196 words   According to Andres Serrano the depiction of the world is meant to be an uncomfortable sacrament, just don’t call this artist provocateur a photographer, reports STEPHEN HILL     Having depicted everything from morgue bodies, the Klu Klux Klan to a crucifix in urine, veteran visual artist Andre Serrano has […]