By Maggie Hill and Shannon Graddon

In the way that Germany renounced its dark history to become a key figure in international peacemaking, Allgoi born Dr Susanne Schmeidl has carried the memory of her Grandfather, a Nazi Commandant of an occupied city in France, from Mexico to Afghanistan. In redefining her personal identity, Susanne like many other children of the Nazi legacy has actively sought out a life of penance; transforming the ‘guilt’ one experience at a time.

Everybody’s family has issues, but for Dr. Susanne Schmeidl’s family, this takes on a whole other meaning. Her earliest memory of her grandfather was watching in disbelief as he chased after her cousin for misbehaving. This may sound like a typical family, except for one significant difference; her grandfather was carrying a gun as he pursued the young boy.

She may now be a development studies lecturer, conflict researcher and passionate activist; but Schmeidl’s early life began in a different world. Growing up in Germany in the late 1960’s, Susanne was forced to come to terms with what it meant to be a German in a post-Holocaust world, but more than that, she was forced to come to terms with her own Grandfather’s role in the Nazi Army.

“One of my grandfathers was very grumpy” Susanne describes. “I always remember him being stern and that my father had a difficult relationship with my grandfather as well, so we didn’t talk super much about it” she said. But like most contemporary German’s, the heritage of WWII is everlasting in Susanne’s mind. “I’m not even sure I can pin point, I just know that growing up it was always there” she said. 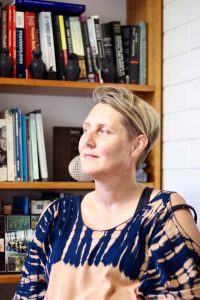 Schmeidl’s family is one of an estimated hundreds of thousands german families who are descendants of Nazi officials, grappling with their own guilt. At its height, the Nazi Party had over 8 million members, there is an identifiable trend of guilt and shame amongst the children and grandchildren of Nazis. Academic Ervin Staub describes this pattern as “the immense struggle of the children of perpetrators to comprehend what happened, to create a tolerable relationship to their dead or still alive perpetrator father, and to build their own identity in the shadow of this heritage.”

Schmeidl describes being raised with a ‘never again’ mentality, as her parents dedicated their lives to others, as Susanne and her two sisters lived in a Senior Citizen home for a portion of their childhood. “He was head of the senior citizen home and she was head of nursing in there. So, we literally lived inside, so their approach then was that in your service you live inside,” she shared. “Like literally our apartment was on the third floor and when you get out the front door they were already right there where the older people lived” she said.

From her humble beginnings as a social worker to her study of non-violent protest alongside the Nicaraguan Peace Brigade in 1988, Susanne has been consistently influenced by family; growing up with a nurse for a mother and minister for father. But like the faint feeling of being followed, her Grandfather’s memory has propelled Susanne across the globe on a journey of change. “I wanted to go overseas and help other people…maybe I wanted to escape Germany, escape that part of history,” she said.

Susanne believes that social justice is a “strong element that has driven my work and that comes back to the fact that the great injustice that Germany has committed and that there is a way that your kind of must balance it out.  That you have to find in a way of giving back I suppose – its ultimate karma that we talk about.” 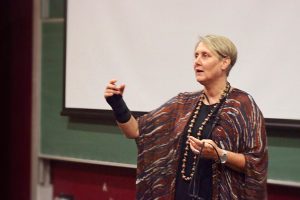 It was living history which she, and perhaps all German’s confront with every new handshake. Though for Susanne the possibility was heightened, completing her PhD under the mentorship of a Jewish refugee scholar. Attending workshops on genocide in New York, only to be questioned on “how I was raised and the holocaust, and what my opinions were” she said.

Though some interactions can be more challenging than others Susanne states: “I was babysitting for this one professor and once his parents were staying over, and at dinner his sleeve slipped- and I saw a tattooed number on it. So, I knew, I was faced not only just with someone who had been in holocaust but had been in a concentration camp.  And that still makes me feel uncomfortable, and I think we just must sit with the discomfort because how can you look at someone in the eye, who your ancestors tried to kill.

Schmeidl’s work has spanned across the world from Mexico to Afghanistan, and has impacted countless lives. But still the question must be asked; is her work an attempt to atone for the sins of her family? “I do believe there was an element of guilt and I think some of us Germans still have an element of guilt to what has happened around that time and you know the responsible Germans.“

Susanne Schmeidl may not be the only person out there directly related to a former Nazi, but she is certainly making her own impact on the world and has been shaped by its legacy.

“I have come to the realisation that we still grow, we learn is that maybe what I do is linked not just to how I was raised; but maybe also when you think I may have had my great grandfather die in World War I and fell in France and was captured but that he comes from that history of … wondering if maybe there is this linear connection, when we do somehow change things and you become a changed agent because of the history of a country but also because of your family.“

Yom Hashoah is the Jewish holiday which remembers the lives and sacrifices of about six million Holocaust victims who died during World War II. It will be celebrated on the 11th of April 2018.

Check out the podcast for this interview here:

After popular show Brooklyn 99 was cancelled and renewed in the space of 31 hours last weekend, we asked Sydneysiders what they felt during the debacle and what other TV show they wished could be brought back from the dead. BY LUBNA SHERIEFF Paromita Haque, 20, Glenfield said: “I had a meltdown. It’s one of […]

“Bit of an eyesore”: Locals have their say on share bikes

On paper, share bikes seem like a great idea. A shared, cheap and clean system to get the people exercising. But what do locals really think about it? Jessica Bono, 22, Carnes Hill I live in the west so I don’t see many, except in the rivers as litter. There’s not many places to bike […]