By: Nicole Chen and Blake Dale

Not many of us can boast about being a part of the Australian Wool Renaissance like sheep shearer Stew Edwards can. But while there is a record high demand in a golden era for wool, there is an even greater demand in the industry for more sheep shearers.

Raised in a family who has been shearing sheep since 1987 and spending most of his time at his farm and home, Catombal Park in Dubbo, NSW, Stew Edwards, 55, has been shearing sheep for as long as he can remember. Edwards’ day kicks off at 7:30 in the morning, surrounded by endless paddocks and fields, with the familiar sound of ‘baaas’ echoing in the distance throughout the day and well after he finishes work at 6pm.

The importance and value of the wool that Edwards’ supplies has become increasingly prominent in a society that is becomingly more conscious, well-informed consumers.

“We believe it’s the most exciting time to be in the industry,” Edwards says when revealing his thoughts on the current Renaissance period that the wool industry is experiencing.

“High-end fashion is really starting to pick up on that.”

Sheep shearing isn’t always associated with the glamour and comfort associated with many other city jobs, but rather, the rough handling of loud, energetic animals in a shed all day. But when asked about what makes living life in the country as a shearer different from life in the city, Edwards had one thing to say: “Look, I don’t wanna tell everyone because everyone will wanna be out in the bush as well.”

On a farm with over 4500 sheep, Edwards and his other shearers may work with sheep but they’re as tough as oxes, shearing up to 100 to 150 sheep a day.

“They’re a pretty hardy bunch, you don’t find too many shearers with soft hands, so to speak,” Edwards says.

“The technology of manufacturing wool has been taking leaps and bounds and wool, the singlets and all sorts of garments are to be worn on the skin and they don’t have a prickle factor … they’re warm and they last for years and years, not like cotton.

“Whether you’re a baker or a candlestick maker, you’ve sometimes gotta put some long days in and days that aren’t as easy as you’d like.” And to be successful in the industry, you have to have what Edwards describes as a ‘”stubbornness to achieve.”

The current price of wool has hit an all-time high of $18 per kilogram and the Australian wool industry is experiencing an era of prosperity, not seen since the 1980s. However, data from the Australian Bureau of Statistics from 2016 found that Australia has just 2482 shearers with a decline of 13 percent since 2011.

Having lived on the farm all his life, Edwards had been shearing animals including sheep and goats since he was in college.

“I grew up on a sheep, cattle type farm and I always enjoyed being around Merino type sheep because I liked the soft, white fibre,” Edwards describes.

“I still always have this thing about enjoying going to other people’s places and going to studs and seeing what they were doing.

“From the onset, I enjoyed being in charge of my own destiny, being our own boss, but I enjoyed trying to do it better every year and producing a fibre that I know is really good for everyone, it’s basically chemical free.”

Shearers are often required to travel far distances to keep up with work. Edwards’s determination and positivity demonstrates that it’s all up to one’s mindset and perspective when pursuing a career as a sheep shearer.

“I believe it is a good opportunity for people to travel because, with the skill of being a shearer, you don’t just have to be in your local area, you can carry your tools in a 5kg bag and off you go,” Edwards says.

“You can go travelling around the world, shearing sheep everywhere and have a paid holiday.

“You can make good money with hard work.”

Being a father of five, with four sons and one daughter, Edwards states that all his children have a connection with the land and the livestock.

“We are the masters, or we try to be, of our destinies, by planning ahead to avoid some of the implications of droughts,” he says.

“My goal is to be passing it onto my boys and their families whenever that is and beyond that…we like to be as close a contact with nature, that we’re looking after it, so it looks after us in the future.” 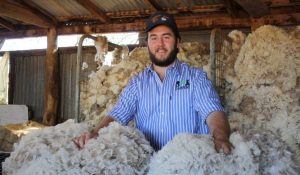 More than just talk about fulfilling his passion for shearing and supporting a booming industry, Edwards talks about the connection shared amongst other shearers that strengthen throughout through time and experience and the friendships that stem from working with the woolly creatures every day.

“We do have not just a work relationship with our shed hands or shearers that come to work for us,” Edwards says.

“We’ve finished the day, I’ll come and grab a six-pack of beer and we’ll sit around for 20 minutes, it’s still five thirty-quarter to six at night then I’ll go, ‘oh good knowing you blokes’, yeah, there is a degree of camaraderie.

“You’ve got to have a big motor to be a shearer. And what I mean is a big heart,” he says. “Most days are hard days and I’ve been there so I can say that fairly.”

For more details on the future of the wool industry in Stew Edwards’ own words, head to our podcast.

Changing lives with pro bono, one step at a time

Written by Emily Cook and Tania Tan John Corker, CEO of the Australian Pro Bono Centre, has a line of career highlights including helping the Aboriginal people attain their first media license. He shared about his contribution to them gaining their first radio station, including CAAMA radio and 8KIN radio, which were broadcasted in Aboriginal […]