His parents grabbed him in the night, a sleepy six-year-old along with his siblings, and fled the war in Vietnam on a rickety boat in search of a new and safer life. The oceans were wild and unforgiving, with Thai pirates ransacking vessels for valuables and murdering those they felt like. Exhausted and with a sick child, his parents eventually landed in Australia, where they were placed in the notorious Villawood Detention Centre. And yet, all Harry Doan remembers was the cake.

In honour of Doctor’s Day, 44-year-old Harry Doan tells his story from Vietnamese refugee to Director of Medical Services at Fairfield Hospital, within the South-Western Sydney Local Health District. 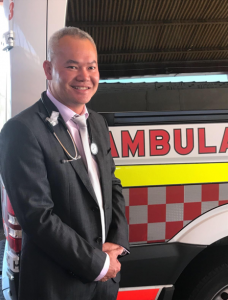 “The most I remember was the lunch,” he said, of his experience in the Villawood Detention Centre.

“There was a time when I went to school and they would provide the kids with a brown bag, there was some sandwiches and apple and the cake, and we would all love the cake.

“So, I remember picking up one of them from the cafeteria and bringing that to school every day.

“What’s surprising is this is, probably, one of the rare memories that I remember.”

His earliest memory on his journey to Australia isn’t a deteriorating boat or rough weather – it’s the beach.

“We actually had no money,” said Doan.

“So what we would do is that, we would get empty cans, put it together on the stream and used that as a float to swim in the beach.”

Whilst the six-year-old in him can’t remember the North Vietnamese army seizing his father, Doan’s story time experiences with his parents fill in the blanks.

“My father was high up in army rank, he was captain of the South, so he was captured by the North Vietnamese.

“Somehow, he escaped at the middle of the night and we found someone who’s got a boat and that’s how we came.

“If they captured him again, it was more likely that they would kill him.”

On their way to Australia, their boat was ambushed by pirates – not the ones with eyepatches and treasure chests, much to six-year-old Harry’s disappointment.

“This is what they do, they see a ship full of refugees, and the pirates come on,” said Doan.

“They took all my mum’s jewelry and all the possessions we had.”

Doan recalled the plights of other refugees who had not been as fortunate.

“There were stories where on other ships, people have been killed or the people are taken away.

“They just took the jewelry and left us alone.

“We were lucky that they left us alive and let us carry on with our journey.” 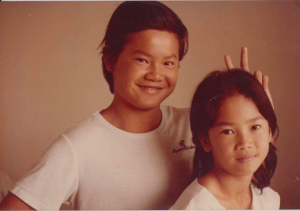 Harry Doan when first arriving to Australia with his younger sister

Not everything was a piece of cake for little Harry who chose medicine to make his parents proud.

“The first few days or weeks were pretty bad because we didn’t speak English and they had to put us in ESL which is English as Second Language classes,” said Doan.

“I remember my father instilled in us a very strict study program. Every night we make sure we sit down at the table, we study, do homework.

“We had to sacrifice a lot because as kids when you see your friends outside playing and then you can’t, it’s really hard.”

Doan also remembered  the efforts of his teachers at Chester Hill Public School.

“I remember on weekends, those teachers would actually take their time and their financials to take us out on outings.”

The Sydney University graduate also reflected on his successful career.

“I know mum is very proud, and dad too. Being an old traditional Vietnamese guy, doesn’t show as much.”

Even though Doan’s dad lacks the paternal display of affection, his mother makes up for it.

When asked who her favourite child is, Dr Harry replied with all the certainty, “me.”

When he’s not spending time in his open-air man cave – the golf course, Dr Doan is bonding with his high school sweetheart wife and three children.

The couple share twins and an eldest girl, 15-year-old Kaitlyn who was chosen to referee at the Pacific School Games in December last year. 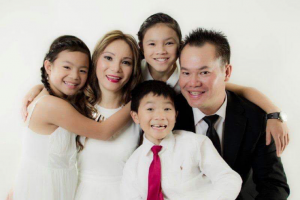 Harry Doan with his wife and children

Doan’s family is heavily community oriented, volunteering in Vietnamese community fundraising efforts towards the hospital. This is one of the most rewarding parts of his job.

Doan also explained his passion for caring for his community and the best part of his role.

“Seeing the patients, treating them with one on one with care, and you see the gratitude from their point of view. ‘Thank you so much’ that’s the best part.

“I will retire here. I’m very happy here and I feel like I’m contributing to the hospital and the community.”

It seems Doan’s colleagues are happy with this decision.

The Community Participation Manager, Robyn El-Khair who works closely with him added, “Harry is a pleasure to work with and he is an inspiration.”

Given the current political climate for immigration, Doan addressed the stereotypes that are asoociated with asylum seekers and refugees.

“Unfortunately, I don’t have any control of that.

“The biggest misconception, I would say is that, all these refugees come and use the tax payer’s money.

“ A lot of them, like me, work hard throughout their life and now are paying back.”

To those chasing their dreams, Doan encourages hope and persistence.

“A refugee when he came to Australia six years old, who did not know one word of English, who had nothing given to him, can achieve what I achieved, it’s basically, anyone can do it if they put in the hard work and the effort.”