Norbu Tenzing: the young man from a famous family, with a mountain of reasons why he won’t be following the path climbed by many before him.

By Grace Robinson-Tagg and Callum O’Donnell

Many of us would say that we have big shoes to fill when it comes to the achievements of our predecessors. Some may say the great-grandson of an infamous Everest mountaineer has even bigger shoes to fill. In Norbu Tenzing’s case, these shoes are hiking boots, and they’ve been trekking up and down Mount Everest for the past 70 years.

However, Norbu is hanging up the family’s Everest hiking boots. Instead, the 19-year-old university student is determined to make his own mark on the world.

Norbu Tenzing’s name and family is synonymous with Mount Everest. His great-grandfather, Tenzing Norgay, made history in 1953 as the first man to reach the Everest peak with Sir Edmund Hilary.

“My great grandfather Tenzing Norgay was the first man to climb Everest and then his son also climbed it and my uncle as well has climbed it. So that’s three generations in a row to climb Mount Everest, my uncles actually climbed it three times,” Norbu said. 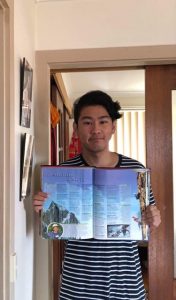 Despite the Tenzing family receiving a place in the 1999 Guinness Book of Records for 3 consecutive generations climbing Mount Everest, Norbu is not intimidated by his lineage of mountaineering men.

When asked if he planned to continue the family legacy, one would not expect the response of Tenzing Norgay’s direct descendant to be “No way! It’s way too high and cold”, but Norbu is throwing pressure and expectation to the wind.

“I haven’t felt like because of past generations that it has been a necessity to do it. I feel like… just take my own path, see where life takes me.”

Norbu Tenzing pictured with the edition of the Guinness Book of World Records that features his Uncle.

Norbu currently studies accounting at Western Sydney University and works as a casual consultant for Telstra. He is pushing to continue the family tradition of greatness in some other venture than by reaching Everest’s summit.

Norbu’s decision to veer away from Everest’s icy and often unforgiving slopes is one his family firmly believes in. His family tree has given him a unique insight into the reality of mountain climbing, he knows better than most how dangerous and difficult the trek actually is.

“I’m not ready for it, and I definitely haven’t trained enough for it… It requires a lot of dedication and I have my own plans for the future,” said Norbu.

Norbu and his family agree that more people should be following suit when it comes to the decision to climb Everest, as the path to the top can be incredibly dangerous and requires serious dedication and training.

“My uncle is fairly involved in the matter, he believes that it’s a risk to the safety of the Sherpas on Mount Everest that more and more foreigners are attempting to scale the mountain… It’s important to leave the mountain to the professionals that are ready and trained,” Norbu said.

Norbu recognises the effect that his great-grandfather has had on the region and the people, both positive and negative.

“My great-grandfather definitely inspired a lot of Sherpa’s to follow in his footsteps … it’s definitely attracted a lot of tourists and it’s really made a name for Nepal,” said Norbu.

Inspiring new generations to follow in Tenzing Norgay’s footsteps has definitely put Nepal on the map, but it has also created new danger for Sherpas that inhabit the area. The more people that want to make the trip, the more Sherpas have to be in charge of guiding them through extremely dangerous areas likethe Khumbu Ice Fall.

Norbu’s lack of desire to reach the Everest summit does not carry over to the act of mountain climbing itself. Norbu is in touch with his roots and the Nepalese mountain environment, trekking over mountains of a smaller scale.

“Me and 5 mates [sic] went to Nepal over New Years, we did a little trek around the Annapurna circuit… Around there, there’s various routes you can take, one of my uncles does a few trekking guides around there, so he took us on that. It was a 9-day trek I believe and we reached, I think it was 2700 meters up high. it was a pretty surreal experience and definitely inspired me to try at least Everest Base Camp” 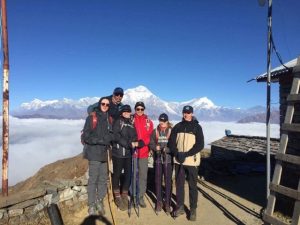 Norbu (red) on the Annapurna circuit

“It was difficult… I definitely didn’t have enough training… a lot of credit goes to the Sherpas and the porters that carry those bags, like it was a struggle for me without carrying any loads but for them they just power through it, it’s remarkable what they can do.” 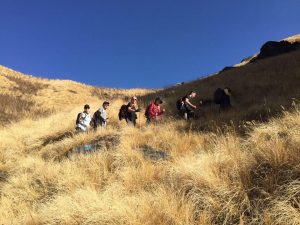 Norbu Tenzing pictured trekking in Nepal (second from the left).

As the great-grandson of Tenzing Norgay, Norbu maintains a strong connection to his roots, and that’s why he has chosen to stay off the fabled snowy peaks. With aspirations to reach Everest Base Camp and an active supporter of Sherpa rights, the 19-year-old student is not dedicating his life to the climb. He understands the true dangers of the mountain, and is ready to place his passion in something else.

“It’s [his family history] a big inspiration for me but it’s not something I personally would like to dedicate my life to. I have other goals to fulfil… My trip to Nepal has inspired me togo to Everest base camp, but that’s as far as I’ll go.”

I am currently in my MDIA2003 Tutorial 🙂

What the Melomys extinction means for Australia’s ecosystem

Australian species are some of the most at risk of climate change extinction by Tanya Pham and Ross Cordato, 18 March 2019 Three winters ago, Australian researchers discovered that the island of Bramble Cay off the coast of Queensland was officially rat free. However, the mosaic-tailed rat did not disappear due to predators or habitat […]

By: Nicole Chen and Claire Keenan Is the possibility of driverless cars really in the foreseeable future? Do people support a future where the roads operate without drivers? We took to the streets of Sydney to ask people about their thoughts on driverless roads.   Andriana Xilaportas, 21, Wetherill Park, Glue Store  “Honestly it’s a […]