Vice-President of the Australian Society of Legal Philosophy, UNSW Scientia Professor Prue Vines, talks about women’s inequality, pulling power levers and changing the world (oh, and how she used taekwondo to save her life).

By Reena Mukherjee and Nazla Sajed 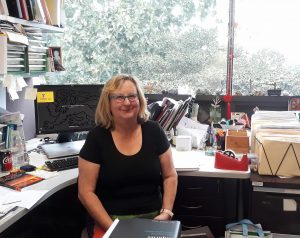 In a tiny office tucked away on the second floor of the UNSW Sydney Law building, a cheerful legal academic shuffles masses of paper and binders around to make room. Above the window, the remnants of a child’s dream-catcher mobile flutter silently.

“See that cartoon up there?” The lawyer says, grinning mischievously at the Punch Magazine drawing of a boardroom on the opposite wall. “It says, ‘That’s an excellent suggestion, Miss Triggs. Perhaps one of the men here would like to make it.’”

Prue Vines began her legal career at UNSW Law in 1990. In the past twenty-eight years, she has written fifteen textbooks, gained Life Member honours with the Australasian Law Teachers Association and founded the International Network of Law and Apology Researchers.

However, not all twenty-eight of those years have been easy.

“I did have a baby with no maternity leave. You see those little things there [she points at the mobile]…those are the leftovers of the mobiles of the baby that came to work at 10 days old with me. That was difficult,” she said.

“I think humans are hard-wired to think that men are more important. “My mother…when she got married, she went to the bottom of the seniority line. That’s how they dealt with it. The generation before her, when you got married you had to resign and you weren’t allowed to work anymore.”

Prue grew up in Papua New Guinea, with a teacher for a mother and a doctor for a father, where her memories, fears and family life influenced much of her present success and outlook on life.

“I have the memory of stealing brown sugar lumps and hiding behind the tank near the passionfruit vine. But I also remember droughts and…being about 5 or 6 when the Bay of Pigs happened…being absolutely terrified,” she said.

“And then again when President Kennedy was assassinated. I was actually quite young, but I was probably more aware than I should’ve been of politics.

“What I did grow up with was a very strong sense that people had to help other people. Why were my parents in Papua New Guinea? They were there because they contributed to making sure that people were educated for independence.

“My father was an epidemiologist, he was interested in preventive health. That’s very different to a doctor who likes to do the remedy – like surgery or whatever. In the same way, in law, I like to do preventive law.

“I was very much brought up to argue about ideas. The dinner table for us was a discussion-fest. It did drive my littler sisters crazy.”

Before becoming a lawyer, Prue was a psychologist working with children at risk, an experience which rerouted her career path.

“I don’t think I even thought about law till I had been a psychologist. I was dealing with children [whose] mother had come into the room and they would go and stand with their back to the wall…it was pretty confronting,” she said.

“After a while I just couldn’t handle it anymore and I decided that maybe the lawyers knew the answers.

“So, I decided to do law and of course it wasn’t very long before I knew that they didn’t have all the answers. But the thing I really like about law is that you can actually change things.”

Fuelled by this desire to help people, Prue has influenced significant change in the international legal landscape. One of these changes involved pioneering the first guideline to Indigenous will-making in 2015, in consultation with Aboriginal women.

“We’d start with all different people from the community and then gradually it would whittle down and the women Elders would be the ones who were left who wanted to talk about these things…they were really incredible women.

“Most of the groups I went to see had a big fight about how a body would be buried. In some communities, that had split them for 30 years.

“When I first started doing succession law, nobody thought there were any issues in Indigenous law to even look at.

“I can remember a senior academic saying to me that there was nothing to write about! Fortunately, I didn’t accept what he said. Because as Sir Gerard Brennan said to me once, ‘There are so many things to learn.’ And he’s right.”

As a female academic who began her career when only 14% of professors at UNSW were women, Prue continues to advocate for women’s rights. 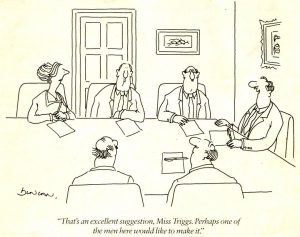 Prue Vines spoke to us about how much further we have to fight for equality:

“I did taekwondo for years and actually used it to save myself from someone who tried to kill me once.

“I was just on a beach and a man came out of nowhere, he was naked and I think he was on ice…I tried to talk him down for a while but he just wasn’t going to be talked down. He tried to drag me down into the sea.

“I think he was probably pretty surprised at the response! I kicked him. I knew these particular moves and I fought him off. And then I went…boom…out of this beach up to the top of the cliff thinking, ‘I did that! I did that!’.

“Since then I haven’t been scared of anyone. It just showed me that I could deal with them.

“In most situations where a man attacks a woman, a woman is too concerned about the man’s feelings to fight back. They want to be polite. So, you have to get over that. You must think, ‘I must protect myself.”

Prue’s belief in helping others is her daily motivation. She continues to “read, write and think about ideas”, using education as a tool for preventing injustice.

She is currently working on the role of apology in contract law.

“The thing I really like about law is that you can be idealistic without being pathetic about it. As a lawyer you learn to pull the levers of power. So, you can actually think about changing the world, even if it’s only one little bit at a time.”

By Maria Ekarista & Annabelle Cheung Reading fanfictions about your favourite gay ships, following queer-friendly accounts on Tumblr…  To certain young queers, this is the largest extent to which they can embrace their identity – through an online persona.  Although Australia is more progressive than much of the world in recognising LGBTQI+ rights, that does […]

By Brooke Burns Sydney’s troubled music scene was dealt a hard hit when another iconic venue, The Basement, announced it would be closing its curtains one final time after losing its battle against the lockout laws. Since the enforcement of the 2014 lockout laws, Sydney’s live music culture has been met with a series of […]