It has been 18 years since Terry O’Connell left the police force, yet his fight for real justice continues.

Hidden away in the mountain ranges of New South Wales is Terry O’Connell’s family home. It’s peaceful and warm, much like Terry himself.

A Churchill Fellow and recipient of an Order of Australia, Terry is a pioneer of restorative justice, and a police veteran of almost 30 years.

As we chat over date scones and tea, Terry tells the story of how he fought to revolutionise the New South Wales justice system.

“The story behind the story was one of intense struggle, one of being undermined, and has been repeated a thousand times in all my work.”

One of ten children, Terry left school before the age of 14 and became an apprentice railway technician, working in Eveleigh, Chullora and eventually Lawson.

“During that 5 years working in the west I learnt a lot about life. I was a young guy who was pretty sporting and never drank. I worked with guys who worked extremely hard during the day then got on the grog at night and ended up bluing.”

“It always struck me and I always thought ‘what was that all about?’ and I guess it raised this issue about really understanding the human condition” recalls Terry.

After his stint working on the railway, Terry entered the police as a bright eyed young cop, hoping to make a difference. Quickly, he noticed cultural issues in the police force, and in the manner of policing itself.

“I experienced policing where many of my colleagues saw policing not as a profession but more or less as a trade in that very little thought was given to it. They were disenchanted with the criminal justice system because their world view was the way you change behaviour was to punish people, even though if what you’re doing isn’t working simply doing more of it isn’t going to work either.”

“So as a young cop I began to think about what policing was really about and came to the conclusion that it was about dealing with people in crisis, dealing with conflict and the capacity to communicate and so I always thought that interacting in a really respectful way was really important.”

A turning point, as Terry recalls, was in June of 1973. Called to respond to a fight at a dancehall, Terry was attempting to calm the situation when he was assaulted by a young man.

“I took this young fellow to his home, got his mother to bring him to the station the next day and we sat and chat. I knew this boy had been charged twice with assault and that he was on a community bond which meant that any further infraction would’ve meant that he would spend a minimum of 12 months in a juvenile detention centre. What I got to discover from this conversation…was that 14 months earlier his dad had been killed. So, it was very clear to me here’s a kid pretty traumatised by loss of his dad, with no capacity to deal with the raft of painful emotions and overwhelming sense of shame and powerlessness. His way of managing was to hit out.”

“What was interesting was that 15 years after the incident, he was 29 in the same hall. I get a tug on my shirt and he said, ‘do you remember me?’ and I said ‘of cause I do. You belted me in the eye’.”

“He went on to say that he was happily married, had 2 kids and that life was good. His relationship with mum was great – and I guess between 1973 and 15 years later I get involved in a whole lot of policing in which I simply drew on that practice template as a way of policing.”

This one man’s revolutionary approach policing was not unchallenged, and affecting change in an institution such has the justice system would be no easy task.

In the mid 1980s, as a response to his concerns about police culture, Terry became the local union representative for the Wagga Wagga area and eventually obtained a social welfare degree from Charles Sturt University.

“I saw how badly the police service had failed on two levels, firstly there was a sort of a punitive approach to issues, and the second thing was that where there was a genuine injury, psychological or otherwise, [the service] had no clue how to support officers.”

Despite his success as a mentor and a mediator for victims, offenders and officers themselves, Terry found great difficulty in initiating a wider cultural change.

“The great difficulty was that naively I thought that in making a difference, everyone would be excited. I soon learnt that I was messing with an industry. We had vacancy rates in the juvenile detention centre, it lost half its work load. Probation, parole, and the industry including the police became very concerned. They felt that there was a fundamental conflict of interest in this, that policed involved in this process weren’t deemed to be neutral. So, part of the learning curve for me was that anything that involved change required very careful consideration and that making a difference was a guarantee of nothing.”

Eventually, Terry moved from Wagga Wagga to work in human resources at the request of the then assistant commissioner, Christine Nixon.

“I was asked if I would come in and look at the possibility of implementing this restorative stuff in terms of policing and in terms of workplace personal grievances, complaints, discipline. Word was out within 12 months by senior police to stay away from that lunatic O’Connell – ‘He’s a pop psychologist, he has no clue what he’s on about.’”

Not long after this, Terry headed a team tasked with the responsibility of investigating the possibility of police reform. The team developed a system of policing which focused on communication and relationships, not supplementary to punitive action, but as a means through which to mend community and personal relationships that are broken through crime.

The taskforce focused specifically on the policing of Shoalhaven and Waratah.

“Within 2 years, they were transformed. Criminal indices were down in every area. Morale was through roof, no one was on sick leave, complaints against police were down. Interestingly, surrounding local area commands had an increase in all these things.”

The results of this investigation were so impressive that when the police force was questioned about the efficacy of their reform, Terry and his team’s work was used as “exemplars of police reform.”

For a brief moment, Terry had the support of his professional leaders and even secured $50,000 of funding for further research to support the rethinking of police as governance and police as policing.

But just as his reform in the force began to gain traction, the rug was pulled out from underneath him. In 2000, his team was dismantled and he was forced out of the police force on the basis of medical discharge.

12 months later, one of the members of Terry’s team blew the whistle on the inadequacy of police reform and an inquiry into policy integrity was called.

“It was a whitewash…I refused to attend because it wasn’t an open inquiry.”

“They had 20 detectives working on my three former, staff trawling for evidence on inappropriate conduct. They couldn’t find anything. The final report came out, 18 months after I’d left police. The day after [the whistle blower] took his own life – jumped in front of a train.”

“That’s the sort of stuff that I was dealing.”

Now, almost two decades on, Terry reflects on his decades of policing with the same unwavering courage he brought to his policing.

“I always had a very clear lens, I was also savvy, I was also politically advantaged because I was Deputy President of the Police Union. There was a reluctant respect shown. But having said that, the old saying what doesn’t kill you makes you stronger is absolutely true. I wouldn’t have changed anything because it was critical part of the learning. There are layers of stories around this stuff which would blow you away and that’s going to edge for people who are vulnerable.” 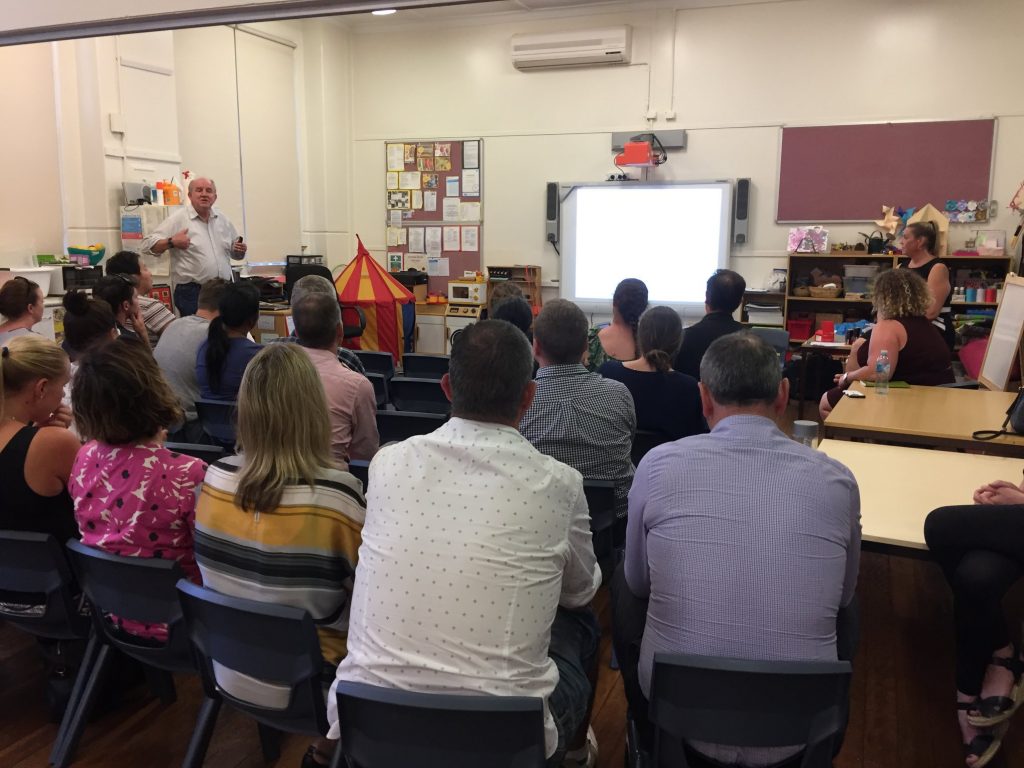 By Abby Butler    Hold your keys between your fingers, fake a phone call, avoid wearing heels – all are tips and tricks that young women have used to feel safe when walking alone at night. But for many, putting in a pair of earphones and tuning into a podcast detailing the graphic and gruesome […]

As the world goes into lockdown, we’re all urging each other to “stay home!” But for many of us, those two words incite unimaginable fear and dread. As domestic violence cases are expected to surge in this time, how will an already overstretched and underfunded domestic violence service industry handle it? By Jill Tengco Forced […]

After popular show Brooklyn 99 was cancelled and renewed in the space of 31 hours last weekend, we asked Sydneysiders what they felt during the debacle and what other TV show they wished could be brought back from the dead. BY LUBNA SHERIEFF Paromita Haque, 20, Glenfield said: “I had a meltdown. It’s one of […]