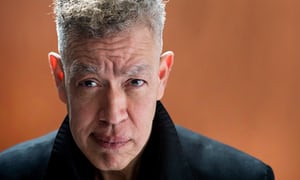 Having depicted everything from morgue bodies to the crucifixion of Jesus Christ in urine, veteran visual artist Andres Serrano has turned his attention to portraying the discomforting reality of the many people living without shelter.

In Sydney on a six-day trip, Serrano discussed his work at a UNSW Centre for Ideas“Art of the Homeless” forum with some of his images displayed at UNSW Galleries.

Returning to Australia, the photographer remembers the tumultuous time when one work in his Immersions series Piss Christ would, in the words of the artist, “start the culture wars in 1989.”

“This would result in my work being denounced in Congress and in the US Senate,” said Serrano.

In a climate where modern art exhibitors were placed under the strain of several high-profile obscenity trials, Piss Christ became emblematic of artistic decadence in a culture war between conservative Christians and modern artists. 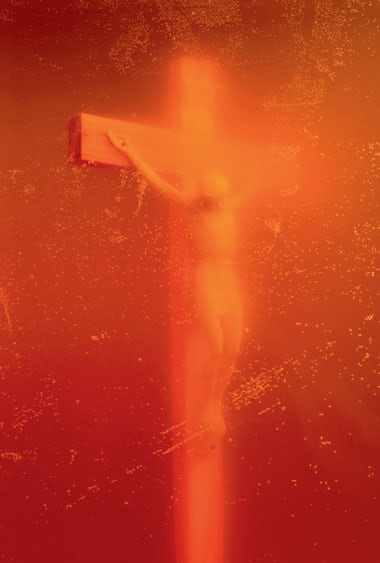 The ensuing controversy would result in reproductions of Serrano’s work being destroyed in France, as well as Sweden and in Australia nine years later when displayed at the National Gallery of Victoria.

“Piss Christ was very controversial because the Archbishop of Melbourne George Pell denounced me and tried to get an injunction against Piss Christ. He didn’t succeed, but because of all the commotion stirred up in people, Piss Christ was attacked and after two days of exhibition the show was cancelled,” said Serrano.

Serrano in his four-decades of creative work is known for not shying away from difficult subject matter.

Sydney University Lecturer Dr Donna West-Brett said his ability to use the photographic medium “as a beautifully cruel lens that focuses on the often-abject qualities of the human condition” is part of the reason behind his international appeal.

This has seen the part-Honduran, part-Cuban second-generation American take on the challenging task of photographing members of the Klu Klux Klan, drawn by the compulsion to photograph “someone with a mask on, the antithesis of a portrait.”

“Where a portrait usually identifies someone facially, their character, their soul, they show something about that person. Whereas a mask shows nothing,” he said 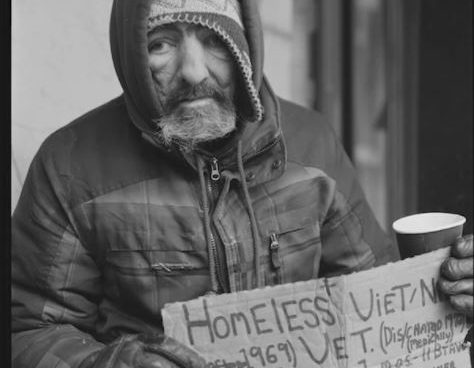 “I think if I was a white man I wouldn’t have done it, as it wouldn’t be interesting,” he said

“It’s funny because when I first started to do that work, my assistant said to me, these almost look like recruitment posters for the clan. And I thought that bothered me for a moment, but then I thought you know people should see what they want to see there, it’s not up to me to tell them how to view these pictures,” he said.

Serrano has also focused on challenging audiences in different ways, suggesting his photographs of the homeless will provide a new creative avenue following the media storm of Piss Christ.

The first series of these pictures, Nomads, created in the early 90swould see Serrano create studio portraits for a group of individuals that had largely eluded the public gaze.

Eventually twenty years later, having witnessed an increased number of homeless people in various cities, Serrano would focus again on this project, embarking on three new series of works that aim to make visible the uncomfortable reality of the street.

These would include the Sign of the Time; a project in which the visual artist would purchase and display the signs deployed by the homeless that offer a brief narrative of their life; followed by the Residents of New York Series, whose success triggered the follow-up the Denizens of Brussels.

In the Residents project, Serrano photographed his subjects without a studio backstop, producing works that could be blown up in size as posters and placed on billboards for subway commuters to observe.

“It is funny because you’d walk down those corridors on your way to your train and there they were my pictures of the homeless and then you would go outside the station and you would see the actually homeless right there,” said Serrano.

This has led to the organisation that funded the program More Art commissioning further images of the homeless to further increase public awareness of their plight.

According to Serrano he preferred the name “residents” instead of “homeless” “because these people are residents of the city even if they live on the streets.

“You know, residents, denizens, poor people, I could have done this in Paris, New Orleans, Sydney,” said Serrano.

In these projects, Serrano said he was inspired by the work of Edwin Curtis who depicted the Native Americans at the turn of the 20thcentury and Dorothea Lange who chronicled the individual dignity of those most affected by the Great Depression.

Serrano observed in the European locations “street begging is more theatrical, in Paris and Brussels you see them on their knees praying, you see them with babies.”

“I’m not a crusader, so I do it as an artist I just want to identify with these people, recognise them and create works of art around them,” he said.

“Whatever you think of the homeless, I try to imagine when I was young and sold drugs on the street. I was a drug addict in my early twenties, but I was never homeless. And I was always doing something, and to do nothing that is a hard life,” he said.

Having become enamoured by art following a school trip to the Metropolitan Museum of Art, Serrano’s career growth as an internationally recognised conceptual artist is considered a remarkable journey for any boy from the Bronx fascinated by the religious iconography of Renaissance paintings.

“I studied painting and sculpture at the Brooklyn Museum School when I was 17 and after two years of school I realised I couldn’t really paint or sculpt the way I wanted to, but I lived with a girl who had a camera.”

“So, I started using her camera, always seeing myself as an artist rather than a photographer,” he said.

A recent fascination in street life has seen the visual
artist shift his attention to the Asian continent with a “Made in China” series giving him a vehicle to document working-class people in Beijing.

“I dress them in this dress that looks ceremonial, it looks regal, but they are really wearing traditional robes for men and women. And it’s not really a costume, because people buy these outfits and keep them and they cost a lot of money.”

“I’m thinking about doing something else this year, but I’ve got to tell you, I get tired of taking pictures sometimes, and I’ll tell you why, because a lot of people inside and outside the art-world, but particularly inside the art world call me a photographer, and I hate that.

“So sometimes it makes me want to stop taking pictures and dosomething else.”

The Death of the Crusades

By Josh Needs The name Billy Graham was once synonymous with evangelical Christianity, but with the rise in anti-church sentiment and non-religious households his legacy may forever remain in the realms of nursing homes. Billy Graham, the leader of the crusades which claimed stadium records in Sydney and brought evangelism into the mainstream, and people’s […]