60 years ago, the Bengali Language Movement reached a bloody end with the independence of a new nation, Bangladesh – along with the recognition of its ancient language, Bangla. But in this globalized era, the Bangla language is increasingly becoming forgotten by its own people. One Sydney school is doing its best to keep the language from the brink of extinction. 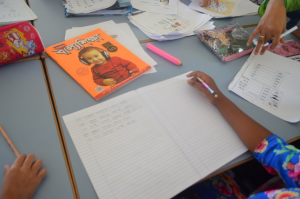 On a sleepy Sunday morning in the suburbs of Western Sydney, a local public school comes alive with chants of children learning Bangla.

It’s a stark contrast to the busy streets of Dhaka, Bangladesh, where concrete walls are plastered with faded posters screaming “English Medium Enrolment” and “Do you want to study in Australia?”

The one thing both Australia and Bangladesh seem to have in common is a penchant for the English language.

In their 2013 paper, “Cultural Imperialism in English Medium Schools: A Critical Insight”, Dr. Muhammed Haque & Tahmina Akter maintain that the popularity of English Medium Schools (EMS) in Bangladesh promotes “cultural imperialism”, which must be countered, “because the history of the Bangla language and Bangladeshi cult
ural heritage are at stake, which are often synonymously correlated.”

ing to Haque and Akter, the overwhelming presence of English and its effect must “be made aware (of), and gradually resisted or else there will be severe repercussions in the long run.”

No one is aware of this precarious situation more than Rokeya Ahmad, Principal of Campbelltown Bangla School in Western Sydney.

When the school first started in early 2000s, there was just one cramped class of 15 students. Since then, it has run every Sunday for 15 years, teaching children the Bangla language for two hours, and then exploring song, dance and other cultural outlets for another hour.

Rokeya Ahmad teaching a new generation of children the dying language of Bangla.

“Bangla School, in its initial years, had limited resources and funds. We didn’t have many teachers and those who could come weren’t always regular. There are a lot of responsibilities outside of school hours, which most people could not commit to. And we didn’t have the numbers; there was a severe lack of interested parents willing to enrol their children.” says Ahmad.

But it seems that Bangla’s profile is starting to rise in general Australian society. Today, Campbelltown Bangla School provides a formal syllabus, multiple classes and extracurricular activities, in efforts to revive the Bangla language in the second-generation Bengali-Australian children of Sydney.

Ahmad considers it “a huge success” that her school has held on to its message for over a decade now – a message echoed in wider Australia.

International Mother Language Day, or “Ekushey (21st) February”, as it is known to Bengali people worldwide, commemorates the events of 1952 – when Bangladesh was still known as East Pakistan – where four students from the University of Dhaka were shot and killed during a peaceful protest against the Pakistani Government’s enforcement of Urdu as the sole national language.

In Bangladesh, International Mother Language Day is held in high regard, with Dhaka University honouring the martyrs by building the Shaheed Minar – one of the Bangladesh’s most recognizable buildings today.

2018 marks a turning point for local Bengali communities – they can now officially commemorate this culturally important occasion in their new home, Australia.

“The fact that Bangla has been acknowledged in Parliament and around Australia is a huge achievement. But this is just a start for us,” says Rumana Siddique, a teacher at Campbelltown Bangla School.

“We need to think about what we can do, and what our responsibilities entail. The Australian government has shown (the school) a lot of support, but now we must think of…how much further we can go now because of it.”

Although it only receives $3000-4000 yearly from the Australian Government, Campbelltown Bangla School has bloomed in its 15 years of operation.

“Although we have limited resources, we have achieved a great deal- including a structured syllabus. Starting from Kindergarten, we assess how much history, culture and language each year level should be capable of understanding to their fullest ability… And this structure will become a precedent for future generations to make an even more structured, formalised form of teaching”

Campbelltown Bangla School bases their syllabus on the Bangla Medium Schools in Bangladesh, “but of a higher quality,” adds Ahmad.

Experts at a recent panel discussion held in Bangladesh, titled ‘Higher Education, Research and Intellectual Pursuits in Mother Tongue”, urged lawmakers and academics to introduce initiatives to elevate the status of Bangla language schools, thus countering the idea that Bangla isn’t as sophisticated a language as English. Ahmad agrees with this sentiment, saying that Bangla Medium Schools (BMS) are notoriously underfunded and thus cannot compete with the appeal of EMS.

“…the standard of education (in BMS) has severely decreased. It is also difficult to get into. You need to take an entrance exam, then provide a generous donation. So, the reward you are getting for investing in this kind of education is limited. So, parents think: for a significantly less amount, I can send my children to an EMS, where they’ll receive a better education and skillfully learn English.”

“…if I were to say it straight, it’s because the government monitors these things and have decided that Bangladesh’s history and culture is not as significant,” says Islam,

“If we were making our Bangla syllabus as strong as our English one – then there wouldn’t be a problem of our language fading but the fact of the matter is it’s not happening in Bangladesh.”

But Ahmad and her teachers are determined to fill the gap in Bengali Language education.

“We bring in textbooks of Bangla literature, the alphabet, and other such materials. We also emphasize greatly on history, specifically days of great cultural significance such as the Genocide of 1971 and Bangla Language Movement of 1952,” says Ahmad,

“We also encourage a great deal of storytelling; this improves both oral and listening skills. All this is done to ensure their vocabulary skills progress greatly, as well as their ability to recognise the influence and impact of Bengali culture and history”

“We have such a rich culture, so many folklores originated within Bangla-  songs, dance- and if we don’t nurture this, we won’t learn any of this and it will become very difficult to communicate with our family and the next generation,” says Millie Islam, another teacher at the Bangla School.

“There is also a sense of belonging; we need to be able to be a part of this community, which will make everyone happy.”

It has indeed made the children very happy. Alveera, a year 5 student at the school, excitedly recounts her progress, “…it’s really really fun to sing, and then- it’s like my voice gets a lot better and in future, it’ll hopefully improve a lot”

Year 7 student Alisha says that performing for Bangla School has helped her to get over her stage fright and has enhanced her appreciation of her country.

“I actually never knew that our culture was this rich and this colourful and bright,” she said.

Although the school has progressively improved since its early days, there is still a lot to be done.

“There’s roughly a population of 10,000 Bengalis in Sydney but when you compare that ratio to the number of children enrolled…it’s really frustrating to see the lack of dedication,” laments Ahmad.

“Our attitude is a huge obstacle…(Bengalis) don’t place Bangla in high importance.”

“Learning one’s mother language is extremely important because it is linked to history,” she says, “If a child doesn’t understand their own history or origins, then there will come a point where they can no longer relate to their parents or grandparents.” She advocates for kids and parents alike to continue to practice Bangla in whatever way possible, whether it be at Bangla School or even at home.

“One thing that is constantly overlooked is proper pronunciation, vocabulary and grammar. We’re too flexible on this because we automatically assume children born here will not be able to grasp it, but there should be a limit to these flexibilities because once a child doesn’t learn something correctly, they will continue making the same mistake over and over,

“If parents and students alike are aware of these small matters…it is possible to learn Bangla completely fluently, even for those born here, as is the case here [at Bangla School].”

“Bangla is the only language that’s ever been fought for, we went through a violent war to get it recognised,” says Islam.

The students of the school are well aware of the role they play in nurturing the Bangla language in the future, making sure to honour the pain and sacrifice it cost to attain.

One of the sixty students attending Campbelltown Bangla School, practising her Bangla

By Josh Needs I think racism is everywhere and I have one of those goals in my life where I want to live where they haven’t seen people like me. So that’s one of the goals for my life and I’m sure when they see someone like me there will be some sort of rejection […]

by Annabelle Cheung and Maria Ekarista Reading fanfictions about your favourite gay ships, following queer-friendly accounts on Tumblr…  To certain young queers, this is the largest extent to which they can embrace their identity – through an online persona. Although Australia is more progressive than much of the world in recognising LGBTQI+ rights, that does […]