From politically-motivated Instagram snaps and TED Talks to working with NGOs and visiting refugee camps, online blogger culture has tapped into activism.

A week after walking the red carpet with Cate Blanchett at the Dubai Film Festival, Lebanese-Australian model, Jessica Kahawaty, was sweating in Cox’s Bazar, Bangladesh. On an official UNHCR emergency mission visiting some of the 625,000 Rohingya refugees, Kahawaty felt inundated. 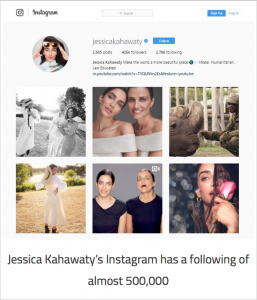 Amidst the heat, the cries of babies yearning for their mothers, the thousands of homeless, helpless and hungry lying around the camp, Kahawaty wondered how to get her almost 430,000 Instagram followers to understand what she was experiencing.

“It’s about educating yourself and then taking this information and translating it online to people who are littered with so much noise…I did take everyone back to this ultimate goal because without appealing to their emotions there would be no increased awareness and no fundraising,” says Kahawaty.

The former Miss Australia is using the success of her platform cultivated in the fashion industry and her law education to generate greater responsiveness in regards to issues that she is passionate about, such as children’s rights.

“I definitely do see myself as an activist… I think every person is sort of an activist,” she says.

Fuelled by technology, this movement of online activism has been embraced by various industries, linking some of the biggest consumer brands, NGOs and online influencers together in campaigns – and Kahawaty is a quintessential example.

Last year, fashion house Louis Vuitton teamed up with Kahawaty for their ‘Make A Promise’ campaign for UNICEF, which raised $2.5 million. But for Kahawaty, who visited some of the 80,000 Syrian refugees at the Za’taari camp in Jordan to raise awareness, it was about more than just promoting a brand.

“I’ve been a friend of the brand Louis Vuitton for many years…I think this is why I also do have this credibility with my followers; because I’ve never promoted something that wasn’t from the heart,” says Kahawaty.

But Suha Tutunji, Director of Refugee Education program for Jusoor Syria, an NGO that’s been supporting Syrian refugees in Lebanon since 2013, says this is far from reality. 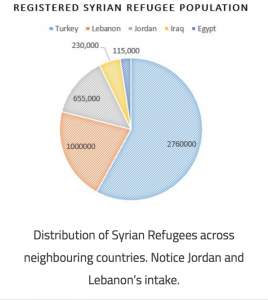 “People like Angelina Jolie (who recently visited a camp in Jordan), I don’t call them activists. Their importance is shedding light because all the media follows them…and they bring back people to the reality of things.”

“We have 335 schools running for the Syrian refugees. Maybe a handful of them are what they show on TV; child-friendly, decorated and the children are tidy.  The majority are not. They’re sending the wrong image,” Tutunji says.

Tutunji, a Lebanese native who has over 25 years of experience in education, is an advocate of education during crises having been educated in a crises context herself. She admits that, as the Syrian war drags on into its eighth year and raising funds becomes more challenging, the presence of high-profile people like Jolie and Kahawaty is sometimes necessary for generating attention.

“We are facing what is known in the NGO world as donor fatigue. People have been giving for 7 years and it’s going on. So we have newsletters that we send…Every year, Jusoor has one big gala dinner to keep the people remembering to help these kids,” she says.

Jusoor receives much of its attention from social media, even using Facebook to advertise for job openings. One of their beliefs is generating this online activism into an active engagement that will benefit refugee children through their three-week volunteer program.

“Every year, we have 30 volunteers from all over the world come and engage with the students. They play sports with them, they do arts and crafts, and science experiments. We also do peace education, music and theatre…because we want them to become actively involved. I designed this program especially for that,” says Tutunji. 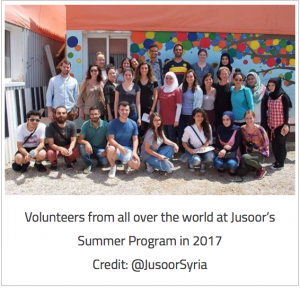 Kahawaty, too, believes in getting involved. As part of UNICEF Australia’s initiative “A Minute of Your Time’, she encouraged fans to donate a minute of their salaries towards ending child violence. In an Instagram video message, she said “Take your yearly salary and divide that into what you’d actually make in a minute…you’d be changing so many lives.”

But what inspires Kahawaty to continue along her philanthropic trajectory?

In Jordan’s dusty desert which houses the Za’taari refugee camp, Kahawaty was pulled aside by 16-year-old Syrian refugee, Omaima. Inside the tiny caravan that she shares with her seven family members, Omaima pulled out a folder from under her bed and showed it to Kahawaty. Written inside were the names, ages and marital statuses of all the girls inside the camp that Omaima had collected in her effort to advocate against child marriage.

“I thought to myself, ‘If this young girl with no resources…is creating waves inside the camp, with all the power, freedom, reach and resources that I have, how could I not take her story and try to make it tenfold?” says Kahawaty.

“They’re not saying, ‘leave it up to us’. When I went to Bangladesh, I saw the aid workers…some of them have been working for 40 days straight…you also have refugees (inside the camp) volunteering to make a difference. It’s incredible.”

“So we are all activists, whether we’re officially aid workers or volunteers or working with these organisations…There are so many parts to activism…they all work hand in hand together and without one, the other cannot function,” says Kahawaty.

As an activist working with refugees daily in Jusoor’s centres, Tutunji saw the need for an ‘Identity Program’ to teach refugee children about the significance of Syrian culture.

“When I used to ask (the children), ‘where are you from?’ They didn’t know… some of them were born here, some came when they were one or two.”

“If we want them to go back and rebuild Syria, they should have pride in their country and know that Syria is not only Daesh and fighting,” says Tutunji.

For Kahawaty, who is on a mission to ‘make the world a more beautiful place’, as her Instagram bio states, the fashion industry has taught her how to effectively communicate her activism with her followers in order to encourage response.

“Why is marketing so successful for fashion brands? It’s because you have all these people promoting a handbag, a trend…and people learn about it and then they go and buy it. With activism, If I’m not going to put it in people’s feeds, then they’re not going to know about it,” she says.

And while she claims the response to her activism has been extraordinary (perhaps evidenced most in the success of the Louis Vuitton and UNICEF campaign), Kahawaty insists that credibility and a genuine love for humanitarianism are vital to making positive change.

“I would say to models or bloggers or influencers or whoever wants to speak about a certain cause is to educate yourself… I definitely wouldn’t recommend to take up something for a day just because it does bring likes,” says Kahawaty.

“It’s important to dedicate yourself. Activism is a state of mind, it’s not a profession. You do not get paid for this. You do this because you care and you want to.”

Links to other articles:

Hype or Hope: Young People and the Future of Cryptocurrency

Both demand and criticism towards cryptocurrency has been increasing since the beginning of 2017, making knowledge and research critical at this stage. Despite the world of cryptocurrency going through plenty of rollercoasters during the last six months, it has caught the attention of not only investors, government institutions, financial companies but also eager young students […]

Nic Savage “Australia is famous for having impure MDMA… People don’t realise if you take pills wrong, you can die.” In September of last year, the ACT Government approved the inclusion of a free pill-testing trial at the Spilt Milk festival in Canberra. However, three weeks later, the festival organisers pulled out of the trial, […]