For years, meat has been regarded the be-all-end-all for bodybuilders, but what if a plant-based diet proved equally effective for building muscle? 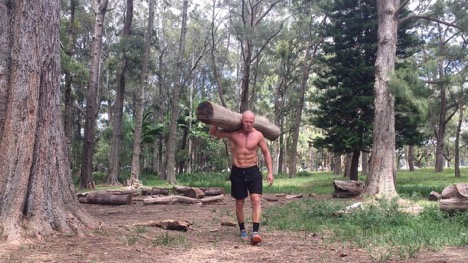 Most mornings, Russian-born personal trainer Stanislav Veniaminov wakes up at 5:30am and heads to Bondi beach where he trains most of his clients. After training, he fixes himself a bowl of oat porridge with seasonal fruit and nuts.

Sometimes at Bondi, he entertains beach-goers with gymnastic tricks. His favourite is the ‘human flag’, where he grips a street sign and holds himself up in the air, parallel to the ground, like a flag. This feat of strength is so challenging, it’s described as the “Loch Ness monster of exercises” by Men’s Fitness.

What’s surprising about this strongman is what he eats for lunch: a salad of broccoli, lettuce, spinach, avocado, purple cabbage, beetroot and falafel – that’s right, not a trace of meat.

Stan wasn’t always against eating meat. Three years ago, he was on a meat-heavy diet but suffered from fatigue, frequent indigestion and migraines.

“One day I was feeling quite sick and went to the butcher to get meat. I looked at the meat and it was full of blood. I felt quite disgusted. I was like – why am I eating this? I’m not a vampire. It feels gross when you have blood on your plate… it’s like vomit, you think about eating your own vomit – it’s the same thing. That made me change,” Stan recalls.

At first, Stan gave up meat. He decided to go vegan after looking into the mistreatment of animals in the meat and dairy industry. Little did he know giving up meat and dairy wouldn’t be such a clean break.

“I’d feel tired and blame it on not having meat or eggs, but when I thought back to when I was eating meat, I still felt bad,” recalls Stan. “Logically, it’s not like because I miss an egg, I’ll feel tired. Everyone will feel tired, no matter how good their diet is,”

“So I put these excuses aside, told myself to keep focused on eating plant-based food and all these cravings disappeared after half a year.”

As hard as it was to transition to a vegan diet, Stan has no regrets because he feels it has made him a better athlete.

“Everything is better now – my training, I lift heavier, good cardio, because I can train more, so I feel better than average,” he says,

Nawaf Alghanem, a Jordanian-born accountant and competitive bodybuilder, made a similar transition to veganism a year ago. He first swore off dairy due to lactose intolerance but went fully vegan after studying the impact of plant based diets on the environment and animal welfare.

“The turning point was that I just couldn’t justify my actions anymore. I realised I was just making excuses to do what is unethical, destructive and mindless,” he says.

He had been training regularly for a decade, but only debuted as a Fitness Model in the World Beauty Fitness and Fashion (WBFF) competition last year. Out of 300 bodybuilders, he and three or four others were the only vegans, so they were inevitably met with surprise from meat-eating contestants.

“‘Where do you get your protein from?’ That was the only question they [meat-eaters] asked, basically,” he recalls.

Despite being in the minority, Nawaf insists that vegan bodybuilders are in no way disadvantaged compared to those on an omnivorous diet.

“Bodybuilding is about eating the right number of calories, macronutrients and timing of your meals,” he explains. 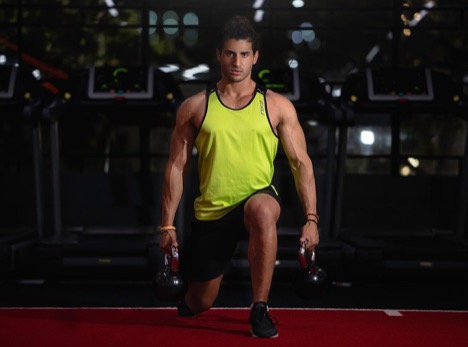 Competitive bodybuilder Dr. Eric Helms is a researcher in strength and conditioning at the Auckland University of Technology and has published several books to date. He agrees with Nawaf, that both plant-based and omnivorous diets are equally effective for muscle building.

“[On a vegan diet] one certainly can get adequate protein, micronutrients and all the nutritional components required to optimise muscle growth. However, it is a lot harder,” he says.

According to Dr. Helms, vegan diets become problematic in the lead-up to a competition, where bodybuilders need to shed as much body fat as possible. For vegans, maintaining muscle mass  while cutting calories is extremely difficult without relying on protein powders, which makes for a bland and repetitive diet.

As such, bodybuilding on a plant-based diet takes extensive planning and self-discipline. Nobody understands this better than Chris Rowe, a Sydney-based bodybuilder and personal trainer who went vegan 17 years ago.

Chris can recall over 50 occasions where he has been met with suspicion for being so big, as though he was on performance-enhancing substances.

“Some [people] tend to ask questions like ‘how often do you cycle?’ -a reference to cycling on steroids – “and I’d be like ‘nah I don’t do that’,” he says.

“Ultimately, people believe what they want to believe, but I think as well when they see I’m at the gym every single day, training consistently – the fact that I’ve been training for ages, they sort of realise that it’s just hard work.” 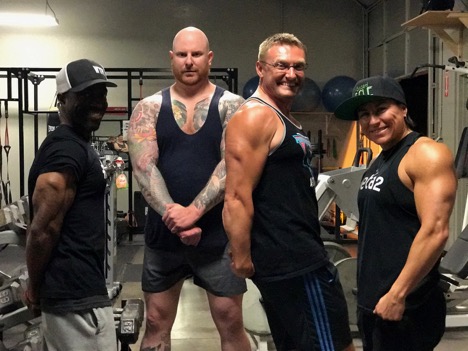 Chris believes there is much misinformation today regarding nutrition in the fitness and bodybuilding industry, where veganism is typically associated with being sickly and protein deficient.

Such were attitudes faced by personal trainer Stan when he first told his peers he was going vegan.

“All my friends are heavy meat eaters, so they’d make jokes at first – everyday they’d mention the vegan thing. They didn’t think I could do it,” he says. “Now, they’ve stopped. Now, they ask questions about my diet.”

Like Stan, Nawaf was asked similar questions by meat-eating bodybuilders at the WBFF, about how they too could try bodybuilding on a plant-based diet. Having successfully built muscle as a vegan, Nawaf now feels compelled to raise awareness about the plausibility of vegan bodybuilding. In November 2017 he was a panelist for Melbourne’s annual vegan festival World Vegan Day, sharing his personal experience and knowledge on plant-fuelled fitness.

In the same vein, personal trainer Chris tries to help others take a scientific approach to strength training and nutrition. He has attained 2 TAFE Fitness certificates to date and is currently completing his second Bachelor’s degree in Clinical Exercise Physiology.

“Given that I’ve been in training for 20 years and I’m a qualified personal trainer, I feel like I’ve gotta give back and help people,” he says.

In 2007, Chris founded Sydney Vegan Strength, a Facebook group aimed at encouraging Sydney’s vegan community to weight train and develop proper technique. To date, the group has almost 500 members and is an ever-growing resource for vegans looking to get ripped.

What vegan bodybuilders eat in a day

Finsta: The new era of cyberbullying

While many Australian schools are trying to combat cyberbullying through firewalls, a new online playground for bullies has emerged from the restrictions, fake Instagram accounts. By Kate Quinn – Z5114887 After the shock suicide of 14-year-old Northern Territories girl Dolly Everett, schools across Australia have started to implement stricter social media rules during the school […]

BY ANDREW LUCAS “He used to walk past my house everyday and yell out stuff, threaten me and throw stuff at my house, I was scared” – It’s the moment that prompted young Aussie boxer Jayden Heyward to take up Boxing. It was a move which helped turn the young teenager’s life around. At just […]

By Sophie Hodge As Australia’s waste crisis continues, innovators are looking for sustainable waste management solutions and finding answers in bizarre places. Used plastic bottles, broken phones, and worm poo all have one thing in common: they are all seemingly useless waste products. But companies are challenging the idea that waste is invaluable. Businesses across […]