Korean Pop’s unique entertainment has gained coverage in the Western entertainment industry through the exposure of social media and K-Pop’s strong communities and fandoms that have banded together to place Korean Pop in its worldwide element.

K-Pop’s diverse talent has formed an interest around their entertainment. K-Pop groups not only sing but rap, dance, story tell through their music and videos, create fashion trends and have a unique and intriguing personality.

Twenty-year-old Korean fangirl Rachel Hong recognises that “their music is upbeat…they do a lot of interesting dances to go with their music and they release [remarkable] music videos…[which is why I feel that they differ from] American music”.

K-Pop entertainment and Asian pop culture allow for their music to be a genre of creativity, and the themes of all songs are envisioned to have a greater meaning.

Each group has a specific style and persona which encourage self-expression which is a way that they dominate their music scene in an extravagant way.

Vox Media wrote an article displaying the reasons why and How K-pop became a global phenomenon. Journalist Aja Romano writes that the three things that make a K-pop performer are “exceptional high-quality performances (especially dancing), an extremely polished aesthetic, and an ‘in-house’ method of studio production that churns our musical hits”.

K-Pop’s memorable and fun persona also engages the audience on social media, as not only do they have killer moves on the stage, but they have killer dominance throughout their online platforms.

Andy Trieu expanded on the coverage and success behind KPOP, and how it has allowed for western media to take an appeal to them.

Andy noted that BTS, one of K-Pop’s biggest boy bands, “bring an audience” which means “dollar signs” to the Western industry.

“There are 7 guys that can really dance and have some great catchy music…their music videos [are] top notch and out of this world, and that keeps [people] hooked in. [The] initial spark is definitely …making them known in western media.”

Rainbow Chan, solo artist, producer and lecturer at Sydney University, born in Hong Kong and raised in Australia, articulates on the impact that social media has had on foreign artists and their social presence. Rainbow acknowledges the alteration and expansion amongst these platforms which has encouraged individuals worldwide to allow for foreign artists to integrate into western media. 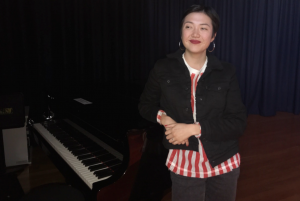 “Online platforms and shareable content is [easier to access, which] increase[s] [the] visibility…and I think that there is a more pronounced desire for [individuals]…to connect through …[these] forms…and build a new community [around foreign music and media].” states Rainbow Chan.

Fangirl Rachel Hong “was introduced to [BTS] through social media” and continues to utilise social media as a tool to feel connected with her favourite artists.

Rachel is a dedicated fan to K-Pop and in particular BTS as “I buy their albums, stream their music… retweet [what] they post … and actively [look up K-Pop fan pages] to find out what has been happening.”

Rachel reveals the way their music is more than just ordinary harmonies. BTS has created a music platform that “tackle[s] [the hidden] issues that people our age would be able to relate too”.

“They address [worldwide] social issues…[that] I feel I can relate to, even though I [was born] in Australia” states Rachel.

Rainbow acknowledges that their music is allowing to branch out of the norm, and expose individuals to common “uncertainty” which can allow for communities to “belong to something” through a cultural perspective.

By K-Pop groups exposing the social truths that many pop groups don’t endeavour within, allows for an expanding audience, and for fans like Rachel to be part of an evolutionary change.

“It is the idea of visibility in media, [which is] so important and I feel like now..[we are so much] more connected through social media and the internet [that] the information and content is being shared all the time.” states Rainbow.

The K-Pop culture entails a positive community, as “they have such a strong social media presence they …make you feel like you’re friends with them” states Rachel.

Andy established the importance of these fan bases as it has allowed for groups to be able to expand and integrate their persona into Western music and society.

In 2017, BTS won a Social Media Award at Billboard Awards Ceremony, “which led them to appear on shows such as Ellen, Jimmy Kimmel…all because of the power of social media”. 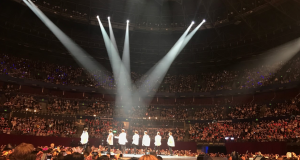 K-Pop boy band BTS performing in Sydney 2017 with a crowd of over 11,000 people. Photographed by Chrissy Chon.

Korean PR and Marketing guru Stacy Nam discusses the necessity of social media for foreign artist’s and its “gateway” into mainstream media.

“Korean music has its roots in social media…International KPOP fandom[s] [were] born from social media…[and now it is] growing strongly”.

K-POP’s “recognisable style” has gained a huge social presence as Korean Pop’s unique sounds and styles form a “fluid and interesting dynamic” to the entertainment industry, which can almost be like a “palette cleanser” to the Western world”. states Rainbow.

Rainbow, as an artist who incorporates “Chinese elements” acknowledges the high globalisation that these foreign artists have gained.

Music industries are noticing the demand for K-Pop stars, which has encouraged “western modes [to] consum[e] [Korean pop, and allowing for it to exist within the] entertainment industry”.

In July 2015 K-Pop boy band BTS, part of their Red Bullet Tour, performed at UNSW Roundhouse with approximately 2,000 Sydney based fans. In May 2017, BTS part of their Wings Tour, sold 96% of their tickets at Quodos Bank Arena, with 11,023 tickets sold. 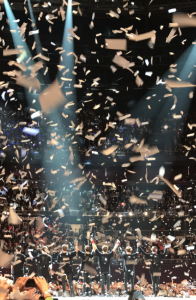 Rachel voiced K-Pop ideal presence, stating that they have “package[d] themselves in a particular way to appeal too [a] larger audience as well [as a Korean].”

“Surprisingly I have a lot of [Caucasian] friends that like listening to K-Pop as well…[which] was a bit unexpected.”

Andy also added that “we are seeing that bit of a crossover [and having] more and more people amongst the world getting to know K-Pop [which is creating] more of an appeal.”

“K-Pop is written by the best in the world from Bruno Mars, to Will.I.Am.…A lot of K-Pop [does] come out of LA, [which gives it a] Western appeal.”

Artist and academic Rainbow exposes that “originally these forms were borr[owed] from …Western pop stars but then it became its own genre. [K-Pop] took the ideas and developed into its own thing…[but] now it is interesting because you see western people borrowing from K-Pop.”

“It is an ongoing dialogue… [as well as the] melding of ideas and sounds.”

Despite these similarities, Rainbow still feels as though foreign music has its own style.

“I think that it is important to notice the nuance differences between each style and variation…While there are similarities I think people can take it in a very different direction too.”

“I think there will always be a gap there for K-Pop somewhere.” states Andy.

Rainbow expressed the positive outlook that she has on foreign music and states that “it will grow into something [a lot bigger worldwide, as]…there is a lot of audience[s] out there…[and a huge] desire to consume [new cultural forms in the entertainment industry].”

K-Pop’s unique presence in the entertainment industry has been noticed by Western society, and of course, with the help of their online community platforms, K-Pop artists have their dedicated fans to thank for their expansion and success into western media and music.

By Julia Yan With the pet industry in Australia worth an estimated 12.5 billion dollars a year, talent agencies connecting Australian pet influencers with brands have become the latest trend.   Power Pets is one talent agency that caters exclusively to ‘celebrity’ pets on social media such as Instagram, Twitter and Facebook. Launched in late […]

I Should’ve Known Something Wasn’t Right

A look into the reality of being an au pair. Written by Emily Van Arendonk. To most, the experience of being an au pair sounds like a dream. Traveling the world and seeing a more intimate side of culture in exchange for childcare and light housework. But, for some, this opportunity of a lifetime is […]

Veganism is the key to become strong

The strongest animals in the world are plant-eater. Bison, Elephant, Hippopot and me!  By Nanda Lakhwani, Iain Salvador, and Claudia Chiu Stanislav, personal trainer based in Sydney’s Eastern suburbs. (Image supplied) Most mornings, Russian-born personal trainer Stanislav Veniaminov wakes up at 5:30am and heads to Bondi beach where he trains most of his clients. After […]