With the distinct sounds and smells of animals permeating the air at Taronga zoo, people push to the front to get a close look at the tall, elegant tiger in its luxurious jungle enclosure. Next to it, a native Australian bat family sleeps in a small tree, with just one lone person offering them a glance.

This is the situation reflected in animal conservation and research today in Australia, and the rest of the world. Year after year, research and funding flood into campaigns aimed towards tigers, pandas, snow leopards and the like. More genetically-challenged endangered animals however, are left in the dust.

Trish Fleming, professor at Murdoch University and author of the scientific paper ‘The good, the bad and the ugly’, has shown Australia is no different from the rest of the world in favouring the cute and cuddly koala over a native bat. Her study divided Australian animals into 3 groups based on research dedicated to them, with the “ugly” trailing behind.

“You don’t want a photo of you with a native bat but you probably would take a photograph of you hugging a koala bear, something like that makes a massive difference to the profile of the animal and as a consequence as well we’ve called them the ugly,” Trish said.

The “good” were Australia’s monotremes and marsupials, which attracted much research due to their uniqueness. The “bad”, invasive eutherians such as red foxes, also attracted heavy research in terms of how to control them. Left behind were the “ugly”, Australia’s native bats and rodents, which despite making up 45% of the 331 species studied for the paper, have received dismal research.

“We find that our native eutherian species are our rodents and bats, they have very little research investment in terms of how much time people spend working on them and certainly in terms of financial investment in that area,” said Trish.

The dominance of ‘charismatic megafauna’, our tigers, polar bears and other elegant mammals, in research, conservation and funding has been known for years. But what has been done to try bridge this gap? In terms of funding, the answer sadly is not much, but awareness is a different story.

Biologist, writer, TV presenter and comedian Simon Watt is leading a successful initiative in the UK to bring recognition to ugly endangered animals. Currently, nothing similar exists in Australia.

The Ugly Animal Preservation Society, founded by Simon Watt, knows the aye-aye certainly won’t be winning a beauty pageant any time soon, but is still dedicated to raising awareness for the aye-aye, and all other genetically-challenged animals.

The Ugly Animal Preservation Society takes a unique approach to the topic of conservation.  The group holds comedy nights throughout cities in the UK with 6 comedians given 10 minutes to champion their chosen ugly, endangered animal. The winning animal, voted by the crowd, becomes the mascot of that area. An initiative similar to this is needed in Australia and could have massive impacts for raising awareness.

“This is directly lampooning the panda as the WWF mascot. We’re looking for the anti-panda.

“Oxfordshire is the sturgeon, the Beluga sturgeon… London is the proboscis monkey. Cambridge is endangered sea slugs. Aberdeen is the Sulawesi macaque… Hull is the aye aye,” Simon said.

This very clear lean towards charismatic megafauna in conservation, research and media can be explained. An inherent human trait, the baby schema effect, means we perceive certain features as cute, and this encourages care-taking behaviour.

“The baby schema is pretty much what stops us from killing and eating our own children, which is good for survival you know, but maybe bad for a bit of logic. So, we tend to like animals that look a little like babies,” Simon said.

Public opinion therefore strongly favours these animals and their advantage for the likelihood of receiving conservation funding is unparalleled. 45 people were surveyed by our team and asked ‘which animal would you be more likely to donate money to’ with a common theme emerging among the results. 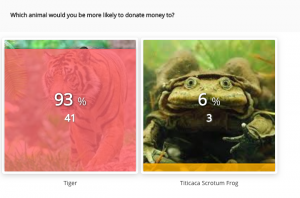 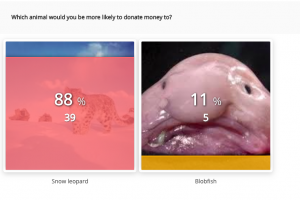 Humans are genetically biased towards the fierce and cuddly over the small and slimy, so are ugly animals a lost cause? Will these species be condemned to extinction because society doesn’t approve of their looks, or can they be saved? Simon Watt says it is possible to save them, but it will require immense effort.

“We’d have to do an awful lot more … again the kind of purpose behind my campaign wasn’t just to try and save these animals but for people to try and understand how big the crisis is. And actually also to acknowledge that in a time of crisis we probably have to focus where we get the most biology for our buck. So a species based approach is not good enough and we should probably be using an ecosystem based approach. Protect a habitat and the animals will look after themselves.”

This issue becomes even more pressing when we look at the fact some of these ugly endangered animals could actually improve life as we know it. The giant panda has received billions of dollars in funding over the years, and is the poster child for conservation, moving from critically endangered to vulnerable status. Whilst this is a win, does the panda matter more than these animals?

The endangered naked mole rat does not feel pain, and is immune to cancer, opening up a range of possibilities to scientists. Aye-ayes are crucial to their ecosystem for eating wood boring beetles, but being considered an omen of bad luck and killed on sight, their population has halved in the last 3 generations.

Baird’s tapirs are integral to the rainforest ecosystem as they help recycle nutrients and disperse seeds, but there are less than 5000 left due to deforestation. The California condor prevents the spread of disease in the ecosystem by feeding on dead animal carcasses, however there are just over 200 remaining in the wild.

Nature policy analyst James Trezise at the Australian Conservation Foundation says the problem is even bigger than it first appears, especially in Australia.

“[Australia is] one of the world’s leaders when it comes to threatened species,” James said.

“The public don’t understand the challenge that we face in terms of the extinction crisis globally and in particular, Australia. One of the key bits of research that has recently come out has shown that there’s such poor awareness that even the charismatic species like lions and giraffes and koalas, that everyone knows about, people aren’t even aware that they’re in peril of going extinct … in our lifetime.”

The extinction crisis has become so bad that it seems no animal, ugly, beautiful, or somewhere in the middle, is safe from its grasp. To prolong the lives of our unique animals here in Australia, it will require an all hands on deck approach.

“There’s two parts of the challenge. One is actually mainstreaming the loss and talent of biodiversity loss in Australia, that’s certainly not a high ranking issue when it comes to how people decide to vote… The second part though is having the systemic reform so that they don’t need to be a charismatic or loveable or fluffy species to warrant conservation.”

Delivering the goods By Harry Walter, Claudia Byatt & Cassandra Nguyen. Sipping on a glass of red or cracking open a cold one at work is a ritual most workplaces reserve for special occasions. However, for David Berger and Nathan Besser, the co-founders of alcohol delivery service Jimmy Brings, having a ‘staffie’ in the office […]

More than half a century after the prohibition of LSD and magic mushrooms, scientists around the world are hailing Psychedelic drugs as a new treatment for mental health issues. An increasing number of Australians are seeking out alternative forms of therapy to treat mental health, as the shortcomings of traditional anti-depressant medicines are leaving many […]