How do Muslim Sydneysiders navigate their biggest religious celebration among the demands of family, work, and life in a multicultural society?

From May 15 to June 14 this year, Muslims across the world will celebrate Ramadan, Islam’s sacred month of fasting and prayer.

With Greater Sydney’s population being 5.3% Islamic according to the2016 census, Sydney Muslims practice Ramadan as a minority community.

These are the stories of four individuals’ experiences of Ramadan in Sydney: what it means to them, and how they observe the practice amid their daily lives. 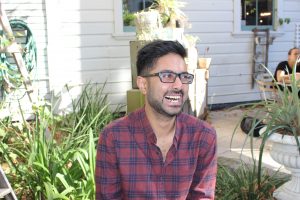 23-year old Jarri Heydar left his family in Pakistan and moved to Sydney two years ago to study Arts/Law at UNSW.

As a gay Muslim, Ramadan is a time for Jarri to navigate how his faith and sexuality can positively co-exist.

“My relationship with my religion has been a bit strained at times and also very rich at the same time,” Jarri said.

“This religion doesn’t have a lot of space for LGBTQI identifying people, so Ramadan has great opportunity to say that I am gay and I am Muslim and I will participate in Ramadan, and it will be just as valid.”

For Jarri, Ramadan is about practicing self-restraint and self-reflection while maintaining his everyday obligations, including his UNSW Law Degree.

“A lot of people use Ramadan as an excuse to be lazy, but Ramadan to me is about doing everything that you’re meant to do in your day – not neglecting your duties.”

Living on a student college in Sydney, Jarri’s Ramadan relies on creating community without the comfort of family.

“Celebrating here is a bit different because I don’t have family to celebrate with… a big part of Ramadan is celebrating it with your family and friends,” Jarri said.

Last year, a college chef began a Ramadan breakfast to provide for Muslim college students, creating a sense of community for students who, like Jarri, spend Ramadan away from family.

“He [the chef] did all the work for free – It was the most wonderful thing… all my mates from college would come down to the Muslim breakfast,” Jarri said.

“If I missed family I didn’t anymore.” 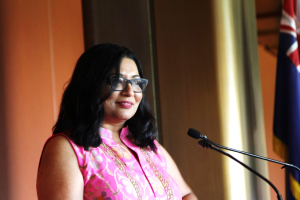 Mehreen Faruqi is the NSW Greens MP navigating Ramadan amid the demands of parliament and the difficulties of practicing Ramadan in an Islamic-minority country.

With life as an Australian politician differing greatly from her life in Pakistan, where she lived until 1992, Mehreen finds Ramadan harder to observe in Sydney.

“Ramadan is the time I miss Pakistan the most, because in Pakistan the whole place is geared towards it, we have shorter work hours, and in the evening it’s a big gathering of friends and family when you break the fast,” Mehreen said.

“It’s very different here in Australia because you’re in a small minority who are fasting, and for me, if Parliament is sitting I really have very little flexibility … I still try and do it with family whenever I can.”

Despite being trickier to navigate in Sydney, Mehreen finds that fasting provides a sense of peace and brings her mind back to the “bigger picture.”

“Within a couple of days, my body and mind get used to it. Your mind is a very powerful thing,” Mehreen said.

“It provides a sense of calmness because it is about spirituality and meditation, getting your mind off bodily things like food, and concentrating on the bigger picture.”

After moving from Pakistan to Australia in 2012, 24-year-old Ajoy Cena became the chef and owner of Ekush restaurant in Sydney’s suburb Lakemba.

Despite being a chef, Ajoy does not cook for his family during the sacred month. This is because he’s in the Ekush kitchen providing for his customers, Muslim and non-Muslim.

The largest problem on-the-job, Ajoy says, is testing the food he prepares during fasting hours.

“I think the only problem is that we have to taste food… When we taste food and we have to – as soon as we taste it, spit it… I have to think about not swallowing it!”

Hosting a largely Islamic staff, Ajoy must also ensure that the Ekush workers are able to break their own fasts and fit in their daily prayers among the rush of diners.

“I have to make sure the guys [the Ekush staff] serve and then we’ve got to take a break. We’ll serve for 20 minutes and then we’ll take our own 15-minute break to eat,” Ajoy said.

“Afterwards, one by one, people will start praying and we’ll switch out in between.”

Ramadan gives Ajoy a time of calm among the craziness of Sydney life through family and food.

“In Sydney, people are always rushing. During Ramadan it kind of slows down a bit for people. If you think about celebrating Christmas, it’s exactly the same,” he said.

“Food brings people together. That’s my profession, I do this for a living.” 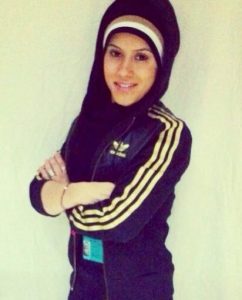 Being a black-belt, kick-boxing hijabi with her own personal training business, Layla Jheir is a Sydney-sider who is always on the move.

For Layla, Ramadan is a time for focusing on faith while also staying active and healthy.

“I take every day as it comes. I still go gym and train but just not as hard! I take that month a little easier so I can focus on the spiritual part of myself,” Layla said.

Living such an active lifestyle, one might think that Layla would struggle with a month of fasting, but the 28-year-old asserts that Ramadan is actually a great time for health and fitness.

“Fasting is awesome for an individual regardless of what faith you follow. It helps in heart and brain function, it helps eliminate toxins from an individuals’ body,” she said.

Charity and equality are other aspects of Ramadan that Layla emphasises, but her favourite part of Ramadan is being able to take a step back and focus on faith and family.

“We make sure we pay our charity to the less fortunate, so the poor can celebrate Ramadan like all the wealthy Muslims do,” Layla said.

“My favourite part is eating with the family and late-night hang outs… in Ramadan I do my very best to be the better person in everything I do.”

When asked to share their final messages about Ramadan, here’s what the four had to say:

“We have great food! Come join us for food – you’ll learn a lot about our religion. I think the greatest conversations happen over food. Ramadan is all about sharing our culture, our traditions. It’s just about love and it’s about community.”  – Jarri

“Going hungry is not a punishment – it’s thinking about other people as well, who might be less privileged than you are.” – Mehreen

“Come experience the food. Australians come in during Ramadan and they’re meeting Islamic people. Everybody is kind of together in that time. Nobody is really looking out for ‘who’s white, who’s Jewish.’ Nobody cares. Everybody is eating.” – Ajoy

“There is no place for racism in Islam, we are all equal and there is none better than the other. Ramadan is amazing, there is so much to know about it and what Muslims do throughout the month.” – Layla

When we look around the city, there is always a sharing bike in our sight. In these few years, more and more sharing bikes companies started operating their business in Sydney. It is not hard to borrow one around the corner. But seriously, who have tried this service before? Is it really necessary to have […]

Hannah Yang & Alexandra Thompson For publication in The Wentworth Courier: Maria’s in-laws own a duo of popular restaurants in Elizabeth Street, Paddington (Cipri Italian and Barbetta Cucina). Her and her sister, Rose, are well known in the area. In 2003, 26-year-old childcare worker, Maria Gallo, woke from a 17-day coma, after being run over […]