“Obviously, we can’t talk about feminism without talking about equality of opportunity and representation.”

Sydney Boys High School Equality Prefect, Lincoln Hiu, 17, is one of the young men out to tackle issues surrounding feminism and the importance of fairness between genders.

In light of International Women’s Day, Sydney Boys High School (SBH) students created a video explaining why feminism is important to the women in their life. The video showcased numerous young boys with confronting stories about times where men had unfairly treated the women in their lives.

Men and women still stand on uneven ground when it comes to equality in the work place, according to the Australian Bureau of Statistics, the national gender pay gap still separates men and women by 15.3%, with men receiving higher wages on average.

An initiative SBH has taken to shed light on this issue is create a combined panel with Sydney Girls High School Prefects. The two school’s prefect teams have started a think tank where they discuss equality in the workplace, the Me Too movement and women in STEM.

When it comes to teaching young boys about feminism, it becomes an issue of making the topic appeal to them.

“It’s important for students to feel that they have people that they can relate to in terms of conversation,” Lincoln says.

Deputy Principal of SBH, Ms Rachel Powell, believes the word feminism is at the heart of a lot of issues about the movement itself and to her the word is all about equality of opportunity. Since she has started working at the school.

l she has been working with students to have a greater understanding of Indigenous issues, issues around race, and issues regarding feminism. The school even has an assembly for International Women’s day.

“The first one was the Sorry Day assembly, we added that about six years ago, then two y

ears ago International day against homophobia and transphobia as an assembly, and then the International Women’s Day assembly as well,” Ms Powell says.

In regards to Ms Powell’s personal experience as a woman in the workplace, she does not feel as though she has ever received any unfair treatment based on her gender. In fact, she speaks of a particular time where in her opinion, a man held a better understanding of feminism than a woman.

On top of their prefect think tank and numerous admirable assemblies, SBH also has an initiate created by an ex-student that teaches boys about pornography called ‘One bird, 2 bees’. Students from year 8-9 are informed about the problematic nature of it and discussion of consent.

“Feminism, at its heart, its the pursuit of equality,” says Angela Griffin, 20, UNSW Women’s Collective Leader.

Issues surrounding feminism can have a large impact on women’s lives and it is important for young boys to grasp the concept of feminism and recognise its gravity. Angela Griffin believes one of the reasons boys are reluctant to get involved in the feminist movement is because they can feel as though their identity group is being personally attacked, which can be confronting.

“It can feel like someone’s saying to you, oh, well you’re a white man or a rapist,” Angela says. 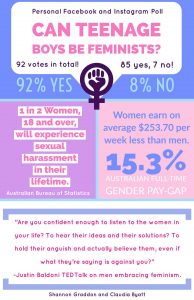 “I was just speaking to one of my closet male friends last night about the way that I was treated when I started having sex for the first time and he had no idea about any of it and he was shocked and outraged,” says Angela.

In regards to teenage boys and their awareness of feminism combined with his knowledge of interacting with young boys on a daily basis as a teacher, Jefferey Lewis from Brisbane Grammar School says, “I’d suggest there’s strong awareness of the impact of advertising and media representation on women’s perception of themselves. They also seem to be across the gender pay gap issue.”

A personal Instagram and Facebook poll created, allowing votes by men and women saw that 92% of people out of 92 believe that men can be feminists. However, some boys are leaving it to the ladies.

“I believe there are more important things to worry about in life… I’m not against the whole idea of feminism…but for this whole topic I just don’t care for it too much,” says Zack Avramides, 22.

Schools do not specifically teach students about feminism, in fact some boys hadn’t even heard about women’s issues until high school. A UNSW student who attended a New York high school at the age of 12 received some schooling on the matter.

“This lady came into the classroom and she looked at us and said, today we’re going to talk about women’s issues and then we read about it for like four weeks,” The 20 year-old UNSW student  says.

Feminism is a strong movement that is only growing more powerful with the endless access of information and statistics people have gender inequality. The main problem regarding feminism is that it is misunderstood and holds a bad reputation.

Sydney Boys High School, beginning with their International Women’s Day video, assemblies about women’s issues and continuing on to create initiatives to teach boys about respect for women are well on the way to tackling feminism. They have discovered a way to talk about women’s issues in a less confronting, more approachable way to young boys. Feminism is not just about women, it is a matter of equal opportunity for all genders and more schools should follow Sydney Boy’s lead to ensure young boys recognise its worth.

Phoebe Anderson z5116842 Has our obsession with progression taken a step to far? Driverless cars are the newest example of technology taking over, where everyday actions are replaced with the power of technology. No longer does man need to sit in the driver’s seat, science is taking the wheel. So far there have been mixed […]

Driverless cars: Vehicles of the future?

Written by: Tania Tan Until self-driving vehicles are fully on the market in Australia, questions regarding the safety of such vehicles for drivers and pedestrians alike will continue to persist. Opinions on driverless cars are relatively positive as driverless cars are expected to be powered by smart technology that may keep the roads safer. “I […]