It accounts for $450 billion AUD global industry, yet the freedom for budget-conscious millennials to score the latest designer ‘it’ piece does not evoke thoughts of an insidious market underbelly; one deeply embroiled in organized crime, money laundering and the exploitation of human rights.

As millennials have expressed an increasin , why does the replica handbag industry continue to flourish despite publicised accounts of human and fashion industry detriment?

Is it a case of cognitive dissonance as a symptom of budget-conscious western consumerism in respect to unethical fashion manufacturing? Is it a lack of education in respect to the funding of criminal activity? Or is it simply a case of increasingly widespread victims of fraud?

A digital survey was disseminated at the beginning of this investigation seeking to understand millennial Australians buying motivations, in respect to ethics and factors in decision making, and whether they possessed a ‘luxury’ item. Of the 90 respondents interviewed, 62 have purchased what is considered a luxury item. However, 35 individuals within that number knowingly purchased replica goods, illuminating the dissonance between portrayed attitudes versus actions. 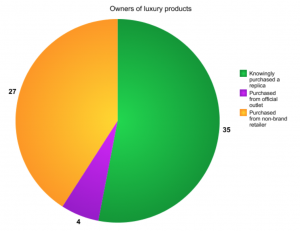 A large factor contributing to compliance in the replica goods industry can be linked to the case of prioritising desires and budget over education, perpetuated by the ubiquity of the digital market and the apparent normalisation in lieu of understanding the ethical repercussions. Maryanne Leslie* is a 24-year-old Sydney woman who works in the fashion e-commerce industry. In the past 2 years, she has purchased seven replica luxury products from various sellers on the Internet – most notably, from some of the 20 000 Instagram accounts dedicated solely to the retail of ‘top quality’ designer knock-offs.

“It’s a case of perceived value,” Maryanne states when questioned on her consistent purchases, which range from Gucci and Prada to the highly coveted Hermès Birkin. “Working in the industry, I know that a leather designer bag would only cost $200 to produce, yet with almost an 800% increase on the retail price that’s where I draw the line. Replica designer products are almost identical in design and quality.”

“If it’s a question on ethics, I have no reason to believe there’s foul play along the chain,” Maryanne elaborated. “The bags I purchase are extremely high-quality, and I’m told they’re all actually made in the same factory as the real deal – they’re just factory seconds, and luxury production houses put strong guidelines on the treatment of workers.”


In the case of Maryanne’s purchases, if the trade is not carried out through the original Luxury houses, where does the money made by these apparent factory seconds go, and who is profiting? A large portion of those who willingly purchased said items as exhibited in the initial survey hints at a lack of education regarding the profit-chain of the counterfeit industry, especially when considering the value assigned to ethical practice when purchasing. The French Government’s investigation into the 2015 Charlie Hebdo attacks revealed that the guns utilised by terrorists were purchased with money obtained through the sale of fake luxury products.

Maryanne, like other respondents in the survey, exhibited shock at her unknowing compliance in potentially funding terrorist organisations. Yet the degree of separation to which individual’s purchase goods online – often from brightly curated Instagram profiles laden with ‘it’ girls; hardly emanates signs of a sinister back-alley black market, thus could explain why consumers continue to purchase from such merchants under a non-threatening guise.

A Personal Investigation into Where It All Begins: Visiting the ‘Manufacturing Capital of the World’

Visiting the Baiyan World Leather Trading Centre in the southern Chinese city of Guangzhou, insight into the physical grandiosity of the counterfeit market becomes explicitly apparent with dozens of multi-story shopping complexes and thousands of front-of-house employees dedicated to the trade. Immaculately presented stores are lined with top-quality, or ‘yuandan’ as locally known, straight-off the runway goods. The market is an international buying destination, accounting for the origin of almost all Asian products, with thousands of tourists and wholesale traders passing through each day due to its reputation as the mecca of high-quality, low-price ‘factory seconds’, as claimed.

In the particular case of the above store, bags of an uncanny resemblance to the Prada Cahier and Celine Phantom are presented in the front window, and on close-inspection are sans-label of the iconic front stamp. The shop assistant was quick to offer the price of ¥1100 ($230 AUD), ushering to a storeroom concealed behind a curtain. He reveals the bag of interest, this time embellished with the official Prada logo. For $3500 AUD less, one could purchase a perfect Italian leather replica.

“Do not come out with the bag,” he states standing between the curtain and the shop floor. “Authorities are around, there will be trouble if they see the logo.”

The sight of heavy police presence within the Baiyan Center amongst abundant almost-obvious replicas is conflicting. The operation of a blind-eye approach to the illegal trade is apparent, a possible reason being the significant contribution the center has towards the local economy. Another loophole present is the offering of international purchases over WeChat, with contact details provided for every store, illuminating both how easy and how beyond borders the commerce of replica goods exists within the age of social media.

What is the case however when these items are purchased in bulk for re-sale, unknown to the next buyer? Whether revenue generated from such sales is channeled into terrorist organisations or to other black markets, a more frequent victim is the individual purchaser who has succumbed to massive inflation for an inferior production.

Revisiting the earlier survey, 27 respondents bought what they believed was an authentic product, 23 of which from non-brand affiliated online retailers selling products as brand new or lightly used. A recent study into the luxury handbag market however revealed that of all the items available for sale, only 10% were authentic. (Quach, Thaichon 2018).

Amelia Parsonson, a 23-year-old student from Sydney, recently became a financial victim of the fraudulent resale of luxury handbags. In 2017 she purchased from the website [find website] what was described as the Celine Mini Clasp bag featuring the limited edition red interior, and for $2000 it seemed a fair bargain considering it retails for almost $3000.

“It was a graduation gift, split halfway with my parents,” Amelia spoke of the transaction. “Just as I almost saved up enough on my end, the $1500 that took 6 months, the bag had already sold out in Celine stores all over – which was a bit of a slap in the face. When I was searching online trying to get my hands on someone else’s, I came across a site that was selling brand new for almost $1000 cheaper. I put my details in straight away as I didn’t want to miss out again.”

The bag received seemed suspicious, which Amelia then took to the Celine store in the city for them to verify that it was indeed fake. There was no avenue for criminal justice however, as just as quickly the website she purchased off had been published, it was already taken down by authorities representing the intellectual property of major luxury brands.

Cases like Amelia’s are not uncommon; every week retail assistants such as Shazzy, who works for a highly established Italian luxury brand, encounter individuals who bring their questionable online purchases into store seeking validation.

“The worst thing is we can’t offer an opinion when people come in store, as we do not want to be involved in any legal action,” Shazzy says of the encounters. “It’s getting harder to spot a fake.”

Whether consumers are intentionally purchasing replica goods, or are becoming victims to such a lucrative trade – there’s a clear indication of a disconnect between consumer attitudes and actual behaviors. The millennial age group continues in the fight for fashion ethics, yet as the replica industry continues to thrive – sales of replica goods have skyrocketed in the past 6 years – how long will this cognitive dissonance operate under the guise of ‘value for money’? Education appears to be the fighting force, yet with the boom of e-commerce, will the truth ever be able to catch up?

*Names have been changed to not reveal persons engaging in unlawful transactions.