Graffiti has always been a dominant part of suburban culture in Sydney, receiving both positive and negative attitudes from the community who are concerned over the type of culture it perpetuates within the area.

The Sydney Suburb of Caringbah has recently received a make-over in an effort to re-polish a ‘vandalism hot-spot’. The initiative’s aim is to rid the community of vandalism by embracing graffiti style work through commissioned artists.

Obviously, there is systemic issues behind the reason why people tag… I feel like we should focus on targeting the root cause if we want to decrease that kind of tagging and vandalism.” She said.

In a general survey taken, 50% of people believed that street art is an issue in Sydney, while the remaining 50% believes that it is an artistic form of expression that improves some areas.

“Looks better than ugly grey buildings.” Said one participant. “Some pieces are political, thought provoking and beautifully presented…they reach a wider audience and it doesn’t have the elitist stigma that art galleries have attached to them…Street art is for the people by the people”

Another participant made another argument, stating that “Sometimes graffiti can look like vandalism if it is unappealing, or placed somewhere where it should not be…It creates the look of a dirty city and lower socioeconomic status in that area, which people may object to.” 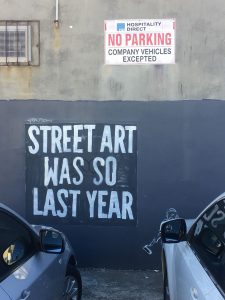 Sydney’s walls have become an open letter to society, allowing for both amateur and professional street artists to bring about real political and social concerns to the community.

“In Surry Hills, kind of the Darling Hurst area there is a really great piece right now that sort of commemorates a woman who was raped in like this ally way… it was this beautiful pink cursive installation that went around the corner of the building and I thought that was really sensitive and lovely,” said Naomi.

Community members and street artist in the Inner Western suburbs such as Newtown and Marrickville where street art is popular, believe that street art brings about a culture to the area.

“There’s a big history of political street art in Newtown… a lot of good murals that have been around for 20 or 30 years that people have really been part of…think it’s a reflection of the culture in the area,” said Newtown resident, Adam. 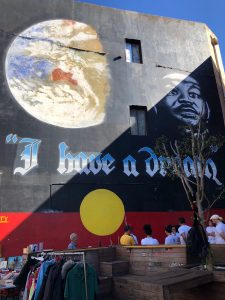 Figure 2 Picture by Hannah Yang, “I have a dream” Street art in Newtown

Mariko Konno, a street artist who formally worked in Sydney, argues that areas in Inner West are more accepting of street art as they want to be able to separate themselves from the city and freely express themselves.

“You know with street art, it starts to become more known,” she said. “Contemporary paintings and people just expressing their own emotions and their own talents to the world, so people can see it, and also just express themselves.”

Street Art in the Western suburbs throughout the 80’s provided dysfunctional kids who didn’t fit in, an outlet to express their stories to the community.

Mariko talks about guys from the 80’s who would keep to themselves and graffiti as a way of an outlet from their dysfunctional home situations.

“They kind of just wanted a thrill and you know, just, an excitement, and that was sort of the illegal part, being a young person and not fitting in, having shit happen at home… it’s sort of a way of escapism.” She said.

This has created a culture around the Western Suburbs which Mariko believes to be shifting to a more socially acceptable form. 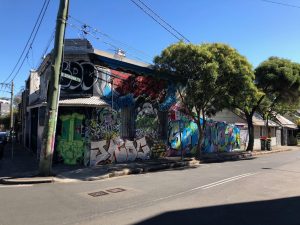 “You can see in the western suburbs for sure, you know, but a lot of them are starting to grow up, and now that they’re older it’s like taking people under their wing, so for more of an artistic aesthetic, so they learnt techniques using really, you know, basic house paint.” She said.

Members of different communities were divided when trying to distinguish a solid difference between between acts of Vandalism and street art in the area. Many however, were able to agree that un-commissioned texts or tags with little skill were vandalism.

“I think there’s also a difference depending on who the person is and their intention, because people probably graffiti for the thrill of it or to leave a mark, but street artists often have a social message.” Said Venessa from North Sydney.

Lottie Alexis, another Street artist in Sydney, also agreed with Mariko’s statement that communities in the Western suburbs are more open towards street art.

“Its good in this area because you can just go up to a house and if you get permission from the owner you don’t need a DA or anything.” She said. “I know that in the city, Sydney council, in areas like Glebe, there’s heaps of DA and it is such a process.” 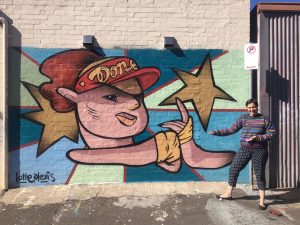 With the community having concerns over the type of culture street art perpetuates within the area, one thing everyone can agree on is that commissioned street art that is personal and has meaning leaves a positive impact on the area.

Naomi Segal says that she would like to see more street art around Sydney’s city centre, expressing her disappointment in the lack of culture it is currently providing. “I think that it’s something that needs to be embraced more I think,” she said.

Areas such as Newtown, Caringbah and Marrickville have had positive responses from the community on the type of culture it creates for the suburb.

“I feel as if right now there’s like sort of peppering’s of street art around Sydney and I feel as if there’s been an effort to kind of make a street art precinct, like a root you can go down,” said Naomi. “But like maybe that hasn’t been pushed enough because I’m not really seeing that much… I feel like there should be more.”

Making Her Mark: The Life of an Aussie, Arab Advocate

Abby Butler and Paddy Jow It’s almost easy to miss Amna Karra-Hassan as she walks down a Strathfield shopping strip. Dressed in jeans and thongs, her hair wrapped in a beige hijab, it isn’t until the self-described “Aussie Arab Muslim” begins to speak that you realise why she has been named as one of Western […]