The Royal Commission into Institutional Responses to Child Sexual Abuse is not an easy discussion to have, but it is the hope of previous generations, their suffering, and their courage, that will ensure abuse never happens to another child of Australia, writes Jackson Eldridge.

“That year (1975), a group of 20 boys went with their schoolmasters to a beachside camping ground for the weekend. During the camp, it arranged for boys to re-enact scenes from ‘Lord of the Flies’. This involved them running through the bush at night and hunting each other down. ‘It was done as a game’, Jaden said. ‘But it was more sinister than that.’

That night, Jaden was raped by both men.

Soon after the camp, Jaden disclosed the rape to two guidance counsellors. The two women dismissed what he told them. “They got cross with me and said if I said these things my parents wouldn’t love me anymore”, Jaden said. “They did nothing about it. It wasn’t even raised. I don’t see how it’s possible that someone can say that and it’s not even questioned.”

Jaden continued to have troubles with his sexuality and emotions throughout his life despite the love of a wife and a four-year-old child. 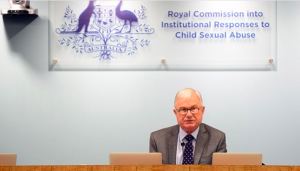 “I was disgusted and revolted.”

Harsh and extremely confronting, that narrative is just one of eight thousand shared with the Royal Commission.

The public inquiry was a response to generations of child abuse and sought to investigate the responses, or in most cases non-responses of governmental and non-governmental institutions to reports of sexual abuse.

The final report handed down by six independent commissioners – those tasked with overseeing the commission –  provided a number of key recommendations to address and acknowledge the abuse suffered by Jaden and other survivors.

Of note, the National Redress Scheme was highlighted as a means of providing financial compensation and working toward the acknowledgement of abuse, pending agreement from the States and Territories. 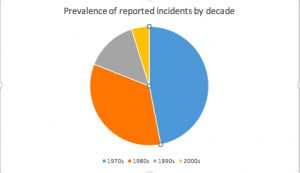 However, Prue Gregory, the principal lawyer of Knowmore, a legal service offering advice to victims and families of institutional abuse, suggested the Redress Scheme, as the primary recommendation of the Commission does not do enough to address the wrongs of generational abuse.

“The redress payment is only an acknowledgement. A monetary repayment will never replace the life that’s been lost.”

“I think we were horrified with the thousands of people that came forward to tell their story. As a society we let these people down.”

Anne Cossins, a professor of criminology at the University of New South Wales, likewise holds reservations regarding the effectiveness of the Redress Scheme.

“I’ll be waiting until the scheme is put in place across a number of states before I comment officially on its worth. It’s too early to say.”

The final report however identified the profound impact of those who took part in the narratives. The Commission was told, that if it were not for the investigation, many would not have disclosed their experience of sexual abuse with one in ten disclosing their cases for the first time.

The Commission heard that engaging with the investigation and sharing their stories had encouraged survivors to seek redress and advocate others to report abuse suffered in their formative years. This in turn led to an increase demand for support services, such as Psychologists and General Practitioners and inquiries from Police Officers to investigate crimes against survivors.

While academics such as Ms Gregory and Ms Cossins currently hold reservations as to the ultimate effectiveness of the Redress Scheme program, the evidence provided by the Commission suggests there are already initial benefits to to survivors.

Both Gregory and Cossins also noted the specific difficulties males have in moving past abuse suffered in their early life, with heavy social stigma attached to sexual abuse and the related mental health isssues.

“Males and aboriginals have always had trouble adjusting to life after abuse. For them, moving forward is an arduous task.”

Male victims comprised 64.3% of all reported cases to the Royal Commission, highlighting the prevalence of incidents within the gender, and a need for greater consideration of their mental health needs, as opposed to financial compensation. 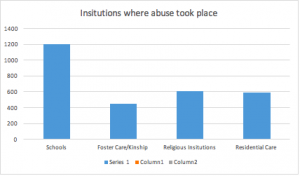 Daniel Paul, a survivor from the 1970s, spoke in regards to the abuse he received while a warden under the care of the Church of England,

“A lot of blokes want to run and hide, like me. You sort of run, you’re hiding, but they just want to bail out, instead of deal with it, get over it.” 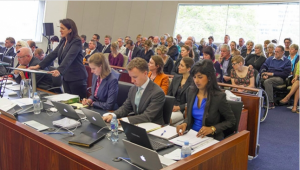 Daniel recounted how he has continually struggled with alcoholism and illicit substances as a means of dealing with anger.

During the late 2000s, Daniel received an ex-gratia payment from the Anglican Church in the vicinity of $22,000 almost half of which went to his lawyer. More recently, after the Royal Commission was established Daniel received a further offer of $53,000.

He suggested payment be increased to cover medical bills, but this was refused. He thought the offer of money, “Just shuts you up a bit more.”

Thousands more narratives sound similar to Daniel’s. Abuse as a young child has led to both personal and professional issues in later life.

At the closing of the commission, it was made clear by the commissioners the protection of society’s greatest asset (children) is just not the responsibility of underfunded and underappreciated statutory services, but a role all Australians must undertake.

The redress recommendations initially stated that, “The Australian Government establish a single national redress scheme as the most effective structure for ensuring justice for survivors,” however the scheme has been left to the discretion of the states and territotires.

Whether the state governments are able to successfully implement the redress schemes remains to be seen but it is clear there are give and takes as to whether the Royal Commission and its recommendations provide enough pastoral care for victims of abuse.

And while the Royal Commission may have handed down its recommendations, signed off on the thousands of documents and State Governments begin to implement the Redress Scheme, the work has only just begun.

By Jasmin Abbott, Austin Andrews-Little, Abhranil Hazra There are 65.3 million refugees in the world; almost half of them are under the age of 18. Here is the real story of just one, who set out alone at the age of 14 to escape the horrors of genocide. Shahid Hussain fled his home in Pakistan […]

Bubble tea and crispy crepe: how the Taiwanese are shaping Sydney

By Tina Wu Among Sydney’s diverse cultural landscape is a community that’s seen but rarely heard – the people of Taiwan, an island country off the south-east coast of China that has been increasingly thrust into the international limelight due to ongoing political China-Taiwan tensions. From bubble milk tea to nutrient supplement companies, we investigate […]