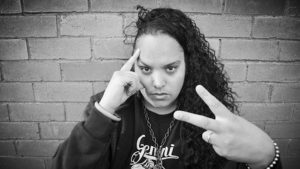 Coming from a rural community presents a myriad of hardships for many indigenous youths, however in the case of these two young artists, it added another dimension to their music.

They form part of the indigenous hip hop movement in Australia, which is beginning its push towards mainstream recognition.

In the case of Lady Lash, she feels as though her Aboriginal and Greek heritage has benefited her music.

“I’m a Kokatha woman with Greek Heritage. I’m a Fisherman’s Daughter who grew up on boats, eating from the sea and casting nets,” she said.

“I lived in/on the water as a child, so I feel a lot of my music is connected to water when I write/perform/record or visualise.

“My heritage enhances my art, this I’m grateful for.”

After moving to Melbourne in 2009 to pursue her career, she began to incorporate Jazz into her music, separating her from a typical hip hop artist.

She would release three studio albums by 2016, earning a nomination for ‘Best Aboriginal Act’ for The Age Music Victoria awards that year. After releasing her fourth album in 2017, titled ‘Therapy Tapes’, she aims at using her unique music to inspire fellow indigenous youths.

She said: “We (the indigenous community) have the ability to create and speak within our power. I’m true to my family and friends … my community comes with me on this journey.”

In an interview with The AU Review, Ziggy Ramo discussed how hip hop allowed him to discover his true identity and become proud of his indigenous culture.

“It took me 20 years to figure out who I was and to figure out my identity, growing up as an aboriginal child comes with many hardships,” he said.

“Music is really therapeutic for me, so it took me time to realise who I was and what I wanted to be, music is like a form of counselling for me.”

In 2017, Triple J named Ziggy Ramo their ‘artist to watch’. This form of mainstream recognition is helping this movement move out of rural communities and into the mainstream radio streams of Australia.

Koori Radio is a Redfern based Aboriginal radio station, which plays a pivotal role in developing the careers of indigenous artists. Gadigal Radio is one of their programs and their Administrator, Lilian Hines, believes the movement is beginning to gain traction.

She said: “It’s starting to take off with artists like Baker Boy, we also have a lot of new artists like Electric Fields and Nooky who have burst onto the scene.” 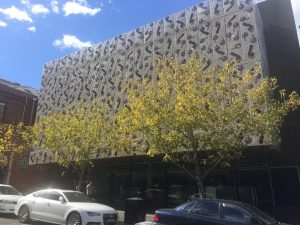 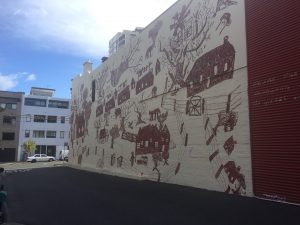 Hines has seen many troubled youths come through the radio station. Hip hop allows them to depict hardships that are common amongst the indigenous community.

“Hip hop and rap in general is about a struggle, you look all over the world, rappers in America and here all rap about their struggle,” she said.

“Most of the rappers I’ve come across talk about their own experiences, whether it was the struggle in their upbringing, their struggle with love or the struggle in streets where they came from.”

Hines highlights that there are factors that are preventing this movement from going mainstream.

“We need more resources, we have the Redfern Community Centre which runs great music workshops but that’s the only big one we have,” she said.

“Yabun was a huge success for us. It’s an indigenous music festival on the day known to indigenous people as Invasion Day but white Australians call it Australia day.

“We had big artists come and perform like Baker Boy, Electric Fields and Street Warriors … more events like that will really help boost the mainstream appeal of indigenous hip hop in Australia.”

With proper resources and the mainstream success of artists such as Lady Lash and Ziggy Ramo, Hines is optimistic about the future of indigenous hip hop.

“I think the most promising aspect of the indigenous hip hop scene is that most of our artists come from remote communities,” she said.

“So in five years’ time I can only see it continuing to growing both mainstream and in these remote communities.”

21 year old Sydney Male, Blake Sangster, is one of the many Aboriginal youths who are able to connect with the hardships portrayed in indigenous hip hop music.

“Being indigenous represents a lot of hardships, especially growing up … getting picked on for the colour of your skin and the struggle of making it are all problems I’ve encountered,” he said.

“Hearing these struggles in rap music allows me to make a connection with what I’m hearing and makes me proud to be indigenous.”

Sangster, like Hines, believes that indigenous hip hop will be eventually be heard regularly on mainstream radio stations across Australia.

He said: “I think we’re starting to make it, just look at Briggs, whose song ‘Here’ is the theme of the NRL.”

“It (Indigenous hip hop) is on Triple J regularly and it can only go up … I can’t wait for the day we start hearing it the 96.1, Nova and the more mainstream stations.”

However, he does acknowledge that there are certain factors preventing this from occurring.

“A lot of these rappers don’t generate enough income from their music to tour across Australia,” he said. 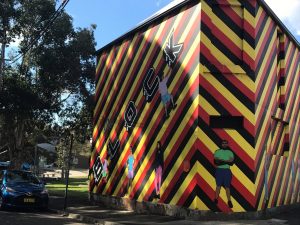 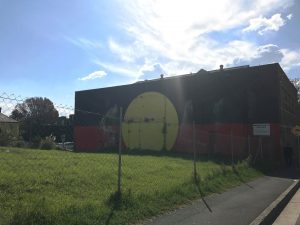 Hip hop music is empowering many indigenous communities across Australia, including ‘The Block’ in Redfern (Above). Photos taken by Adamo De Nigris.

Lady Lash acknowledges the struggle that many indigenous hip hop artists encounter, especially the founding members of the community. The success of contemporary artists like herself, is a testament to its progression in Australia.

“Most of Indigenous rap artists don’t get the shine they deserve in the music industry,” she said.

“It’s a bit better nowadays and I grew to know who were in the scene and still are by working alongside amazing minds out there.”

When asked about where she saw the indigenous hip hop community in five years, Lady Lash’s response was optimistic and emphatic.

She said: “I see it (indigenous hip hop) holding space within the mainstream, especially women like myself.”

By Demi Ball and April Maung When Samoan artist Angela Tiatia broke a forbidden cultural taboo, the reactions were mixed. She had revealed her malu, a traditional female tattoo, in an artwork entitled ‘Walking the Wall’. “It’s quite subversive to, and forbidden, to show that in public…especially (in) the traditional community, it’s considered a really […]

Sustainability is the New Black