Your daughter is graduating today after 5 long years of study. You’ve watched her grow and this is the most important moment of her life so far. The graduation is at 2 pm and you’re already running late because getting ready isn’t exactly easy. You get to the train station in a hurry and know there is a lift on the left. After an uneasy train ride, you go to get off the train at your stop but you’ve been forgotten about and the train keeps moving.  You’re in a wheelchair and no one thought you might need to get off.  You finally get off 4 stops too late when people can help. The graduation has already started. You wheel your chair to the foot of the steps and there’s no way for you to get up. You’re stranded.

This is almost exactly what happened to an infuriated and paraplegic Ben Falkiner who we met screaming down the phone “This shouldn’t have happened.” Ben was helped off the train two stops late by train passengers after the station employees had forgotten to come to his assistance. “If it wasn’t for those dudes standing next to you might have been on that train until Cronulla, or all day,” he said.

“I’ve had enough of the trains. I just wish that all would disappear. And same with buses.”

With 46% of stations still not accessible in New South Wales, this is not an uncommon narrative and has raised significant Human Rights issues as to why people with disabilities are able to access some areas of the state and not others.

Despite the fact that 19% of our population is classified as disabled overall access is limited and full of obstacles for users in NSW.

Inclusion Moves CEO and Paralympian Geoff Trappett told us “Everyday people with disability are coming up against public transport issues and that is not only stopping them as a person from fulfilling their life outcomes but purely from a societal standpoint it’s stopping society from growing and stopping people with disabilities from able to benefit from being in good employment options where they use public transport to get employment.”

The unemployment rate for persons with a disability was 10.5 percent in 2016, about twice that of those with no disability (4.6 percent). Adding public transport as another barrier is not only disheartening to this sector f the population but has significant economic and environmental impacts more far-reaching than most immediately think of.

“It’s putting more cars on the road it’s making sure that people with disability are staying as Second Class citizens.

So it’s not only having an individual impact on each individual person but a societal impact overall. And that’s a big picture lesson that I’m hoping governments will start to learn,” he said.

This exclusion has a significant impact on the morale of users of public transport with disabilities. Falkiner told us: “there are those times I just think no I just don’t want to. And then I just sit at home.”

Falkiner in a frustrated tone explained: “Sometimes like I can’t like I can’t get out at Redfern and museum. So if I go there I’m stuck literally,” which raises questions as to why this hasn’t been amended and indicates a wider social issue.

“It’s a system where we need to start looking at what the word public should mean. The word public in the phrase ‘public transport’ means, should by virtue of being public mean all people, no matter what their diverse needs, can have access to that public transport until we get to that point there will always be an exclusive nature to public transport which is not coming from a rights-based and strength-based approach,” said Trappett.

“We need to move to a framework and rights-based framework where people with disability have the right to be involved first and foremost, so everything that happens above that is a bonus but from a very baseline, people with a  disability should be able to access public transport.”

Kate Washington acting shadow minister for Disability and Ageing in NSW made it clear that the limited changes to public transport that “we have actually seen have been largely in the city more so than in the regions, and yeah it does le

The question on everyone’s lips who works directly with the issue wants to know where the funding is going. After continuing tax cuts to disability support and the NDIS in the last five federal budgets, advocates are increasingly frustrated in the lack of long-term solutions being implemented. 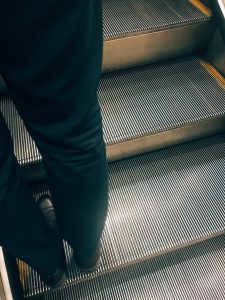 “If you are properly allocated funding in the long term not just over one financial year but in the long term there is absolutely no reason why you wouldn’t be able to release your upgrade plans here and try and network in one go. If you’re having to pick and choose stations on a year by year or month by month basis that gets upgraded, that shows that you have not taken a long-term approach to that to the funding mechanism that is behind the upgrade,” said Trappett.

Sam French from People With Disabilities Australia told us “We have a vision of a socially just, accessible, and inclusive community, in which the human rights, of all people with disability are recognised, respected and celebrated. The availability of incentives and subsidies play an important part in facilitating access to our public transport system for people with disability. However, there remains a number of problems with the current system.”

The recent turmoil over the Transition Mobility Allowance to the National Disability Insurance Scheme Bill 2016 was a reflection of the government’s attitudes to the issues French added. “People with disability face significant barriers to accessing transport, which can limit their ability to work, participate in education or other community 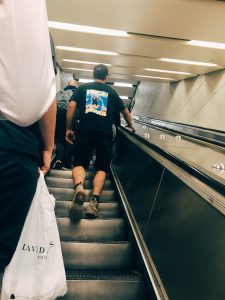 and economic activities. The current Mobility Allowance is already inadequate to cover the full cost of transport for many people. This Bill will make things much harder, with very little savings for the Government.”

The Bill planned to restrict access to essential transport funding to only those eligible for the National Disability Insurance Scheme (NDIS). There are approximately two million people with disability of working age, but only 460,000 will be transiting to the NDIS, The Bill has been to the Senate Community Affairs Committee, where people with a disability gave extensive evidence about the problems with the legislation, which was ignored by the Government.

“It’s a reflection of the way funding is structured for public transport. It is more a function of the way politics works than the way human rights works and that’s a great shame,” Trappett concluded.

Phoebe Anderson z5116842 and Olivia Seller z5115661   Ellie’s Short Row to Success When you first meet Ellie Larnach, you may think she’s your typical twenty-year-old student; hitting the books and going out with her friends. Although partly true, Ellie is a determined athlete who has achieved a successful breakthrough in surfboat rowing, pushing her […]

Women reclaim their bodies, 150 metres at a time

The importance of freedom of speech has been a key message of anti-abortion campaigners, however, Camperdown lawyer Kirsty Gan notes it’s important to consider the differences in Australia’s laws compared to America.   “I think it’s important to recall that Australia doesn’t have a US-style positive right to say whatever you like. Rather, the constitutional […]