From diagnosis to development and treatment, new technology is making waves in understanding autism

With the increasing prevalence of autism across the globe, technological devices like Virtual Reality and tablets are playing an incredibly important role in the diagnosis and development of kids with autism.

Adam Guastella, from the Brain and Mind Centre in Sydney, has been researching kids with Autism since 2008.

For Adam technology has the potential to help in the increasing early diagnosis of the condition. Utilising image technology to assist in the identifying of the subtle “biomarkers” of autism, he says researchers are faced with a new struggle. 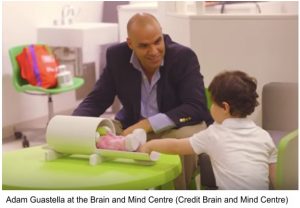 “So we’ve got these enormous amounts of videos, and we’re now looking at how we can code those videos to do really clever diagnosis.”

This increase in ability to diagnose is reflected by the Australian Bureau of Statics where the most recent data shows 164,000 Australians were diagnosed with autism as of 2015, a 41% increase from 115,400 in 2012.

Though Susan Bruck, a Research Officer at Autism Aspect Spectrum Australia, sees this increase in prevalence as only telling of our technological developments.

“Is [autisim] increasing? At first look yes it is but in fact what’s happened is that we are now better at identifying and diagnosing autism,” she says.

On a smaller scale, personal technological devices also provide a window for researchers like Adam Guastella into the lives of families of kids with autism.

“Families can collect and provide feedback that aren’t just research questionnaires, that might have more meaningful outcomes for their home-based life. Whether that’s by their smartphone or video footage that they’ve collected,” Adam says.

Technology can also help to improve the relationship between kids and their treatment, as Adam states “with young people you’re always trying to get away from psychology versus client relationships and into more fun and engaging activities.”

One such app, “ASD and Me” sees kids follow the adventures of Triple T the Turtle as he learns strategies for managing ASD.

n barriers and raises awareness for the condition.

Sophie Endersbee has been working with students with special needs for 5 years and says for kids with autism, helping to improve their tolerance for deviance is vital for educational development.

Sophie describes it as their ability to “tolerate things that deviate from the norm when things deviate from a set plan or deviate from routine… That can be the cause of a major meltdown.”

Apps like “ASD and Me” aim to help kids on the spectrum learn to deal with their surrounding environment using real-life examples in the game.

Adam highlights that autism is often shrouded in misunderstandings and that “a lot of misconceptions lead to that barrier.”

As Sophie highlights from her experience “The presumption for a lot of people is that they’re cold, don’t crave interaction, don’t want interaction.”

Hamish himself is on the spectrum, and he believes that apps like his can not only help kids with autism but also help those without the condition better understand the experience.

“Raising awareness about what autism is can definitely help people understand what is and therefore not mistreat that person.”

This awareness is incredibly important for people like Susan Bruck, who says “once you have families understanding, and you have parents, grandparents, aunties, uncles, teachers, early childhood workers and kindergarten teachers [understanding autism] they all start to identify what symptoms to look for.” 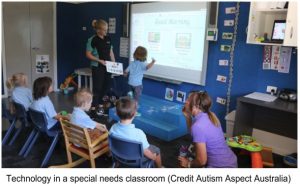 According to Sophie Endersbee apps like these can also be incredibly beneficial in the classroom.

“It also helps actually with fine hand motor skills.” She says, “they can be really uncoordinated, have poor balance, poor handwriting… allowing kids to type on a computer rather than write can mean that their motor skills aren’t holding back their literacy development.”

According to the ABS 83.7% of students with autism experience difficulty at their place of learning. With technology becoming increasingly involved in education working out how to best utilise could prove to be incredibly beneficial.

Sophie has been working with kids on the spectrum since 2013, where she started with a Sunrise program in Melbourne providing one on behaviour therapy for kids with autism.

“It’s amazing when you think a kid doesn’t understand something and they can construct a sentence and it can get quite specific.” Sophie explains, “‘I don’t like bananas’ for example and this is coming from a five-year-old who can’t talk but then you realise that they can actually read and they can string a sentence together and communicate that to you using an app.” 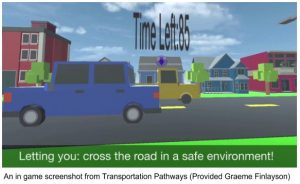 For Hamish, these technological developments can also help in the safety and wellbeing of kids on the spectrum in their everyday life.

“Transportation is the leading cause of death and injury in age groups 15-29 and people with Autism do struggle with crossing the road and I want this to change.”

The Australian Bureau of Statistics highlights this concern reporting that 48.5% of kids with autism require assistance with mobility and 13.6% need help with transportation.

to cross the road.

Now Hamish has 4 apps on both the Google Play and Apple Store, being used in 54 countries across the globe, he’s continuing to research how he can bring 3D animation into his apps.

(Above: Hamish provides a demonstration on how “Transport Pathways” works)

(Above: Piece to camera)

Graffiti. An Act of Vandalism or Artistic Form of Expression? How Street Art is Improving Sydney’s Culture. Graffiti has always been a dominant part of suburban culture in Sydney, receiving both positive and negative attitudes from the community who are concerned over the type of culture it perpetuates within the area. The Sydney Suburb […]