Live music once thrived in Australia, but there are now few live music venues left. They are constantly closing due to real estate values, lockout laws, and changing audience tastes. Venue closures make it hard for musicians to get their songs out to audiences, resulting in them distributing music online or even hosting house concerts.

Rock musician Dave Warner gleams with sweat on the stage in Wollongong, playing his song ‘Half time at the football’. Suddenly bouncers push forward, trying to stop him singing due to the explicit lyrics. But Dave’s surfer fans form a circle around him while throwing glasses at the bouncers, forcing them to retreat and hide in the coolroom while Dave finishes the song.

This energy and loyal fan base that comes with playing live was common in the 1970s when Dave was performing five nights a week. But this is now unheard of. 2GB reported just yesterday that the number of live music venues in Sydney fell by 61 per cent from 2003 to 2013.

Demolition of music venues has been ongoing in Australia. Brisbane Festival Hall closed in 2003 and Sydney Entertainment Centre in 2016. These closures have increased this year as Melbourne’s Ding Dong Lounge and Sydney’s The Basement closed, though it may be relocated to a smaller venue outside the city.

“Virtually all the venues have closed that I played in, and very few new ones have replaced them,” Dave Warner, lead singer of Dave Warner’s From the Suburbs said. “For example, in Perth I played at eight to 10 venues every month and there would’ve been up to 50 venues with live entertainment on, we’re talking the late 1970s now, and of those there’s only one left.”

Bass guitarist of renowned Australian rock band Skyhooks, Greg Macainsh, agrees that there has been a huge decline in live music venues.

“There’s not as much live music in hotels as there was in the 70’s and 80’s,” Greg said. “There were big hotels in every state but a lot of those closed down, almost none of the venues back when I started are still there.”

While some smaller venues have opened in recent years in Marrickville such as Lazybones Lounge in 2013 and Gasoline Pony in 2014, this is rare.

“A lot of the venues are really quite small because of the cost of renting, Greg said. “It’s just not viable to rent a big room if you can’t get lots of people to go to it. What’s happened in a lot of the inner city areas is that they have become residential apartments, people living right in the heart of the CBD and of course people don’t want that nightclub noise.”

Greg believes that as a result, live venues have moved into industrial areas. “There are no noise problems, there are no parking problems and venues can be a reasonably large size.”

“I think the overwhelming thing is that the price of real estate that pubs occupied has become so valuable now that owners simply close them to build apartments or offices because it is much easier to make a quick quid,” Dave said. “That influences the whole lifestyle young people have, so because there are fewer venues it becomes much less likely that young people will go out to hear a band, instead they might hear a DJ or just have drinks at the local place.”

20 year old bass guitarist of The Dissolutes, Nicky Wellard, agrees that people are not as interested in live music now.

“Most young people just go out to a club instead of going to a live gig,” Nicky said. “This is half the reason these venues can’t support themselves, the lack of people who are engaged at our age, and the fact that now they can’t get the late-comers in to help them.”

“I don’t think people see the value in music anymore, you see it everywhere,” Tony said. “I watched a YouTube of a guy talking about how to get rid of bugs in Mac computers and there in the background was music. It’s absurd! The guy’s telling you a message, it didn’t need music… it’s just kind of diminished it.”

Dave Warner also says pubs commonly rely on poker machines to bring in crowds. “Australia’s introduction of gambling casinos and things like that means pubs just use poker machines rather than live musicians to attract an audience.”

Greg Macainsh agrees that technology has caused live music to lose popularity. “I think there’s less demand for live music as a form of entertainment compared to earlier on where there wasn’t Facebook, there wasn’t computers, and people wanted something to do so they saw a band.”

He also believes 2014’s lockout laws have made people even less interested in live music. “People who want to go out and see lives bands are probably not going to want to do it at 7:30 at night, they tend to want to go out later,” Greg said.

The impact of lockout laws is proven through APRA ACMOS’ Live Music Office’s data which revealed a 40 per cent decrease in revenue in live music venues in CBD lockout areas from 2013 to 2015.

Oxford Art Factory is one live music venue that is thriving, but its general manager Mark Gerber agrees “closures can be blamed on the lockout laws”.

“Because of the lockout laws there’s been a steady decline of foot traffic and the general attendance of the night time economy,” Mark said. There’s no one left on the street after midnight so it’s a difficult thing, but we’re fortunate we’re on Oxford Street which is still regarded as an entertainment area.”

The closures of large live music venues badly affect musicians as many have to travel to play live.

“The amount of venues that bands are playing at is very limited, you do the same four or five venues throughout Sydney depending on how big your fan base is,” Nicky said. “Bands can’t play at a wide array of venues unless they travel up and down the coast and tour in different areas.” 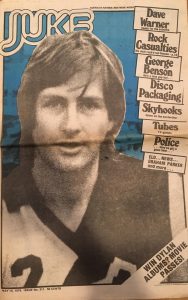 Fewer venues also make it much harder for musicians to earn money off live gigs.

“In the 1970s bands didn’t have to have record contracts to make a living off music, we used to play every night to crowds of 400 to 2000 people,” Dave said. “So obviously the closure of venues will affect bands being able to earn money, meaning that the industry will be smaller in the sense that people won’t be full time musicians, they will be part time musicians. There won’t be full time road crews or full time lighting people.”

However, Dave does not lament the death of music; he believes musicians can gain success online.

“The flip side of that in our time people had to wait to get the interest of a major record company,” Dave said. “Whereas nowadays there is a possibility that bands working from within their own lounge rooms can create music that can have an international audience by digital distribution. So there’s probably more of a chance that a band in Australia can be an international success, but then that’s a very much smaller percentage of people who can actually make a living out of it.”

“For example, Tash Sultana was busking and got noticed through Bandcamp and YouTube videos of her playing,” Nicky said. “Then Triple J got on to her and they start pushing her on the radio.”

An interesting new way musicians are spreading their music is through house concerts.

“I’ve seen it more and more about people doing gigs in their own homes which is good, but it’s still not like we experienced; going out and building an audience,” Tony said.

Greg agrees music has a future, but says nothing compares to performing live.

“Great Australian bands like ACDC, INXS and Powderfinger were all live bands that cut their teeth on playing in front of lots and lots of people,” Greg said. “You can’t fake that. You can’t create that in a rehearsal studio, it’s got to be in front of real human beings.”

For some interesting background information on this article watch my vodcast below.