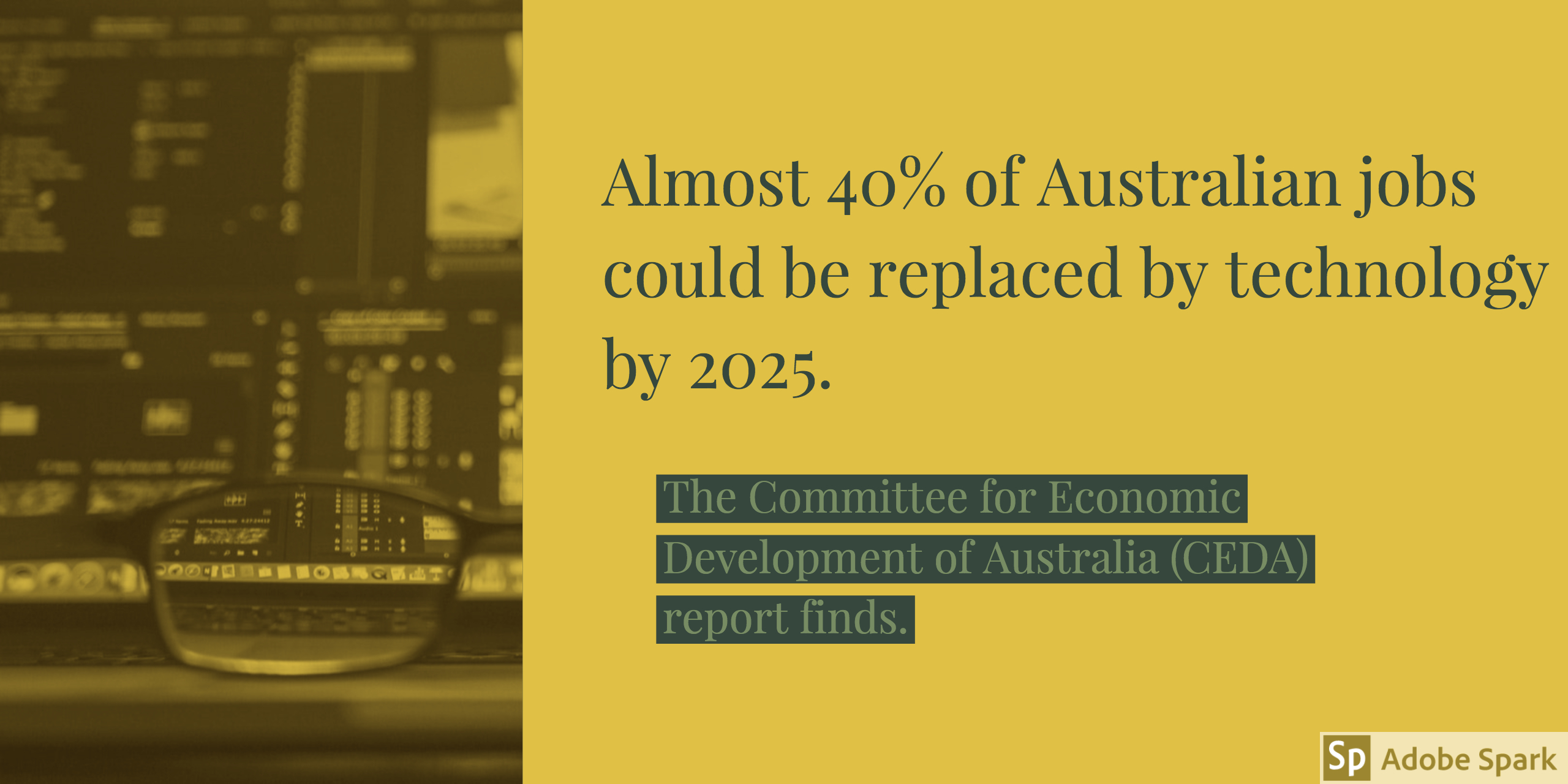 Almost 40% of Australian jobs are likely to be automated by the year 2025, according to a report by the Committee for Economic Development of Australia (CEDA). And contrary to popular belief; factory workers aren’t the only ones who will be suffering the consequences. So, what does this mean for the everyday Australian?

Calvin Holcomb had been working as a dedicated employee for St George Bank for 10 years, when in 2016 his job as a teller came to an abrupt end. Working long hours and weekends to support his family, at times his job was a struggle. But Calvin was good at it and he loved it. He had his future planned until he was forced to face one harsh truth; Calvin’s job was being replaced by an ATM.

“All my skills, capabilities and learnings that I had gained within my 10 years as a Teller was simply replaced by technology that learnt to do what I could in a matter of minutes,” said Calvin.

Calvin’s story is not an uncommon one, and according to a report by the Committee for Economic Development of Australia, 40% of jobs will be automated by the year 2025. Australian jobs are increasingly become more and more vulnerable to automation as a result of technology.

Just this week, Google announced the new Google Assistant. A software program capable of making phone calls and scheduling appointments which has been designed to sound just like a human. What does this kind of technology mean for the future? If a computer program can make and receive calls, and manage appointments, will receptionist jobs eventually become obsolete?

Studies show that professions such as receptionists, library technicians, legal secretaries are extremely likely to be computerised. Jobs are increasingly disappearing, and the only way for people to remained employed is to undergo a process of reskilling. 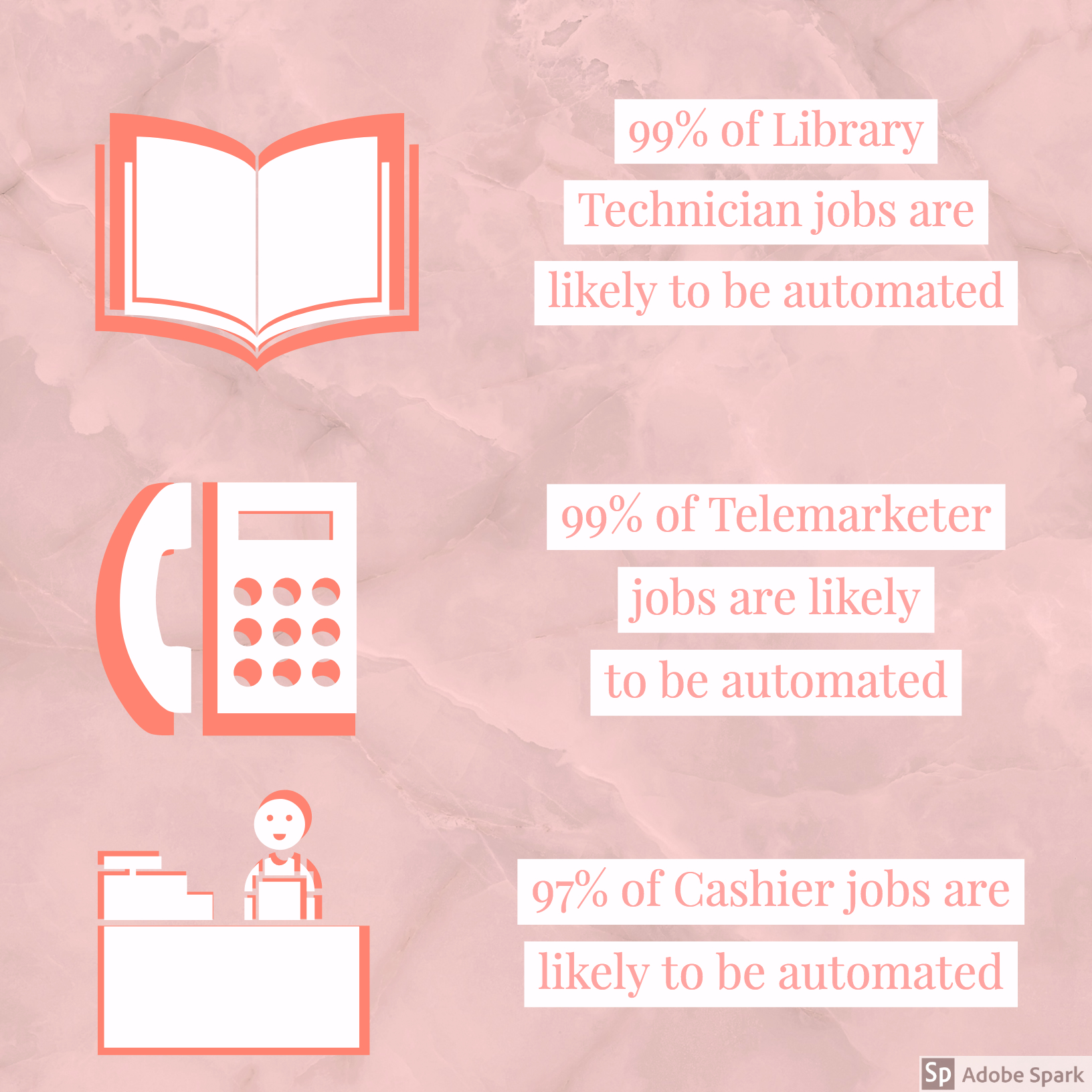 “It is clear we’re going through a period of disruption. There certainly will be some jobs that may be disappearing,” he said.

“I think there’s one thing for certain though, the new jobs that will occur that will require different skills. So we have to think at least prepare for that sort of change.”

But it appears Walsh may be alone in that thought, as many people brace themselves with the possibility of job cuts. 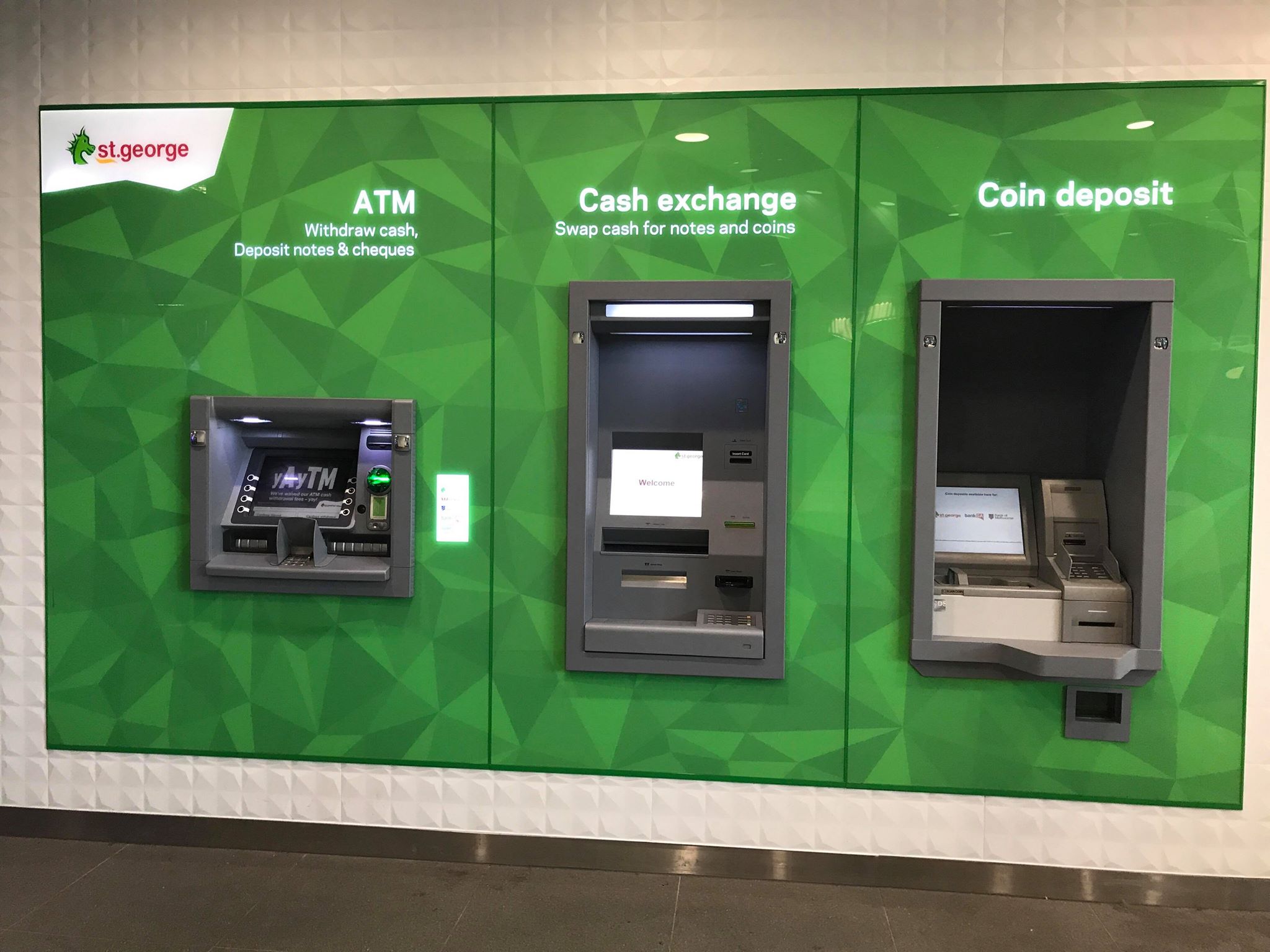 Pictured: the ATMs at St George branches that have completely replaced human tellers.

Banking is one of the largest industries already undergoing large amounts of automation. According to NAB chief executive Andrew Thorburn, there will be 6,000 job losses over the next three years.

“As transactions move to digital channels — and this is driven by our customers — we will need fewer people,” said Mr Thorburn.

Another recent report, by consulting firm McKinsey, suggested that 45 percent of the jobs people are currently employed in could easily be automated via the implementation of demonstrated technologies. 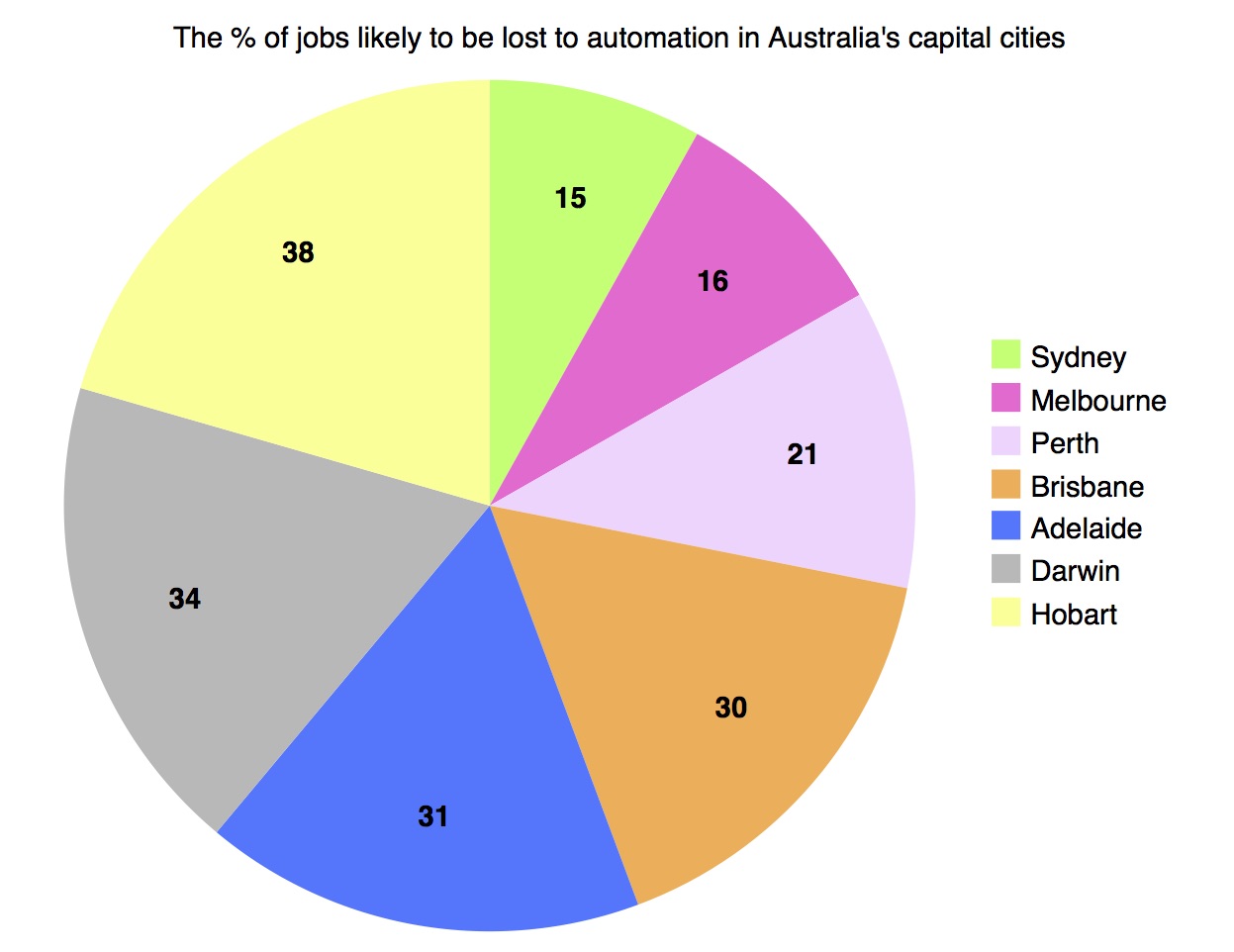 Fifteen percent of jobs in Sydney alone are estimated to be lost, with capital cities such as Hobart and Darwin expected to receive much bigger blows.

Technological advances may almost always create positive results, but what about the jobs that will become collateral damage?

and Michael A. Osborne, in their publication ‘The Future of Employment: How Susceptible are Jobs to Computerisation?’.

“Our model predicts that most workers in transportation and logistics occupations, together with the bulk of office and administrative support workers, and labour in production occupations, are at risk.”

Osborne and Frey argue that artificial intelligence and advanced robots are gaining enhanced senses and dexterity which has allowed them to perform a broader scope of manual tasks, and because of this the nature of work across all industries and occupations is likely to change.

“Our findings thus imply that as technology races ahead, low-skill workers will reallocate to tasks that are non-susceptible to computerisation – i.e., tasks requiring creative and social intelligence. For workers to win the race, however, they will have to acquire creative and social skills,” they said.

But Professor Toby Walsh isn’t concerned, and he doesn’t think you should be either.

“There will be some jobs that disappear. In many cases, those will be jobs that we shouldn’t be so sad about losing. They’re the four D’s: the dirty, the dull, the dangerous and the difficult. And we should be put at ease that computers and robots, are taking over those jobs. It used to be hundreds of people would die in the mines of Australia every year and now its 3 dozen, which is still too many, but nevertheless that’s been brought about by automation” said Walsh.

“The fact they’ve taken people out of a dangerous environment and we now have machinery doing that. Those are the sorts of positive outcomes but we just have to make sure that we don’t have an underclass of people who are under-employed and unemployable.”

“We prefer humans perhaps to be doctors and to be nurses because we prefer a human touch. We prefer to be sold things by human salespeople not by robots.” he said.

“If you’re someone who’s earning their living as a driver, that’s probably a job that’s going to disappear. Because it’s going to be faster, safer and cheaper to have robots do that.”

As Toby Walsh said, it’s hard to tell the pace of change. Yet while we can’t predict the future, we are living in a time of great disruption, innovation, and change. What the future holds will undoubtedly cause a shift in our understanding of the workforce and employment.

“I think we’re going through a period of great change.”

Older people less scared of driverless cars. Evan Williams, 11.05.2018 Street interviews have shown that while most Aussies don’t trust driverless cars, younger people are far more scared of the risks of advanced AI. Aussies say that the technology is not safe in its current form and that driverless cars are not advanced enough yet […]

Driverless cars are programmed to reduce human errors, with a special technology to monitor the car’s surroundings, guide the car and detect hazards. Street interviews show a divided public opinion,  most people believw driverless cars are created to follow road rules, hence it would significantly reduce fatal crashes through minimising human error. Others believed that […]

Driverless Cars: Will They Make A Positive Change?

Driverless cars are the new pieces of technology set to impress the world with their abilities. With reliable computer-automated responses to situations on the road, driverless cars aim to eradicate car accidents completely. However, how do ordinary drivers feel about the changes these new technologies will definitely make? Kevin Chen, aged 16, Campsie “[In driverless […]