The monetisation of YouTube and Instagram has facilitated the rise of a new entertainment industry largely driven by trends. Is this growing obsession with what’s trending generating a toxic environment for a younger generation to engage with, or is the social media industry more positive in practice than its negative reputation?

Childish Gambino, an American artist, released the music video for his new song ‘This is America’ five days ago as a critique on gun violence in the United States – five days later, it has attracted almost 83 million views as YouTube’s top trending video. ‘This is America’ has sparked a new social media trend, inspiring other posts in response that have attracted millions of views and brought the debate about gun violence back to the news.

‘This is America’ is the internet’s latest social media trend, but past trends have included the ‘#metoo’ women’s rights Twitter campaign and Instagram’s ‘squiggle brows’. According to University of New South Wales’ lecturer Don Sillence, the phenomenon of trends and the social media that houses them will be key to future social changes.

“Building these kinds of networks is essential for the kinds of widespread social changes that are likely to be on their way,” he says.

Social media has transformed the definition of the word ‘trend’, which according to the Oxford English Online Dictionary can now be used as a verb to describe something with lots of posts in little time.

The hashtag ‘metoo’ first emerged in 2006 when activist Tarana Burke encouraged other social media users to share it alongside their stories of sexual abuse. It didn’t gain widespread traction, until actress Alyssa Milano used it in 2017. “If you’ve been sexually harassed or assaulted write ‘me too’ as a reply to this tweet,” she wrote.

‘#MeToo’ may have caught on a decade late, but when it did it prompted countless accusations of sexual abuse against renowned Hollywood figures including Harvey Weinstein, who lost jobs, titles and credibility. This trend has been labelled ‘the Weinstein Effect’.

“Those young girls are going to be able to change the world when they come into their own, patriarchy’s on some pretty shaky last legs,” Sillence says.

The young girls Sillence is talking about are those that are often the main demographic of social media influencers on YouTube and Instagram, such as Zoe Sugg (Zoella) and Jake Paul. Sugg has almost 13 million YouTube subscribers on her main channel, and almost five million on her vlog channel. Paul has almost 15 million in comparison.

Social movements are not the only from of trends to be found on social media. On YouTube and Instagram, beauty trends are everywhere, and those with a lot of followers can often profit. It is an online market that Sillence is wary of.

“Our 20th-century inheritance of consumerism/consumption is doing us no favours in the 21st century,” Sillence says.

“Turning ourselves into products is encouraging everyone to see themselves and everyone else as ultimately replaceable, disposable, ultimately, without substance, trash. This level of exposure is setting impossible standards of self-perception.”

“Social media influencers are just the symptom of the disease we’re trying to catch.”

“I started off doing make-up videos that every teenage girl did, I wanted to be like one of the like, all the pretty Instagram people,” Foskett says.

The ‘Standard Sandi’ YouTube channel may not have hundreds of thousands of subscribers, but that doesn’t mean Sandi’s videos go unseen. Her most viewed video, ‘Aussie Reacts to Indian Movie Trailers // Bahubali 2’, has been viewed over 85thousand times since it was posted in March last year. Her following is small, but her reach isn’t.

“I have influence, you know, in terms of what people apparently think of Australians,” Foskett says. Much

of her content is based around this premise, including a series videos where she reacts to Indian culture.

Foskett has made several YouTube videos based on trying new beauty product releases, which are a genre known as beauty reviews.

“I kinda subscribe that whole idea of ‘trying’ stuff’.”

“You can kind of see what other people are doing and then you try it out and it works for yourself.” 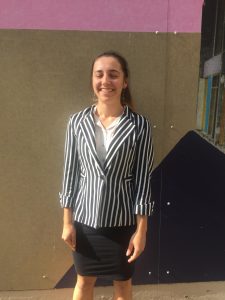 Foskett may be a trend enthusiast, but she recognises that some trends can promote behaviour that may be unsafe and dangerous. A viral video circulated in 2016 that featured YouTuber Lilly Wurst and her friend Sabrina trying the world’s hottest pepper, the Carolina Reaper. Both had bad reactions to the pepper, with Sabrina suffering an asthma attack that required the use of an oxygen machine to recover.

“Some trends obviously aren’t good trends, some people do stupid things like climbing buildings, hold on with one hand and in that case I guess trends aren’t great,” Foskett says.

“You want to make sure the values you are putting on to the people that follow you are good values.”

20-year-old Leigh Matthews is another marketing student that has a fascination with trends. “If I find a trend that I like and want to participate in, it is because I find it interesting and want to adopt it into my life,” she says.

“After that I don’t really think much of it as a ‘trend’, but just part of my daily life.”

Matttews doesn’t aspire to be a social media influencer, but she does wish to work in the industry and be involved in marketing, public relations, advertising and press. She understands the social media industry well.

“With increased social media presence in today’s society it allows influencers to express their thoughts and opinions to an ever-growing audience, tailoring trends to even benefit themselves,” she says.

“These influencers have the ability to influence the thoughts of their viewers, who may be more susceptible to such trends.”

“Media influencers play a major role in how these trends can be portrayed and how their audience may perceive them.”

The road to #enough

By Rizna Mutmainah z5142434 and Kate Quinn z5114887 Striding into the cafe with her cream-coloured clothes, Gucci shoes, pixie haircut and a smile, businesswoman Suzy Jacobs hopes to make a change. Her eyes light up as she shares her ambitions of starting a new feminist movement and hashtag called #Enough. The November project is in collaboration […]

One hundred years on, how much further do female lawyers have to go?

By Madeleine Thomas Australia is striving for greater gender equality in all sectors, but the legal industry is still struggling to close the pay gap and put women in high places. This year marks the centenary of the Women’s Legal Status Act of 1918, and while numbers of female solicitors in our community are […]