This November marks 100 years since the NSW Women’s Legal Status Act was passed, yet women are still largely outnumbered in the legal industry.

“We’ve come a long way and the trailblazing women who were the early frontier in this world, they were very clever and ambitious in their desire to qualify as lawyers,” Founder of First 100 Years Australia, Rachel Scanlon said.

“Even after the law was passed, it was a very long time before there were women in any great number, one of the big hurdles to that, was that, in order to work, you had to get work”.

Rachel Scanlon is the leader of the First 100 Years project in Australia, which recognises and celebrates the 100-year mark of women in the legal industry and documents the history of women in law. To mark the occasion, they will be producing a photo mosaic of a woman in history who will be celebrated, from a series of photos current women in law.

“It will enable a lot of people to be engaged and actually see their photo as one of the pixels in the mosaic,” Rachel said.

The First 100 Years will also be holding a drinks networking event at NSW Parliament House on the 26th of November, where they will be awarding a scholarship to one woman looking to pursue a career in law.

Victoria was the first state to pass the Act in 1903, well before any other state and territory, although have not been successful in achieving equality.

Elena Tsalaidis, from the Victorian Women’s Lawyers Association (VWL) said: “the problems have become harder to identify so legally, women, working women, have legally the same rights as men, you know you can’t be discriminated against, you have to pay someone for their work, but we know in reality that’s not what happens”.

The Gender pay gap is an issue that most industries in the country deal with, in particular the legal sector with a gap of 36.5 percent. The VWL has worked towards eliminating pay secrecy in the industry. After appearing before the Education and Employment Legislation Committee, they have achieved pay transparency in several law firms including Australia’s leading Maurice Blackburn Lawyers. 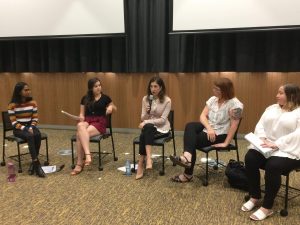 “There is a clause that says, you’re not entitled to discuss your remuneration package with anyone. And that creates the culture of silence because people don’t know what their colleagues are getting paid,” Elena said.

“We were very for pay transparency, because we think it enables women to better negotiate their pay.”

Running over 30 events a year, the VWL touch on everything from the gender pay gap, to culturally and linguistically diverse women, homelessness and sexual harassment, in order to work towards equality. 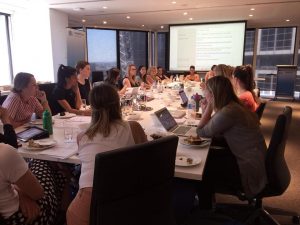 “I know a lot of law firms who are our sponsors get invested in our activities and run their own things in house, so I think it is on the uptake, of course there can always be more done,” Elena said.

2017 saw Australia’s first female Chief Justice of the High Court, Susan Kiefel, be sworn in, after 40 years in the legal sector.

Women are too often denied the same opportunities as men, particularly on the basis of child bearing responsibilities. Women face the challenge of choosing to take a period off work to have a family at the cost of impacting their career.

“Some women who have been appointed to the bench, you may or may not know, I don’t know, from their public profile, they may not have children. They’ve probably chosen not to have a family, to pursue law. Men don’t really need to make that choice,” Ting Lim from the NSW Bar Association said.

Barristers work as sole practitioners, relying on a sum of work for a respectable income. Female barristers endure an income barrier when they decide to take maternity leave.

“In employment, most places pay for your maternity leave and you get a salary over that time, whereas at the Bar if you don’t work, you don’t get an income,” Ting said.

“In terms of the type of work as well, the barristers’ work is predominantly in the courtroom. That sometimes impacts on the ability for flexibility in work.”

Working your way up the ladder faces all the usual barriers. For women wishing to step into leadership roles “flexible parental leave policies, like not having the stigma on child rearing responsibilities, or looking after elderly parents for example, so that we’ve got equality if men want to work flexibly, if women want to work flexibly, there is no career punishment for that, in terms of promotion,” Elena Tsalanidis said. 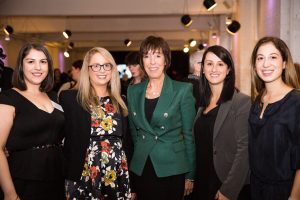 Current estimates suggest that we are not going to have pay equality for another 220 years. “I think we’ve been fighting for it for a long time and we know it’s doable, equality, financial equality should be not too far away if we keep pushing, so I think what this involves is a real educational shift,” said Elena.

With 63 percent of students graduating from law school being females, the legal industry should be utilizing these women.

For the industry to see a change in proportion, law firms participate in “leadership training for women, particularly encouraging women to be more assertive and promote themselves, because we know that this is one of the more subtle things that women do through their nature, that sometimes can unfortunately hamper them,” Rachel Scanlon said.

For the first time in a century, the legal industry has 50 percent of women solicitors, with 15 thousand of the 30 thousand solicitors in NSW being female.

As women gradually make their way up the legal sector, an industry without them would “be really boring,” Ting Lim said.

Vox Populi: Driverless Cars Hotly debated in tech-corners and headlining geek media, driverless cars and the views surrounding their transition to day-to-day vehicles is facing more and more prominent exposure. Recently revealed to the public, Tesla’s unfortunate incident with one of the test cars saw mass opinion sway in favour of them being seen as […]

Survivors are now heard and recognised for the abuse they went through as a vulnerable child, and are able to seek comfort from the other survivors’ stories. By Kirsta Cheung Children were taken to Sunday morning church services by devoted religious parents who’d entrust priests to care for them, during the 1950s. Father John Perez […]