A frustrated Ben Falkiner paces up and down Sydney’s Como train station talking on his mobile. “This should never have happened!” he says to his mother on the other end, “I can’t believe they forgot”. Ben was supposed to be off the

train two stops ago, but when he arrived at his destination, the station employees had forgotten to come to his assistance.

Two stops away from home and a sizeable flight of stairs preventing him from leaving his un-intended destination, Ben Falkiner is stuck, because Ben Falkiner is in a wheelchair.

The experience has left him dissatisfied with the New South Wales train service and staff, and longing for a more able body, not so he could remove himself from the train, no, Ben has other priorities.

“What I wouldn’t give for a working pair of legs so I could give them a good kick up the arse!” He said.

The NSW train system has left many like Ben Falkiner wanting a more accessible service for people with disabilities, but the state of train stations has left many feeling locked out of the transport network.

Paralympian and founder of ‘Inclusion Moves’ Geoff Trappett agrees that people with disabilities are treated as “second class citizens” when it comes to public transport Australia wide. This is because the scattered levels of development in stations prevents the disabled population from being certain that when they get on a train, they’ll be able to get off again.

This creates a system that requires the disabled to do much more research into day to day activities than the able bodied population.

“People with disabilities at the moment do not have that surety that they can get off at a station and know it will be accessible,” he said.

“When a person with a disability needs to go through more simply to get the same outcome, that’s starting to tread quite closely to the definition of discrimination.”

This is a very prominent issue in NSW, a state where only 167 of our 307 train stations are fully accessible. 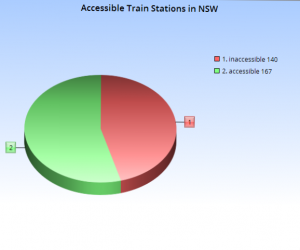 ember for Port Stephens, Ms Kate Washington, says that the “inadequacies of public transport” in rural and regional Australia also contribute to the “social isolation” of people with disabilities.

The intercity train fleet from Newcastle to Sydney is designed in a way that prohibits people in wheelchairs from accessing the seated area of the train, meaning they have to remain in the vestibule for the duration of the trip.

“It’s not an air conditioned space, so it’s either hot or cold,” Ms Washington said, remarking that the conditions of such a journey are “awful”.

Councillor David Belcher, who is wheelchair bound, was forced to endure these conditions for 3 hours while on a train from Newcastle to Sydney. Mr Belcher was on his way to a disability inclusion conference on transport.

Data on when, and which stations will be upgraded is either non-existent, or being released to the public on a station by station basis. This is an issue that contributes to the exclusionary nature of Australia’s train stations.

overnments, which is part of the reason that people with disabilities feel isolated from the network.

“If you’re having to pick and choose stations on a year by year or month by month basis that get upgraded, that shows that you have not taken a long term approach to the funding mechanism that is behind the upgrade,” he said.

Ms Kate Washington has hopes that the government phasing out old trains will rectify some of these issues, even though it is happening at a very slow pace.

“The older [trains] are being replaced with new trains, and that should address the problem, but it’s just happening so slowly,” she said.

However, Geoff Trappett is determined that state governments are not committed to commissioning new and accessible trains because the fleet of Queensland NGR (New Generation Rollingstock) trains that have been hitting the tracks this year have been labelled as a breach of human rights by the Australian Human Rights Commission in terms of accessibility.

“A new model of trains is being put on the tracks that were deemed by the Australian Human Rights Commission to be non-compliant with disability standards for public transport,” he said.

“That sends a signal, to not only the Queensland Government but all governments within Australia that they need to pull their socks up when it comes to the design of modes of transport.”

The Minister for Transport, Mr Andrew Constance, could not be reached for comment on what this means for the Governments approach to accessibility.

The process of which stations get upgraded and which do not has left NSW specifically with a series of developed platforms in a seemingly random pattern. This is an issue that many feel demonstrates a lack of prioritisation in making all stations across the board accessible.

nd a footbridge last year. Some have asked why Jannali received these upgrades when the station was already accessible with ramps and Jannali’s adjacent stop, Como, is completely inaccessible.

These upgrades are also questionable when down the line, New South Wales’ seventh busiest station, Redfern, is only accessible via stairs on 11 of its 12 platforms.

The member for Miranda (the area including both Como and Jannali), Ms Eleni Petinos said that the decision surrounding which stations get upgraded is one based on “evidence-based criteria, including current and future patronage.”

Ms Kate Washington disagrees, saying that politicians are more concerned with developing the stations that are more likely to win them elections rather than for the creation of a fully accessible network.

ope that they might retain seats in the upcoming election instead of actually delivering for all the people of NSW.”

Geoff Trappett agrees with this, saying that the development of stations is “more of a function of the way politics works than the way human rights works, and that’s a great shame.”

Geoff thinks that the “evidence based criteria” used by governments to upgrade stations is inadequate, as it does not show how many disabled people require the station, as many feel too excluded to use the system.

“You need to build it for there to be that groundswell of people to show up and get involved and use it for the accessibility,” he said.

People want a lot from their governments, but people like Ben Falkiner just want to be able to get home as easily as everyone else. 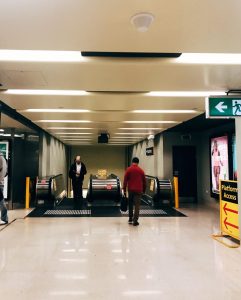 Not just the newsletter guy: A Sydney artist’s double life

BY EMMA SOWTER AND LUBNA SHERIEFF     Though he has created over sixty plays, performances and dance works featured across Australia, won the Woodford Poetry Slam in 2011, qualified for the Australian Nimbin Poetry World Cup in 2011 and 2012, and released three EPs of storytelling, spoken word and music, most only recognise Tom […]

Indigenous and proud of it