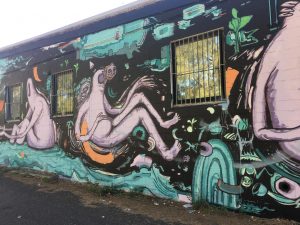 Sydney’s streetscape has become a platform to raise both societal and political issues. Street art’s changing public perceptions are challenging the idea of whether is degrades the reputation of communities or whether it has created a culture within communities.
Street art has been around for years, and issues around street art have been prevalent around areas in New South Wales, particularlyin the inner west of Sydney.
However, the changing perceptions and views on street art, has raised questions of whether it cultivates a culture in communities or whether it degrades community image.
“Street art…is artistic and gives back to society rather than defacing it. It can be creative and can represent the area,” resident from Balmain says.
Mariko Konno who is a female, freelance artist has done several street art works. She advocates for street artists around New South Wales through her Facebook page, Mariko Konno Art.
She touches on the changing landscape of street art and how it can make a “political statement” or express individual’s emotions.
“The inner west and all that…it’s more accepted because…of the Bohemian types have obviously lived there for a long time, and they just kind of want to get away and…be able to express themselves freely, so the community’s really supportive of that,” she says.
“Street art, it starts to become more…contemporary paintings and people just expressing their own emotions and their own talents to the world, so people can see it, and also just express themselves,” she continues.
Street art has embedded a culture within different areas and communities around Sydney through the messages expressed in these works by the artists. 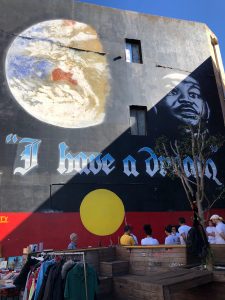 “In Surry Hills…the Darlinghurst area there is a really great piece right now…commemorating a woman who was raped in…this ally way,” she says. “…it was this beautiful pink cursive installation that went around the corner of the building and I thought that was really sensitive and lovely.”

“It makes you look at the environment in a different way and it makes your day go a little bit slower, especially in the city,” she continues.

For a long time, street art was considered graffiti or vandalism. However, it has transformed from a criminal act to an art form over the years it has been around, and many of the publics agree with.
“The distinction between street art and graffitiis generally pretty clear…sometimes hard to tell without greater context,” says Lynette Yang, a St Ives local. “Certain mediums – like spray paint are associated more with graffiti than with the generic understanding of ‘art’, but there are countless cases in which these graffiti become art.” 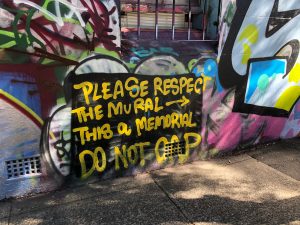 Segal says, “I think something like tagging a person’s name is unarguably graffiti … even the more decorative types of tagging…I think the technical skill is impressive and in terms of murals…murals are incredible…I do consider them art.”

“There’s a difference depending on who the person is and their intention, because people probably graffiti for the thrill of it or to leave a mark, but street artist often have a social message,” Vanessa Wong from the lower North Shore says.
James Tugwell, 20, from Balmain says, “I always associate graffiti with messy, unprofessional, illegal…street art on the other hand is artistic and gives back to society rather than defacing it. It can be creative and represent the area.”
Melbourne is best known for its street art. Sydney’s streetscape is changing with street art that is starting to shape the culture of different communities rather than degrading it. Fraser Coast Regional Council have recognised the benefits of street art to “democratises art appreciation in Australia.”
Adam, 32, Newtown resident says, “There’s a big history of political street art in Newtown…I think it’s a reflection of the culture in the area.”

“Light rail bridge at Annandale, almost 30 metres long the bridge depicts iconic symbols of the area that became ingrained within the identity of the area,” says Tugwell. He continues, “I never carried any conviction…and never took action beyond allowing my mind a few brief moments to think about it [street art that provoked him].”

Due to the transforming perceptions and views on street art there have been many cases where street art has been encouraged.

Actions taken by council and property owners with commissioning murals and networking with artists have shown cultural change within the street art landscape around Sydney. The Inner West Council’s ‘Perfect Match’ program is an example of funding street artwork. 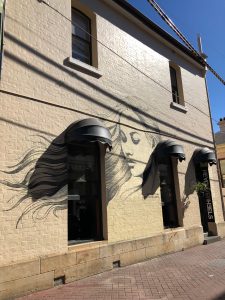 “People are wanting to do street art as a means of giving back to the community and creating or expressing an identity or even provoking through there are ways to do that which aren’t illegal and don’t impose other people,” says Tugwell.

“In order for street artists to produce their workwithout risk of it being over or taken down, they have to get permission from authorities like local councils, and it would be pretty rare for people in the government to sanction work that is offensive, unsightly or controversial,” says Vanessa Wong.

She continues, “If street art is too offensive, it can get taken down pretty easily because it’s in a public space and the public can’t “opt out” of seeing it because it’s right there for everyone to see…But if an artwork in an art gallery is offensive, it’s rare that it would get removed because the people that see it have to actively make a choice to see the work by visiting that gallery and buying a ticket.”

Street art “caters for the widest variety of people because it is the most accessible form of art.” And as it is for the public view, the publicity and attention it receives reflects the culture of the area and its community.

A COMMUNITY OF PRIVILEGE: THE SECRET WORLD OF INTERVARSITY DEBATING

University societies around Australia are dedicated to debating in national and international tournaments but these societies have acknowledged a problem with diversity in their community. For most people, debating is a high school extra-curricular activity. In reality, it’s an elite sport in universities all over Australia that takes students as far as Cape Town for […]

Driverless cars: Vehicles of the future?

Written by: Tania Tan Until self-driving vehicles are fully on the market in Australia, questions regarding the safety of such vehicles for drivers and pedestrians alike will continue to persist. Opinions on driverless cars are relatively positive as driverless cars are expected to be powered by smart technology that may keep the roads safer. “I […]