Picture this: wearing an outfit made from plastic drink bottles, while walking around your house that was partly made from broken glass and old smart phones.

While it may seem like a far-fetched scenario, technologies that treat our trash as treasure have gained more support in the wake of Australia’s current ‘recycling crisis’.

In a recent world-first, “micro-factories” designed by UNSW’s Sustainable Materials and Recyclable Technology Centre (‘SMaRT’) have transformed household and commercial waste back into ‘raw materials’.

Designed to be flexible, the micro-factories can transform mixtures of waste glass, plastics, metals, timber and textiles into materials and products used by industry, such as building panels and beams.

“Micro-factories [are] all about relying on local waste resources, which means you don’t have to depend on importing expensive raw materials from elsewhere [or] shipping your waste,” said Professor Veena Sahajwalla, director of the SMaRT centre.

“[At] first, I asked everyone to bring in their takeaway containers from home… and we were using that as our feedstock.”

Measuring just 50 square metres, the machines can be added into existing factories, allowing manufacturers to recycle their waste onsite into raw materials.

While various manufacturers have already licensed the technology, Professor Sahajwalla suggested micro-factories could also operate on a smaller scale, helping community groups deal with their own waste and make products for local businesses.

“You could be in a really remote community in the middle of Australia, and you could be making building products… for housing projects locally in their community right there,” Professor Sahajwalla said.

“Say you manufactured more than you needed, you could be selling it as well.”

Recently, the micro-factories have been tackling notoriously difficult e-waste, breaking it down into valuable metals such as copper and gold, and plastic filaments to be used as ‘ink’ in 3D printing.

For Professor Sahajwalla, part of the reason behind the current “recycling crisis” is that Australian governments and public view recyclables as a “burden that has to be dealt with”, rather than recognising their potential worth.

“The one thing we have in common is generally a lot of waste, no matter where you are in the world. There’s huge opportunity there,” she said.

“It’s really all about creating products that are built on the back of materials that we throw away, recognising that [they] fundamentally still have their inherent properties.

“A piece of broken glass… might be… no longer useful as a glass bottle. But it still can be useful as another product, that comes to life in a completely different way.”

Yet the micro-factory is just one of the latest technologies in a wider social movement towards ‘circular economies’.

According to the World Economic Forum, circular economy models involve “eliminating waste from the industrial chain by reusing materials to the maximum extent possible”.

In other words, the approach aims to keep materials circulating through the economy, instead of going to landfill after a single use.

In a report published in 2014, the WEF estimated more than US$1 trillion a year could be saved globally if companies adopted circular economy tactics, as the availability of recycled materials would drive down costs of manufacturing.

The push for businesses, governments and communities to embrace a more circular model of waste management and manufacturing has strengthened in the wake of the Australian “recycling crisis”.

The crisis has followed an announcement that China would no longer take low-grade recycling waste, meaning 99% of Australian recyclables formerly exported to China were effectively banned.

In 2016-2017, Australia sent approximately one third of all our paper, cardboard and plastics collected from kerbside recycling programs to China, according to a report prepared by Blue Environment for the government in May.

But with the right technology and sufficient funding, even waste currently considered to be “non-recyclable” can contribute valuable resources, according to recycling initiative TerraCycle.

Aiming to “eliminate the idea of waste”, the international initiative has diverted 4 billion pieces of “non-recyclable waste” from landfill, including toothbrushes, cosmetics, and chip packets donated by 80 million participants.

“Things like coffee capsules, yogurt pouches and cosmetics, they have a more complex mixed plastic composition. And if you were to on-sell the recycled by-product… it wouldn’t be enough to cover how much it costs to collect and recycle.

“A lot of people think that they must be made of a plastic that simply cannot be recycled, but in truth everything can be recycled.”

Sponsored by big-name brands such as Colgate and Nescafé, TerraCycle rents out local recycling facilities where they shred, wash and melt waste plastics donated by the public into pellets, which can be used as “sustainable raw materials”.

According to Ms Keen, the manufacture-ready plastic pellets have been used to make planter boxes, picnic tables, watering cans and frisbees.

The ‘expensiveness’ of their recycled fabrics in comparison to their competitors depends on the price of petrol – from which polyester is normally made, a spokeswoman for the company said.

“Expensive is relative – it would depend at which price point you compare [recycled] RPET yarn with normal poly yarn,” the spokeswoman said.

In a survey of 80 people conducted for this story, four out of every five people said they would be willing to pay more for a product made of entirely recycled materials.

But given an example of a t-shirt made from recycled materials, more than two-thirds of people said they would only be willing to spend $0-20 more than on a non-recycled t-shirt. 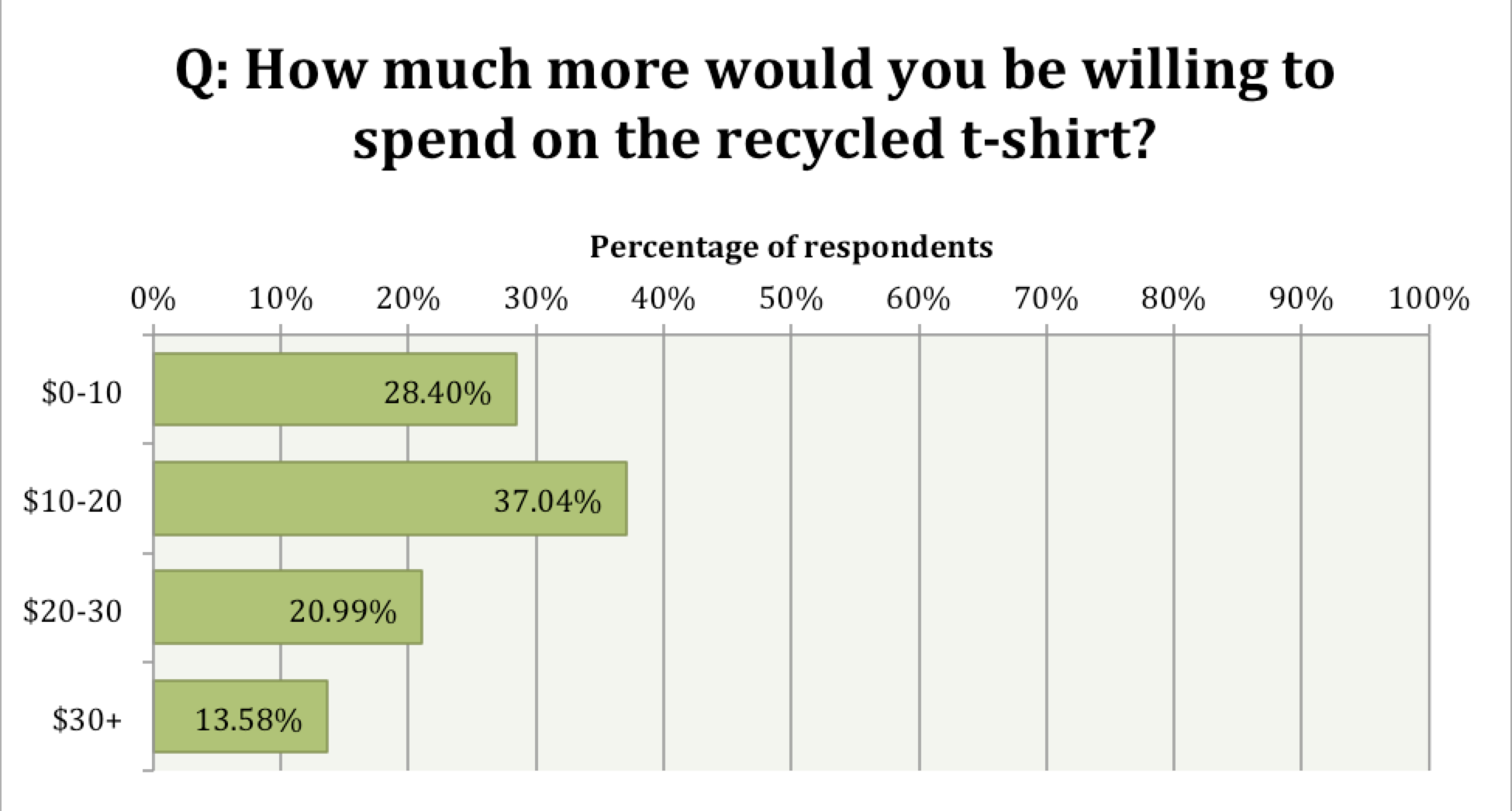 It is a phenomenon often experienced by companies using recycled materials, as there is limited demand for such products, according to Elsa Dominish, senior research consultant at the University of Technology Sydney.

“A lot of companies face the issue [that] they don’t have a lot of people who want to buy [recycled] products yet,” said Ms Dominish.

“[Recycled] textiles… might only supplement a small amount of what people are buying, instead of new textiles.

“So a recycler might want to invest in new processing facilities but they need to know they can supply a big enough [market].”

While it is “generally more expensive to use recycled” materials in manufacturing, Ms Dominish sees circular manufacturing schemes as a “good part” of waste management.

“It’s still really good. And maybe these Australian technologies can be exported to new places, and scale up,” she said.

“We’re not accounting for the full environmental cost for using virgin plastics.

“If we took that into account, the world would be a different place.”

Autoimmunity: The Paradox of Disease

DANA PENDRICK   The story of Selena Gomez’s battle with lupus disease has resurfaced in recent news due to her latest appearance in Australia.   Last year, the young American popstar disappeared from the public eye to undergo chemotherapy and a kidney transplant as a result of the disease.   Lupus, like the other 100 […]

Saving a language from extinction

60 years ago, the Bengali Language Movement reached a bloody end with the independence of a new nation, Bangladesh – along with the recognition of its ancient language, Bangla. But in this globalized era, the Bangla language is increasingly becoming forgotten by its own people. One Sydney school is doing its best to keep the language […]