By embracing and exposing their heritage, indigenous entrepreneurs are progressively reaching new heights in the business sector despite a lack of funding from the Australian government.

In a climate of increasing and widespread acceptance of their past, indigenous Australian entrepreneurs are prospering without sacrificing their cultural traditions.

For entrepreneur Josie Alec, gaining knowledge from her Mother and seeing her natural indigenous remedies effectively treat her family and friends was all the motivation she needed to start her own business.

“A friend came over with her little girl who had been bitten from head to toe by mosquitoes. She was only a baby, 10 months old or so, I gave her some of my baby oil and 2 hours later my friend texted me saying the stuff is amazing, the baby has stopped scratching, she’s settled down and she has gone to sleep finally. Within 2 days her bites were gone…so that was my inspiration to go out and make formulas,” she says.

However, Alec, a teacher by trade, received no assistance from government programs when starting her own business.

“It’s like they (government programs) are a fallacy. They are there in words but they don’t exist when you actually try and get them. I looked for funding, I have always been a ‘ticker box’ for people, they say yes they’ll help you but they never put their money where their mouth is,” she says.

Alec was taken from her mother as part of Australia’s Stolen Generation and was raised with a white family until she reunited with her biological Mother many years later in Karatha in Western Australia who inspired her to start formulating products.

“My mum was a traditional healer and one of the last…she healed everybody. I began formulating just from the knowledge my Mum had given me over a number of years,” she says.

This sparked her entrepreneurial journey where she started selling her bush remedies through Facebook and locally while still teaching. 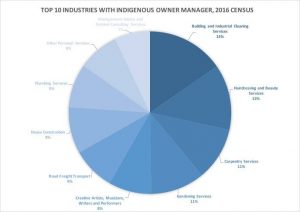 “I was making these creams and other remedies and I had started selling them and it got to a point where I just had to stop because I had too many people wanting to buy, the demand was just too much,” she admits.

At the end of 2015, Alec quit her teaching job to start her business, ‘The Jummi Factory,’ with the intention to heal others and empower her people through producing a range of natural creams, washes, balms and oils from indigenous healing plants. As she had no real business experience, she participated in an 8-week pilot indigenous business accelerator program last year run by ‘Indigenous Business Australia’ (IBA). While crafting her products, Alec also released a song on iTunes and acted in Australian musicals and films including ‘Red Dog True Blue.’

Similarly, Mitchell Ross, also a proud indigenous entrepreneur from south east Sydney, has founded several companies such as ‘Muru Office Supplies’. Muru Office Supplies, originally called ‘Muru Group, was founded in 2012 and sells IT products to mainly corporate and government buyers. In 2014, the business forged a partnership with Complete Office Supplies (COS), Australia’s largest family owned workplace supplies provider, resulting in the name change to Muru Office Supplies (MOS). MOS has annual revenues of $7M and contracts with customers such as KPMG, PwC, Fortescue Metals Group, The Department of Defence and the Australian Taxation Department.

“I wanted to create a business to prove to some of those people who think we (indigenous people) can’t do great things, that we can do great things. We are not just people who are dependent on welfare, we can actually create really successful businesses,” he says.

Ross was in two minds whether or not to use a business name reflective of his family heritage, like so many other indigenous businesses.

Ross also wanted the meaning of the name Muru (pathway) to reflect his entrepreneurial journey he had taken and also his hope to one day create a pathway for other indigenous people through employment and mentoring.

After leaving school in 2000, Ross’s first attempt at business in 2004 was a complete failure.

“I worked in IT for four years after high school and I just decided to start my own business doing the same thing but I wasn’t really ready for what was involved with running your own business…I knew how to do the work but just not the level of commitment required,” he admits.

“Education is a high priority. The important thing about education is that a lot of educational institutions and services these days are student-centred learning and don’t understand the different ways that people consume information. So that’s one of the things that really needs to be addressed when looking at indigenous education and how this contributes to indigenous people then moving into new roles or establishing new businesses,” he says.

Alec and Ross are also strong supporters of education for indigenous people. Ross is currently studying a Masters of Business Administration at the University of New South Wales part-time. This was only possible after receiving a scholarship from an indigenous man, David Liddiard who runs ‘Origin Insurance’, a company that funds a scholarship that puts indigenous people through university.

These businesses are examples of the changing face of contemporary Australia.

Humans vs Driverless cars: which one is safer?

By: Rizna Mutmainah It’s 2018 and although flying cars still don’t exist, new technology in the form of driverless cars is slowly emerging. Car manufacturers like Volvo, Tesla and BMW and other companies are already working on driverless cars. With a possible future where driverless cars may dominate our roads, locals express their opinions on whether […]

Government’s next call of duty – subsidising the Australian games industry.

Video games are played by 70% of Australians and are worth $3 billion to the economy, so why has the government refused to subsidise the industry? Representatives for the games industry have become fed up with the lack of government support and have pointed to the generous subsidies provided to the film and television industries.  […]

The Anti-Pandas: ugly endangered creatures that deserve a chance.

By Grace Robinson-Tagg With the distinct sounds and smells of animals permeating the air at Taronga zoo, people push to the front to get a close look at the tall, elegant tiger in its luxurious jungle enclosure. Next to it, a native Australian bat family sleeps in a small tree, with just one lone person […]