“My dad once told my auntie, ‘Felix (my brother) will be a good artist, but Venus will be a great one.’” 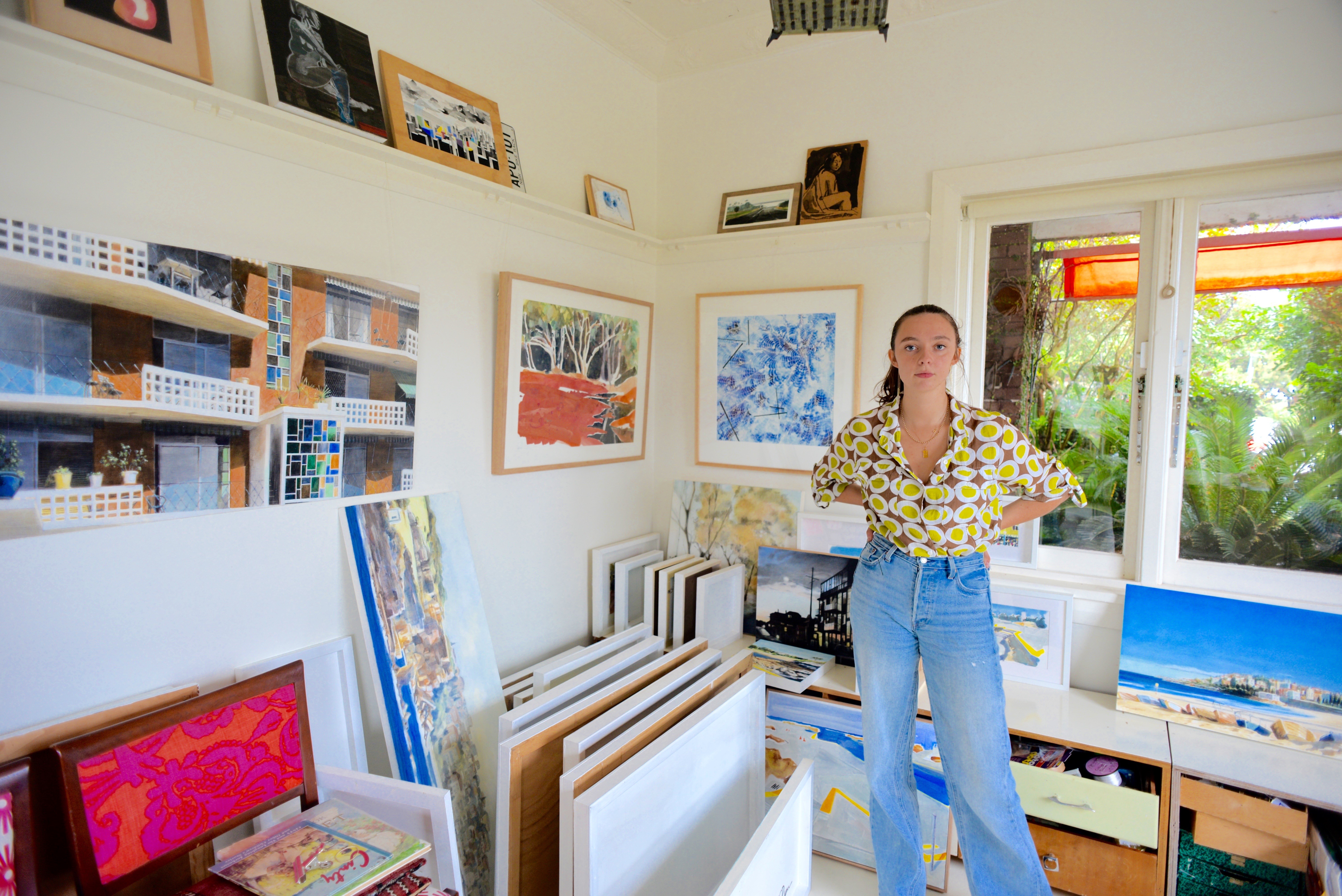 19-year-old Venus Lacoste hasn’t let the ball drop once since her breakout success at the 2018 ARTEXPRESS exhibition, having produced a prolific body of work between then and her recent first place win in the 2019 International Women’s Day Art Prize on March 2.

“You’ve got to produce a shit load of art if you want to survive,” she says. “Don’t stop producing.”

Eager to build her reputation, the determined young talent has been competing in art prizes across Sydney since her final year of high school in 2017. Lacoste says these competitions are “a great way to get your work out there and your name recognised”.

“They always push you to produce new ideas, because usually you tailor what you make according to the prize.

“You need to make the effort to apply…if you don’t apply, you don’t win,” she says.

Her work My Room won first prize in Randwick City Council’s IWD Art Prize this year. The expressive line drawing is a playful rendering of her bedroom, the intimate space in which she constantly practices and perfects her craft. Lacoste says that in this space, “just doing even one sketch a day I can see myself improving, and it’s one of the most rewarding things about all of this.”

However, her proudest accomplishment was completing Abstraction of Scale, an epic intricate drawing chosen by the NSW Department of Education for the 2018 ARTEXPRESS Exhibition, which showcases exemplary artworks created by visual arts students for the HSC.

“‘How long did it take?’ is personally my least favourite question, I hate it,” she says.

“The artwork took about a year to complete. The man hours that went into the piece, but also time coming up with relevant ideas and sourcing materials, really made it worth it,” she recalls. “It paid off in the end.”

The ambitious piece, consisting of four panels measuring 1.2m by 1.2m each, was shown at the Orange Regional Gallery and the Hazelhurst Gallery, and has since been sold for $800 to her former high school, the International Grammar School.

Lacoste attributes much of her talent and drive to her upbringing. With a mother and brother who are practicing artists and an architect for a father, she hails from a family completely immersed in the visual arts.

“I’ve been doing [art] from such a young age,” she says. “You’ve just got to nurture it…I’ve had paints, paper, pencils, and sketchbooks around me all the time.”

“If I ever said I was bored, mum would say, ‘Draw something then!’” she laughs.

Lacoste admits that her family’s influence pushed her willingly into the creative arts and helped her cultivate the mindset that she needs to succeed.

“We’re always comparing each other’s work,” she says. “You’re never going to get more honest feedback than from another artist.”

Leaving high school with a foothold in the art scene, Lacoste decided to pursue it as a career and enrolled to study a Bachelor of Fine Arts.

“When I graduated from high school, I wasn’t sure if this was what I wanted to do. I loved biology in school – but when I was looking for courses that interested me, none of them excited me except for the National Art School.

“I have strong views on the environment, being a woman, supporting other women…I realised I had a lot to say, but didn’t know how to say it. [At the National Art School] I learn how to produce work that gives me a voice about the things I believe in.

“At the moment I’m using as many styles as I can to conquer them all and eventually do whatever I want as an artist.”

Although enthusiastic about her education at the NAS, Lacoste admits that the financial investment of $12,500 a year for her three-year degree is stressful and serves as motivation to be diligent in her studies.

“My mum is an amazing painter and never went to art school,” she says. “The fees are enormous and it’s not subsidised by the government. You’re basically starting your life in a huge amount of debt… keeping that in mind, you need to get the most out of it.

“I’m there every day, trying to milk my lecturers and teachers for every bit of advice they can offer… these are opportunities and resources you could never get outside of art school.”

Attending art school is as demanding personally, socially and creatively as it is financially, says Lacoste, who describes life at the NAS as “intense”. With 30 contact hours in her first year, and 23 in her second, Lacoste spends much of her time surrounded by her peers, which makes the competitiveness and pressure to perform ever-present.

“I definitely felt I wasn’t good enough in first year,” she admits. “There aren’t many group projects…so every day is a comparison.”

However, she chooses to look at the experience optimistically, noting that the challenging atmosphere at school is a microcosm of the greater art world beyond it. For Lacoste, distinguishing yourself in that world is all about the social aspect of the industry.

“Socialising and immersing yourself within the field is the most important part,” she asserts. “My parents know people, my brother knows people…[At the NAS] you’re spending three years working with a cohort of up-and-coming artists, meeting people who run galleries, making useful contacts.”

Lacoste warns budding artists starting their career that they must prepare to be persistent and “elbow your way in” to be recognised.

“Even if you are the best painter in the world, if you don’t put yourself out there or promote yourself, you won’t get anywhere. Social media is a massive way to become known.”

“It’s a combination of putting yourself out there and constantly improving.”

Continuing to hone her skills and soak up life experience, Venus Lacoste is eager to uncover the next step in her undoubtedly rousing career.

“Putting on a show is definitely something I want to do in the near future, potentially even this year,” she says. “I would definitely love to travel and expand my artistic vocabulary overseas.”

“Ultimately, I want to make art that expresses my ideas in a way that works and evolves.”

Are Women Being Kept From Academics? Professors From Major Universities Around the Globe Give Their Opinions

by Sameera Pillai A group of students have turned their hand to manufacturing and driving race cars, now they talk to us about the thrills and spills of emulating F1-style motorsports.  An assortment of university students, wearing black and red t-shirts, stand huddled together in front of a track, cheering for a team member who speeds past […]